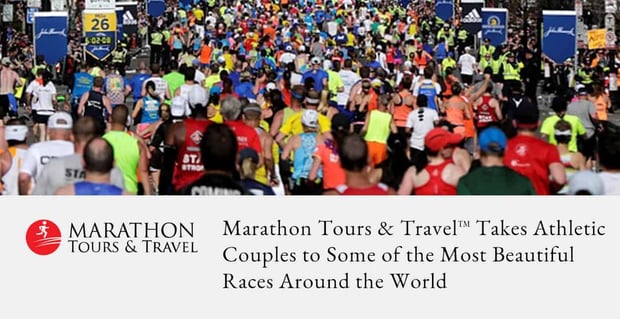 The Short Version: More than 40 years ago, the founder of Marathon Tours & Travel understood how enjoyable it was to run races around the world. Now, they take individuals and couples who love running to global destinations for 10Ks, half-marathons, and marathons. Some die-hard runners even aim to become members of the Seven Continents Club, an elite group of people who have completed marathons on all seven continents. Marathon Tours & Travels itineraries simplify taking part in some of the world’s most scenic races.

Dana Sawatzky is an avid marathon runner, and she’d run several before she invited her friend Ben Tatterton to run the Antarctica Marathon with her in 2017. They planned the trip in 2014 with Marathon Tours & Travel, a company that takes runners to some of the world’s most scenic races.

Over the three years between signing up and running the race, the dynamics between Dana and Ben changed from friendly to romantic. By 2017, when they were set to depart for Antarctica, they’d been dating for a while.

On their last day in Antarctica, Ben proposed. Later, on a boat back to Argentina, Dana and Ben decided to get married on the spot. After all, how much better could a marriage story get?

“On the ship’s journey back to Argentina, we got it into our heads that we should get married right away; we were in international waters, and a ship captain could officiate the ceremony. So we took the plunge and had a ridiculous runaway marriage at sea,” Dana wrote about the experience.

Dana and Ben attribute some of their bond to running, and they have participated in marathons together on all seven continents. Their relationship was built on running together, and Marathon Tours & Travel has helped them see the world.

The company has been simplifying racing and travel for runners for more than 40 years.

“CEO and Founder Thom Gilligan started with a group bus trip from Boston to the New York City Marathon in 1979 and followed that by bringing more than 120 travelers to the Bermuda Marathon in January 1980,” Karen Hoch, Marathon Tours & Travel Marketing Manager told us.

Today, the travel company helps many couples run the most legendary races together and make friends who share their passion.

Although races are typically the centerpiece of a Marathon Tours & Travel excursion, most runners don’t just travel to an exotic location, run in the event, and then leave. Many are just as interested in exploring the country as they are in running. Some runners even bring along their non-running partners to see the sights, as well.

“We include social events such as a welcome reception, pre-race pasta dinner, and post-race celebratory event,” Karen said.

If you’re looking for a trip that includes a scenic race and other excursions, you and your partner could opt for the popular Baxters Loch Ness Marathon in the Scottish Highlands near the famous Loch Ness.

“We have two days where you can select one of three activities ranging from active to culture, to history,” Karen said.

The company tailors the activities outside of the race to what’s popular in the region. For instance, travelers to Africa often go on safari. In Patagonia, they can hike. In Israel, they visit historical and biblical sites while in Antarctica, they can go kayaking and trekking.

Many couples are so impressed by the company’s offerings that they plan multiple trips. If they’ve been on an excursion before, they may make arrangements with other couples they met on previous trips.

Perhaps the greatest benefit of the trips, though, is that they are thoroughly planned. Couples don’t have to hunt for airfare or a hotel or wonder if they’re seeing the best sights.

“We remove the stress of planning for clients so they can completely enjoy the experience and focus on their race event. And we create an atmosphere of camaraderie for relationships to form and flourish,” Karen said.

Marathon runners have plenty of options to explore around the world. Those who enjoy extreme temperatures may consider running a desert marathon in the city of Petra, Jordan. Marathon Tours & Travel books packages of four days and five nights in the city, along with hotel accommodations, an English-speaking guide, and optional add-on excursions that take couples to other cities in the country after the race is over.

Or, clients could try one of the world’s most extreme races, the Antarctica Marathon & Half-Marathon. It starts with three nights in Buenos Aires to participate in training runs and meet fellow runners. Then, guests head to the southern tip of the country to board a ship that will take them to King George’s Island, the site of the race.

The company will help ultramarathoners participate in the Comrades 89K, a strenuous 89K from Pietermaritzburg to Durban, South Africa.

The company has packages for nearly every different type of runner. Marathon Tours & Travel works hard to combine running and cultural experiences, and it makes arrangements for more than 40 races on all seven continents.

And the idea of racing on all seven continents appeals to quite a few of the agency’s clients. In 1995, the company founded the Seven Continents Club, which requires runners to complete a marathon on each continent to gain entry.

“Today, we have more than 7,000 members, and we continue to service clients interested in pursuing their seven continents goal. In addition, the SCC serves as a VIP global frequent traveler club for runners who have a passion for traveling and running in amazing destinations around the world,” said Karen.

Marathon Tours & Travel: Build Connections with Your Partner and Other Running Enthusiasts

For couples who run, taking a trip with Marathon Tours & Travel is an excellent opportunity to meet like-minded folks. Karen said the trips attract people from all walks of life, including doctors, nurses, teachers, entrepreneurs, lawyers, and retirees. Some are competitive runners with a lot of experience, while others run for recreation.

“What brings these runners together is their adventurous spirit and love of travel. The passion for running is already a common denominator, but the addition of wanting to experience new cultures solidifies the camaraderie that many find,” she said.

The Massachusetts-based Marathon Tours & Travel team understands the feeling because many are runners themselves. All team members have competed in races, while Thom has run the Boston Marathon 23 times. The company’s president Jeff Adams has even won an Abbott World Marathon Majors Six Star Finisher medal. This distinction indicates that someone has qualified for and completed six of the world’s most elite marathons.

The team also has travel specialists who help participants with medical consultancy, race logistics, and photography. That familiarity with running and traveling helps them provide clients with what they desire.

Though tourism is at a relative standstill during the COVID-19 pandemic, Marathon Tours & Travel is hopeful about the future. The company is offering a robust race schedule for the fall since many spring and summer marathons have been postponed. Furthermore, the team is hard at work communicating with clients to modify current and future plans.

But, as Karen said, Marathon Tours & Travel clients are a hearty group.

“Runners are determined. Even in self-quarantine, runners around the globe find optimism. They find ways to continue loving their sport, and they keep their dream of future travel alive,” she said.