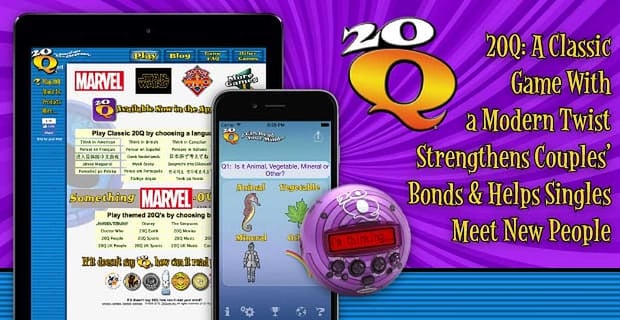 The Short Version: People have been coming together to play the timeless guessing game 20 Questions since the 19th century. Roughly 30 years ago, Robin Burgener had an idea to modernize the classic and devised the seemingly psychic artificial intelligence (AI) now known as 20Q. Because Robin’s algorithm guesses right 80% of the time (98% if 25 questions are asked), many find it a bit spooky, but it’s really just a great way to have fun and connect with others. Couples who try to beat the game and guess what their partner is thinking before the AI gain bonding opportunities and insight into each other’s thought patterns. Some are even finding 20Q to be an effective icebreaker and are using the game to start conversations with new people by trying to predict what’s on their mind.

The earliest records of the classic quiz game 20 Questions trace back to the 19th century. The game was popular with the ladies and gentlemen of the day, providing hours of entertainment when socializing in their Victorian parlors and sitting rooms.

Since its early incarnation, 20 Questions has gone through many iterations. Invariably, the game has acted as a way to get to know people and how they think. And nowhere is this more important than in relationships. In fact, The Couples Institute recommends playing 20 Questions to transition away from mundane, day-to-day topics and into new ones that encourage greater intimacy.

While the century-old game was still being widely played, Robin Burgener, in a flash of inspiration 30 years ago, thought it could be improved and modernized. So he did what any other game lover would do. He rolled up his sleeves and built 20Q, an artificial intelligence (AI) with the ability guess people’s thoughts.

Robin Burgener developed 20Q in 1988 and the AI has been guessing people’s thoughts ever since.

Since 1998, people have been using Robin’s invention to bond while having fun. By trying to beat the AI and guess answers before the computer, couples gain a better understanding into what makes each other tick. This type of play has been found to strengthen relationships and cement connections between couples.

For those looking to meet new people, 20Q’s psychic-like abilities provide a great icebreaker. Many are using the game as a way to start conversations by trying to figure out what’s on one another’s mind. Available in its original form or in new pop culture-themed varieties, such as Star Wars, Disney, and The Simpsons, 20Q offers couples diversions from the every day and an avenue to form deeper relationships.

It seems impossible that a computer can guess your thoughts or read your mind, but, in actuality, the idea is not that far-fetched. Robin told us it’s all based on computer science.

“I was experimenting with artificial intelligence, and I came up with an algorithm,” he said. “It turned out it was perfect for playing a game of 20 questions.”

Robin convinced his friends and acquaintances to play his game, and people loved it. Because of the nature of the algorithm, the AI learned more and more with each person who played the game.

With each game played, 20Q learns more about how humans think and becomes better at guessing.

This was back in 1988, and, over the next few years, Robin found 20Q taking off in popularity. So he put it online in 1995. As a result, more than 88 million games have been played by people intrigued by the “mind reading” machine.

This wide use is likely due to 20Q’s success rate. The game guesses correctly about 80% of the time (98% if you ask 25 questions) and gives you an opportunity to teach the game what it doesn’t already know.

20Q also provides a list of contradictions when you’re finished to explain how your answers may not have matched the most common answers. Worry not, though. Many people would classify a dolphin as a fish even though it isn’t. Remember, 20Q doesn’t rely on perfect knowledge; it relies on people knowledge.

Couples Have Fun & Get to Know Each Other Through Questions

20Q works by learning about thought processes, which is why the platform can offer couples opportunities to learn about how each other thinks.

“Relationships are really all about the questions,” Robin said. “20Q is a fun way for people to get to know each other. They can share what they’re thinking or go through the game together; one person can guess what the other person has thought of.”

For instance, when thinking about an animal, you can guess if your partner would choose their favorite animal or try to throw 20Q off by selecting something more exotic. These small, seemingly innocent questions can uncover just how much couples know about not only the things each other thinks about most but also how they think.

Trying to outwit the AI as your partner plays also offers bonding opportunities. Couples can have lively debates about which questions they think their partner answered incorrectly. If you’re playing in one of the pop culture categories, for example, and 20Q asks if Lando Calrissian from “Star Wars” is a villain, the answer may be a bit fuzzy. 20Q offers a Sometimes answer, which can lead to a philosophical conversation on what constitutes good and evil in a galaxy far, far away.

In addition to helping strengthen bonds, 20Q can help you mingle and start conversations. Robin told us about how 20Q’s Name Game feature can be used as a way to meet people. Asking someone to play the game to see if you can guess their name is more original than a standard or cheesy pick-up line. Robin admitted it may not end in a long-term relationship every time, but 20Q has helped get people talking.

Available as an app or in handheld varieties, you can use 20Q to start conversations anywhere.

20Q is also a great tool for first dates when the conversation can sometimes be strained. Daters can pull out 20Q and have a friendly bit of competition and challenge each other to see who can guess what the other’s thinking before the AI does.

This gives people the opportunity to learn a bunch of funny and interesting information they normally wouldn’t on a first date. It helps take the pressure off talking about the awkwardly big topics on a first date (marriage, religion, politics) or the standard “What do you do for a living?” The game’s interactive nature can initiate some good-spirited smack-talking that ultimately result in lots of laughs.

Robin’s invention has proven to be wildly addictive. There have been more than 1.75 billion questions asked and 88 million games played online, and it’s offered in 22 languages. Each day, upward of 50,000 people visit the site for about 30 minutes to play one of the 17 different themed games available. People just can’t seem to get enough of it.

Whether you’re on a first date or the 30th date, 20Q can provide the entertainment. This modernized version of the 19th-century classic is continuing the tradition of encouraging greater intimacy between couples and breaking the ice among strangers.

“Questions are important in life and relationships,” Robin said. “And 20Q can help you answer them.”