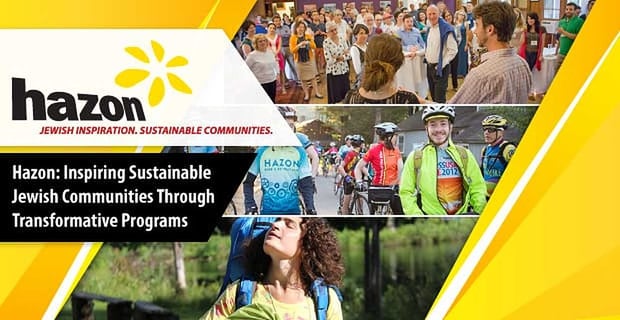 Hazon: On a Mission to Inspire Sustainable Jewish Communities Through Transformative Programs & Events That Bring People Together

The Short Version: Deriving its name from the Hebrew word meaning vision, Hazon is an organization committed to creating healthy and sustainable communities in the Jewish world and beyond. The nonprofit is known for its multi-generational programs that focus on enacting social and environmental change in Israel and North America through transformative experiences, thought leadership, and advocacy. Hazon hosts an array of events throughout the year, such as bike riding fundraisers in New York and Israel, that offer prime opportunities to give back to the community while having fun and connecting with others. The organization is also known for its Isabella Freedman Jewish Retreat Center, which is home to immersive programs, including holiday festival retreats, an annual sustainable food conference, and the popular three-month Adamah Fellowship that seeks to “cultivate the soil and the soul” through Jewish farming. As an organization focused on shared values and meaningful work, Hazon is fostering lasting relationships — both platonic and romantic — between those who volunteer and participate in its projects and programs.

In 2007, Adam Sher was looking for an internship that would enable him to give back to the community. When he stumbled upon Hazon — a Jewish nonprofit committed to fostering positive social and environmental change — he knew he had found the right organization.

Adam accepted a position at Hazon’s Isabella Freedman Jewish Retreat Center in Connecticut. During his first Shabbat dinner at the center, he met Meg — a staffer working for the organization’s Adamah farm fellowship program — and a relationship slowly began to build.

“We became friends over a period of months because there are so many different ways to have meaningful experiences with people in a place like this,” Adam said. “You learn together, you sing together, you eat together, you work on the farm together, you work in the kitchen together. You just really get to know each other in a much deeper way than you might otherwise when in the city and dating.”

Over time, Adam and Meg started dating, but Adam told us it wasn’t traditional dating — it was more because they lived in the Isabella Freedman community together. The retreat center offers events where people can come for just a long weekend or a week, and Adam said he’s seen new relationships form quickly — even in that short of a timespan. It’s like 10 dates all rolled into one.

“By the time we decided we were going to be in a relationship together, we kind of had gone through that entire process where you’re vetting the other person and figuring out if you’re a match,” he said. “We didn’t have to sit at restaurant tables or in movies to get to know each other.”

The two lived and worked together at the retreat for several years, and Adam eventually became the general manager. After a few years, the two got married at Isabella Freedman, and they now have a young child with a second on the way.

“We’re really a homegrown Isabella Freedman family,” Adam said. “It’s really special, and we also know that we’re kind of in a cohort of people that’s always growing that met and grew their relationship one way or another here.”

Adam told us he’s seen countless other people couple up through Hazon, whether they’re staff, short-term retreat visitors, or fellowship participants — and it’s happened among people of all ages.

Hazon’s retreat center brings together people with shared beliefs and passions about Judaism and sustainability, and puts them in a 360-degree lived experience. This helps participants easily forge relationships.

“It just kind of naturally happens,” Adam said. “It creates the environment where it’s conducive to people having a good experience and meeting new people. It just does it in a much more organic and effective way without it being a singles weekend, which has a totally different feeling.”

Hazon was founded in 2000 with a bike ride across the country and, ever since, has hosted an annual “New York Ride & Retreat” over Labor Day weekend. The multi-day ride raises funds for Hazon and delivers an opportunity for people of all ages and backgrounds to come together.

The Ride weekend, which begins with a Shabbat retreat at Isabella Freedman, is another community-focused event where participants relax, eat fresh farm-to-table food, and attend workshops on topics such as caring where your food comes from and animal welfare.

On Sunday and Monday of Labor Day weekend, participants cycle through the Berkshires. While the athletic component is certainly important, Lisa Kaplan, Hazon’s Marketing & Communications Manager, told us it’s more about people who are doing something together and biking for a cause. They’re pedaling for change because they’re raising money for Hazon and accomplishing something together. It’s a great way for people to meet each other who share interests and values.

David Broxmeyer found this to be the case. He and his partner, Naava, were both involved with Hazon before they met, and it led them to each other. Naava had previously ridden in a Hazon Ride, and David had volunteered at one. After seeing how much fun everyone had, David impulsively bought a bike and started training for that year’s ride.

He met Naava in May 2016, and, within a month of knowing each other, she signed up for the ride, too.

“We knew it would lead to an incredible bonding experience for a new relationship,” David said.

They trained together, threw a fundraising event together, and bonded over their passion of raising awareness for the environment.

“The bike ride and fundraising was not a one-time event; it was the entire summer of 2016,” David said. “Having a goal that lasted so long was very important early in our relationship.”

He told us that, while neither he nor Naava originally shared biking as a passion, they both held the long-term goal to train for the ride and raise money for a good cause.

“It provided us with the tools needed to develop a strong connection and admiration for one another,” he said.

Weaving Together Judaism & Farming in the Adamah Fellowship

One of the flagship programs offered by Hazon is the Adamah Fellowship at Isabella Freedman Jewish Retreat Center. It’s an immersive Jewish farming program of two to three months for people aged 20 to 35, and participants live on-site and work on the farm.

The goal is to have participants grow organic produce and learn about animal husbandry while cultivating experiences with ecology, social justice, and spirituality. Participants live together, work together, and celebrate Jewish holidays together.

Adam noted that, while the Jewish faith is a rich part of the experience, the culture at the retreat is very non-prescriptive. He says people often think of Judaism and other religions as telling you to follow specific rules and laws.

“This place is very open and pluralistic and realizes there are as many types of ways to do Judaism as there are people.” Adam said, “There are many paths up the mountain and they’re all good. There’s a healthy respect for creativity and personal judgment.”

He said since the environment is 360-degree living — not just a synagogue you go to on Fridays or Saturdays — everyone is allowed to figure out what Judaism looks like for themselves.

The Teva Program: A Rich, Educational Experience for Teachers

Teva is another long-term program offered by Hazon at the retreat center. Here, Hazon trains Jewish educators in their 20s and 30s while they live on-site. Students from Jewish day schools visit the retreat center in the fall, and the educators get to use their experience hands-on with them.

They learn something called Jewish Outdoor, Food, Farming, and Environmental Education, or JOFEE. Through these programs, people get in touch with their shared values and traditions and learn how to use those values in modern life.

Because of the immersive, meaningful community created around shared values, many participants in the Adamah and Teva programs have started dating and gotten married.

Steve S. had difficulty dating after high school, feeling unsure of himself and struggling to make himself vulnerable. He always knew he wanted to get married and start a family, but he wasn’t able to make it happen and said he was in a rut. He attended the Adamah Fellowship for three months because its core principles of Judaism, agriculture, and environmentalism were all lifelong interests of his. During his fellowship, he met Glenn, a retreat staffer.

Steve describes the fellowship as an intensive leadership program, and says it gave him much deeper insight into his tendencies and emotions.

At the end of the fellowship, Steve was offered the job of the dairy manager and ended up co-managing a 40-goat barnyard with Glenn. At the beginning, he thought dating wouldn’t work, but, within two months, they began seeing each other.

The two were eventually married and credit their initial connection to being involved with Hazon’s program.

Steve and Glenn — just as David and Naava and Adam and Meg — bonded over a shared devotion to Judaism and a commitment to leaving the world better than they found it. The same can be said for the almost countless couples who’ve connected at Hazon.