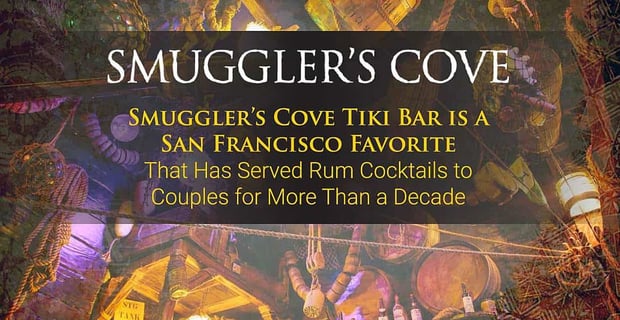 The Short Version: As one of the first to lead the resurgence of tiki bars in the U.S., San Francisco’s Smuggler’s Cove has always been a trendsetter. Since it opened in 2009, the popular date spot has served refreshing rum drinks that represent the spirit’s diverse 300-year history. Founder Martin Cate is passionate about rum, which he said has had its reputation tarnished by sickly-sweet resort cocktails. That’s why Smuggler’s Cove uses only fresh and natural ingredients to create historically accurate and creative cocktails.

Classic tiki bars have seen a resurgence in the U.S. over the past decade with their delicious rum concoctions and relaxed atmospheres that make for casual, fun date nights. But the trend had to start somewhere.

When it opened in 2009, San Francisco’s Smuggler’s Cove was one of the first tiki bars to rekindle the movement, and it began with returning the focus where it should be — rum drinks and their ingredients.

“When we started 10 years ago, the tiki revival was in its infancy,” said Smuggler’s Cove Founder Martin Cate. “We wanted to create a space that was a celebration of rum and rum cocktails.”

When Martin set out to open a tiki bar — which were popular from the 1930s through the 1960s — he envisioned a space that looked like those classic establishments and that served the drinks they popularized. Unlike the too-sweet rum drinks of later eras, those mid-century cocktails used fresh ingredients and were made to highlight the spirit.

“When Don the Beachcomber created the tiki bar in 1933, he blended rums,” Martin said. “Back then, blending spirits was a big deal. It was an interesting thing to do and created a nuanced flavor profile in the cocktail.”

Martin calls these mid-century drinks on the Smuggler’s Cove menu “vintage exotic cocktails,” but he also recognized that they captured a limited picture of the 300-year-history of rum. That’s why he added drinks to expand the horizons of rum lovers in the Bay Area.

“We also wanted to feature regional Caribbean drinks, Royal Navy drinks, and Prohibition Era Cuban drinks so patrons can get a complete picture,” Martin said. “Our menu has more than 80 cocktails.”

Over the last decade, that commitment to quality has earned Smuggler’s Cove plenty of accolades and even a James Beard Foundation Award for Excellence. However, the accomplishment Martin and his team are most proud of is helping kick-start the revival of the classic tiki bar trend across the United States.

When Martin and his wife Rebecca decided to give a nod to tradition in Smuggler’s Cove’s cocktail list, they had plenty of misconceptions with which to contend. Though the mid-20th century was kind to rum cocktails, the later decades were not.

“Rum drinks are fresh and balanced, but in the 1970s and ‘80s, these tiki bars fell apart,” he said. “You would go to a resort and get something pink and chemical and the drinks started developing a bad reputation.”

To help change public perception of these cocktails, Martin knew Smuggler’s Cove had to start with the best ingredients. The establishment chose 750 vintage and premium rums to develop its cocktails — no well drinks to be found. Each drink incorporates the most historically accurate or flavorful rum possible for that particular cocktail.

“The right rum for the right drink is our ultimate goal,” Martin said.

Smuggler’s Cove uses classic tiki recipes to create its offerings. In Martin’s view, many of these older recipes aren’t markedly different from modern craft cocktails that focus on high-quality ingredients and precise portions.

For example, in the Exotic Cocktails From Legendary Tiki Bars section of its menu, Smuggler’s Cove offers a Pupule, made with rum, allspice, cinnamon, vanilla, fresh lime, and orange.

“We know you had a terrible Bahama Mama at some resort, but that’s not what we’re about,” Martin said. “Our mission is to change what you think about rum cocktails.”

A Surprising Date Night From Start to Finish

Smuggler’s Cove is an off-the-beaten-path date night as the bar is completely hidden from the street.

“It’s completely invisible from the outside, so it’s kind of like a speakeasy, but there is no speakeasy pretension,” Martin said.

Many first-time visitors are surprised that a bar as lively as Smuggler’s Cove was hiding in plain sight. The difference between the nondescript outside and the wild inside is significant. Inside, the bar resembles a pirate ship, with multicolor lights glowing from the ceiling, ropes, netting, and tropical-themed glassware adding to the decor.

“The place is full of old decor,” Martin said. “The drinks are engaging and interesting, but the space lends itself to conversations, too. You’ll look around and say, what’s that?”

The decor at Smuggler’s Cove can keep daters talking long into the night.

Once couples have found their way inside, they can find a nook or cranny where they can sip a beverage. For dates, Martin recommends one of the many drinks on the menu that come in a bowl with two long straws. While these drinks might be complex, they’re easy to enjoy.

“A couple came in and asked me if I knew what they called this drink at their house. Then the man whipped out a picture of their 2-year-old daughter and said, ‘We call this drink the babymaker!’” Martin said with a laugh.

The unique atmosphere makes Smuggler’s Cove a popular place for proposals, too. Martin shared a story of how his staff once covered the bar with rose petals and candles for a patron’s marriage proposal. And some of those marriages started at Smuggler’s Cove.

“We’ve had a lot of first dates that have turned into marriages,” Martin said.

Not only was Smuggler’s Cove one of the first establishments of the modern tiki bar era, but it has thrived because of its devotion to crafting authentic cocktails. Another reason it has remained so popular for a decade is its dedicated team.

“Our bar team is full of veteran bartenders, and all of them have been with us for quite a while,” Martin said.

Smuggler’s Cove’s longest-serving bartender, Melissa, has been with the team all 10 years of its operation.

The diverse range of customers at Smuggler’s Cove also keeps the bar lively. It draws crowds from 21-year-olds to couples in their 50s, depending on the time of day.

“People tend to fall for the atmosphere and cocktails at any age,” Martin said.

With parties planned throughout the year, Smuggler’s Cove is celebrating its 10th anniversary in style.

Smuggler’s Cove is planning celebrations and offering new merchandise throughout 2019 to mark its 10th anniversary. When asked if focusing on rum drinks for 10 years has been difficult, Martin said that rum makes for an endless number of cocktail creations.

“Rum is the most diverse liquor on earth,” he said. “You can have rums that are woody and oaky for sophisticated cocktails, or you can use rums that are flavorful that stand up to other ingredients. You can blend rums to get interesting results.”

This spirit has certainly kept San Francisco crowds interested since 2009. But what Martin loves seeing the most is the look on someone’s face the first time they enter the bar.

“We love that our place creates surprise,” he said. “That really makes me smile.”