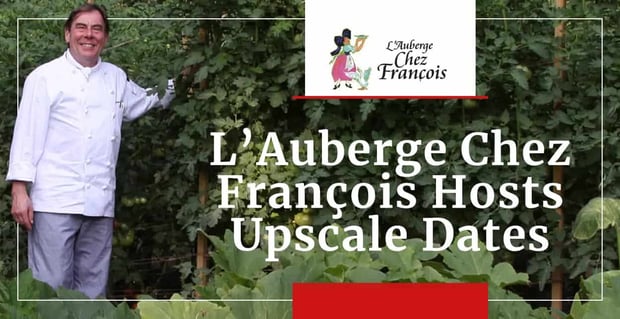 The Short Version: L’Auberge Chez François is a landmark restaurant in the D.C. area. Its classic French cuisine has tantalized the taste buds of generations of foodies, and it continues to see loyal patrons returning for many of life’s greatest milestones. François Haeringer made fine dining his life’s work, opening his first restaurant to a packed crowd during a thunderstorm in 1954. The original Chez François on Connecticut Avenue is now an office building, but L’Auberge Chez François continues the Haeringer family tradition and serves exquisite French cuisine.

François Haeringer, the founder of L’Auberge Chez François in Great Falls, Virginia, was born in 1919 in the Alsatian town of Obernai. He was named François in recognition of the fact that he was the first child born in Alsace after the region was returned to France at the end of WWI.

At age 16, François began working as an apprentice at a local restaurant. He later moved to Paris to perfect his skills at the Hotel Plaza Athénée. During WWII, he was captured by the Germans and sent to work as a cook at the Four Seasons hotel in Munich.

After the war, François got married and moved to the U.S. He did not speak English when he arrived on the East Coast, but he soon learned the language while working at his uncle’s restaurant in Washington, D.C.

In 1954, at the age of 35, François realized his dream to be a restaurant owner, and Chez François was born. The restaurant served classic French fare at affordable prices and soon became a local sensation, serving more than 500 meals a day.

L’Auberge Chez François opened in 1975 with François as the owner and his oldest son Jacques as Chef de Cuisine. The restaurant sits on six acres in the rolling green hills of Great Falls, Virginia.

“We opened L’Auberge Chez François with the intention of serving about 75 people a night,” Jacques recalls. “The first night was a bit of a disaster. Papa could not say no to so many of his loyal customers, and the restaurant was overbooked. Mercifully, a thunderstorm knocked out the power.”

To this day, L’Auberge Chez François continues to be an extremely popular place for date nights, anniversary dinners, and celebrations. The dining rooms have a home-like atmosphere and are decorated with Haeringer family heirlooms and murals depicting Haeringer’s birthplace in Obernai, France.

In April 2021, L’Auberge Chez Francois celebrated its 45th year in Great Falls — and a total of 67 years in the D.C. area. This iconic restaurant is part of the fabric of the city. Generations of Washingtonians have spent birthdays, anniversaries, and other milestones here. The patrons have included 12 U.S. Presidents and several celebrities, including Mick Jagger.

Jacques has been the head chef at L’Auberge Chez François since his father passed away in 2010. Jacques learned his culinary skills at the elbow of his father and continues to uphold the traditions that made the restaurant beloved throughout the community.

The prix fixe menu includes an amuse-bouche, an appetizer, a salad, an entrée, and dessert as well as a coffee or tea. The menu has hardly changed so much as a comma over the last few decades, but Jacques does mix things up by offering seasonal specials.

The menu highlights French dishes that have been made at the restaurant for decades.

A basket of garlic toast and the soup of the day come to the table first to satisfy initial hunger, and then diners can choose from a selection of 11 appetizers, three salads, 12 entrées, four shareable sides, and an assortment of hot soufflés, tarts, and other desserts.

The Chateaubriand de l’Auberge is perfect for couples on a date night because it is meant for two people to share. The dish features roasted beef tenderloin topped with a buttery Béarnaise and truffle sauce with a side of seasonal veggies. The beef is melts-in-your-mouth delicious, and its savory flavors transport people to old-world France.

“L’Auberge Chez Francois saves flights of fancy for special events, such as wine dinners,” according to a review by The Washington Post.” Give or take a seasonal garnish or ingredient, its regular menu is all about tradition and consistency.”

After a palate-cleansing lemon sorbet, it’s time for dessert. Whether they’re dipping a spoon into a fluffy meringue or indulging in chocolate soufflé, diners with a sweet tooth certainly won’t be disappointed by the rotating treats offered by the pastry chefs.

L’Auberge Chez Francois is a charming place to take a date, particularly for a special occasion. The staff expertly takes diners from one course to the next and provides sound recommendations to ensure every bite and sip is a positive experience.

L’Auberge Chez Francois has earned acclaim in the D.C. restaurant scene and remained popular through generational changes by sticking to the classics. Customers have raved over the brandy sauces and decadent soufflés, but many say it’s the elegant atmosphere and friendly service that keep them coming back for seconds.

This time-tested restaurant boasts a 4.5-star rating on Yelp and 4.9 stars on Open Table. Many of the reviews tell stories about memorable date nights, anniversary dinners, and marriage proposals.

A Yelp reviewer named Dakota said her boyfriend surprised her by taking her to L’Auberge Chez Francois as a way of treating themselves to something special. After their five-course meal, the couple wandered outside to explore the surrounding greenery and found an intimate spot seated at a fire pit underneath a starry sky. “This was a date night like no other date night,” Dakota said. “The garden, the design, the chef, the food! The night was perfect.”

Like many customers, Dakota had a chance to meet Jacques during her time at the restaurant. The executive chef makes a point to greet customers and add a personal touch to the dining experience.

“L’Auberge is authentic to the food they prepare and present,” said a regular named Lori who has been coming to the restaurant for over 20 years. “They don’t try to be something they’re not. That’s one of the many things I love about this restaurant.”

L’Auberge Chez François has been the backdrop to countless date nights and family celebrations.

Although the past year has been challenging for L’Auberge, the restaurant continues to deliver quality food and world-class service to couples, families, and friends as they emerge from lockdown.

When Joseph and his wife were ready to return to indoor dining, they said they chose L’Auberge for an early dinner. It was their first meal in a restaurant in 14 months. “It was worth the wait,” Joseph said in a review. “Bravo!”

Karisa G. and her husband said they went to the French restaurant for the first time on their anniversary dinner during the COVID-19 pandemic. She said the friendly service and charming decor made them feel comfortable from the beginning.

“You feel like you have pulled up to a place in the French countryside,” Karisa said. “They pride themselves with using ingredients from their garden in their dishes. The food was absolutely fantastic. The lobster and soufflé were my favorite dishes, but I enjoyed everything.”

François Haeringer lived an extraordinary life full of flavor and warm family feelings. His passion for cooking took him from working as a kitchen assistant in the French countryside to becoming a restaurant owner in the bustling streets of D.C. L’Auberge Chez François carries on his legacy with his son Jacques as executive chef.

L’Auberge Chez François delivers a multicourse meal that hearkens back to old-school fine dining. The restaurant gives people the chance to slow down and savor their time together.

Over the years, L’Auberge Chez François has earned recognition as a top date destination for couples celebrating a special occasion and hoping to make memories that’ll last a lifetime. OpenTable even listed the French restaurant among the best 100 romantic restaurants in the U.S.

“We do the French classics without apology,” Jacques said. “A classic, by definition, is something that’s withstood the test of time — with our little twist.”