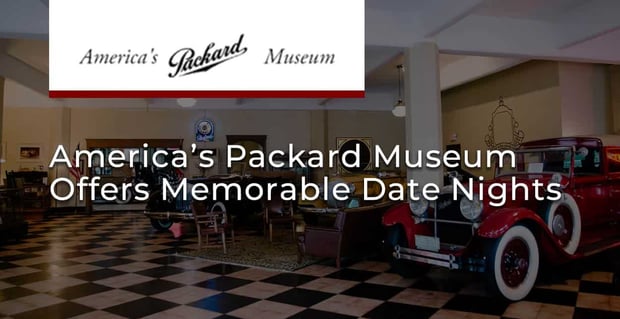 The Short Version: America’s Packard Museum in Dayton, Ohio, takes visitors on a trip back to the golden age of classic cars. Couples can check out the 50 Packard cars on display in the museum, located in an original Packard dealership, and enjoy interactive exhibits on the company’s history. It’s also a popular wedding venue in the area, with a photo opportunity that lets couples feel the wind in their hair in a classic 1921 Packard. For its exhilarating atmosphere that attracts car-loving couples, America’s Packard Museum has earned our Editor’s Choice Award.

Back in the 1920s, a quality date could be as simple as taking a drive around town in a stylish Packard automobile, one of the most popular cars of its time.

America’s Packard Museum teaches couples about that history through its auto exhibits. The museum is located in a former Packard dealership in Dayton, Ohio, restored to recreate the feeling of walking in together to kick the tires on a new model.

“Unlike virtually any other museum in the country, you walk in the front door, and enter a time machine. You’re transported back to the golden age of classic cars,” said Robert Signom III, the museum’s curator and son of Founder Robert Signom II.

America’s Packard Museum is located in a restored Packard dealership in Dayton, Ohio.

The museum opened in 1992, but visitors will feel like they’re in the 1920s as they check out the 50 cars on display. The exhibits also include the story of how the vehicles were sold, serviced, and engineered. Car lovers can learn about the Packard Motorcar Company, including all of the products and philosophies that made its cars such an iconic part of American history.

The museum has also been working to modernize its exhibits while maintaining the historic experience for guests. It has added photo opportunities and interactive displays that will keep visitors engaged and smiling.

While many of the people who visit the museum are older or multigenerational families, the team behind the museum is focused on attracting younger adults who may not know the history behind the brand.

Today, the management team is led by people in their 30s. Robert works alongside Dan Badger, the museum’s Managing Director, who has focused on modernizing its exhibits. Dan is an antique automobile and airplane enthusiast, mechanic, and project manager.

“Dan and I are both in our 30s. Most car collectors are not in their 30s,” Robert said. “It’s our mission to spark interest in the younger generation in these cars because most of these car owners are in their 60s, 70s, and 80s.”

The museum aims to teach visitors about the history of the Packard brand and its contributions to America.

Those young people often find that Packard cars are pretty cool. The vehicles allow them to dream about what it was like to take a road trip across America back when car travel was considered a more sophisticated experience.

Couples can imagine getting dressed up to take a drive because the car’s design is unique and classic. The company’s history is intertwined with the country’s history, and the museum shares it all with visitors.

Along with couples enjoying the exhibits on dates, Robert said that many families also spend a day at the museum. It is perfect for families looking to introduce their children to cars in a pressure-free, fun way. The museum even has a fun room where everyone can put together Packard models, enjoy coloring books, and watch videos.

One of the most popular new exhibits at the museum provides visitors the opportunity to share their experience on social media. Couples can sit in a 1921 classic Packard car to have their photo taken while a fan blows air at them to make it look as if they were driving at full speed.

That’s just one of the museum’s many interactive exhibits, which include tablet-based history lessons that dive into different periods of the Packard brand. It’s been a process to bring modern technology into a historical setting, Robert said.

The museum’s main exhibit allows visitors to see some of the earliest Packard cars.

“It’s hard because we are a museum steeped in the history of automobiles and the history of America,” he said. “So, Dan has been working hard to bring it in a modern world with a modern audience while maintaining the excitement of yesteryear.”

The museum itself is divided into two sections. The first part is the main museum located in the old dealership that dates back to 1917. That’s where visitors find all of the company’s cars manfactured before World War II. Next to the dealership is the Packard Pavilion, built in 1936, and where the cars built after World War II are displayed.

The museum is currently working on a new exhibit called “Packards at War: Work to Win.” It will focus on the work the company did during World War I and World War II, and is expected to open this fall. Visitors can learn about how Packard produced destroyer and minesweeper engines, aircraft engines, cars for generals, and even the engines for B-52 bombers.

The museum is an excellent place for couples who are auto enthusiasts. But it’s much more than just a collection of cars, Robert said.

“We are also an educational institution, not just through programs for young people and museum staff, but also with a scholarly library focused on Packard and information of other classic cars,” he said. “People come and visit us when writing magazine articles, books, and dissertations about classic automobiles.”

It’s a popular wedding venue in Dayton, Ohio, as well. The museum hosts 30 weddings per year and its facilities can accommodate up to 300 guests.

Couples can even hold the service in the main museum and have the reception in the pavilion. The wedding party can also opt for packages with rides in cars for unique photos.

Couples often have weddings at the museum surrounded by classic automobiles.

Docents and volunteer staff can also be on hand to answer questions about Packards for wedding guests and may even dress up in period costumes. They can be chauffeurs, salesmen, and service technicians. Or, they can wear formal dress attire.

The museum hosts large events three to four times a year when it opens its space in the evenings. Those are fun date activities and may include dancing, screening a classic film, or a performance by a jazz band.

Robert said that he expected the museum to reopen to visitors from noon to 5 p.m. daily in late August or early September after shutting down due to the Covi-19 pandemic.

“We want to open up, but we want to be very safe and careful,” he said. “We have a great staff that has been instrumental in keeping the place disinfected and clean, and we want to keep the cars running, driving, and clean.”