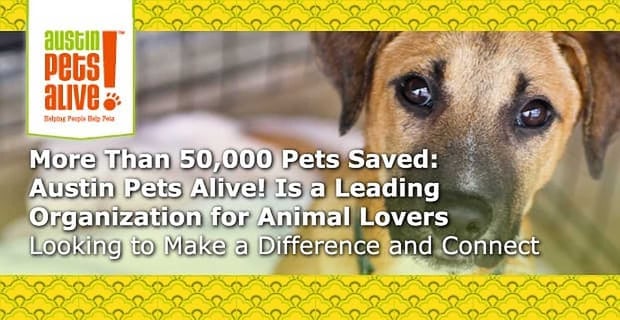 More Than 50,000 Pets Saved: Austin Pets Alive! Is a Leading Organization for Animal Lovers Looking to Make a Difference and Connect

The Short Version: Austin Pets Alive! is a pioneer in saving the lives of pets that would otherwise be euthanized in shelters. The no-kill organization located in Austin, Texas, runs programs that allow volunteers to help animals in need of a little extra love as well as spend time together. APA! hosts special events throughout the year to connect with the community and gain its support. As part of its mission, APA! experts give advice to people considering adopting or fostering an animal, so they’re prepared to care for it. The organization is also promoting its successful initiative in Austin to inspire communities throughout the nation to join the no-kill movement.

With my first serious boyfriend, I knew our relationship had moved the next level when we went to the animal shelter to look at cats. I had always loved animals, but my parents had never let me have a pet when I was growing up. My guy loved cats as well; I actually became interested in him when my friend’s cat crawled on his lap and happily accepted his gentle pets at a party.

At the shelter, we met the cat we named Lancelot — or Lance for short. He was a 7-year-old fluffy, white Himalayan and had a nasty laceration on his ear, which meant an immediate vet bill. He had just been returned to the shelter by another family who didn’t want him, and he looked desperate. So we brought him home.

Lance immediately began strutting around the apartment like he was a king — hence his name. He’d jump on me as a not-so-subtle demand for attention and offer a high-pitched, vibrational purr that would make me smile. Mischievous and handsome, he was a part of our family for the next eight years.

But Lance was almost not adopted. He had been in the shelter for three months when we saw him and was nearly euthanized. That’s why I’m so grateful for no-kill organizations that keep cats, dogs, and other animals alive while they try to find loving homes for them. In Austin, Texas, one nonprofit —  Austin Pets Alive! — is trying to provide the blueprint for no-kill shelters nationwide.

As the largest no-kill city in the nation, Austin is an excellent place for compassionate animal lovers. APA! played a significant role in the transition to no kill, and in the work the city has done saving lives since it implemented the policy in 2010. That makes APA! a favorite place for people to volunteer or even adopt a loving pet — like Lance.

“APA! has saved over 50,000 lives since the organization began in 2008. We also have one of the largest foster programs in the US with roughly 600 cats and 400 dogs,” said Hannah Horstman, Communications and Events Manager for Austin Pets Alive! “We save thousands of animals every year who, for various reasons, would have been euthanized. This includes tiny kittens not yet weaned, puppies with illnesses, cats with feline leukemia, and dogs with behavior support needs.”

What sets APA! apart is the number of programs it offers to help animals that aren’t ready for adoption or face challenges that new pet owners may not wish to take on.

“Austin Pets Alive! began due to gaps in the sheltering system,” Hannah said. “So our teams created programs that have become safety nets for the animals that end up having nowhere else to turn.”

That includes the Ringworm Adoption Center, which treats cats with ringworm and keeps the fungus in a quarantined space to reduce contamination, and there’s a Feline Leukemia Adoption Center that houses and finds homes for cats with the disease. Its Neonatal Kitten Nursery helps orphaned and unweaned kittens grow strong, healthy, and ready for a loving family.

The Neonatal Kitten Nursery at Austin Pets Alive! is the first of its kind in the nation.

“Traditional shelters didn’t have the resources to care for kittens that were too young to eat on their own, so APA! created the first-ever Neonatal Kitten Nursery,” Hannah said. “Kittens are bottle-fed and given the special and delicate care that these tiny creatures need in the first weeks and months of life. Each of our programs was created to answer a need, and with these programs, we’ve been able to help the animals who need us the most.”

APA! runs a Dog Behavioral Program that helps dogs with certain behavioral issues that are keeping them from being adopted. The organization also runs a Parvo Puppy ICUthat treats dogs with parvovirus — a contagious viral disease — as well as a medical triage program. Without these programs, many of these animals would have been euthanized.

A Fulfilling Place for Pet Lovers to Focus Their Time Together

The team at APA! is filled with people who care deeply about animals — and love spending time with each other.

“APA! is an eclectic mix of personalities and skills. From volunteers to staff, every person brings something unique to the table,” Hannah said. “Something that everyone has in common is the willingness to get creative when problem-solving and, unsurprisingly, a deep love and respect for the pets we serve.”

That atmosphere makes APA! a great option if you and your special someone are looking to give back to a cause you’re both passionate about. The organization has plenty of volunteer opportunities, including data entry, foster screening, and special one-time projects.

Don’t have pets of your own yet but want some furry fun time? APA! has some interesting options. You can be part of the dog enrichment team that fills Kong toys with peanut butter for pups or takes dogs for a walk. You can also help bathe kitties with ringworm or gently play with shy cats to help socialize them.

If you’re thinking about getting a pet, but aren’t sure you’re ready, you can always foster a pet at home. It’s so rewarding when the foster animals are adopted, said Hannah, and she shared the story of a recent foster cat that she bonded with at the office.

“We were thrilled that our sweet office cat was going into foster because she had so much love to give, and we recently learned that the cat was adopted,” she said. “Knowing that this senior, diabetic cat is going to live out her golden years as a member of a family means the world to us.”

Volunteers Organize Events That Support the Mission of APA!

Events are a fun way to get involved with APA! While many are in the Austin area (if you’re visiting, be sure to check the APA! calendar), others are held throughout the nation. Signature events include the Tailwaggers Non-Gala, Neo-Gala, and No Kill Anniversary Party, which are produced and run by APA!.

Hannah Horstman, Austin Pets Alive! Communications and Events Manager, said events are a great way to give back.

Of course, you, your mate, and friends can also organize an event in your town.

“Many of our events are hosted by a third party, meaning we’ve been given the opportunity to come on as a beneficiary, while the event host is behind the scenes giving the event life,” Hannah said.

Because of its success helping to make Austin a no-kill community, APA! is also sharing its knowledge with other communities, teaching them how to implement programs that advance the no-kill mission.

“We have just recently launched our Maddie’s Lifesaving Training Academy. This special arm of APA! allows us to teach our pioneering, first-of-their-kind programs to shelters outside of Austin so that we can all work towards the no-kill goal together,” Hannah said. “Austin is the largest no-kill city in the nation with a 99% save rate, and we are excited about the chance to help other communities join us.”

APA! can help you take the next step in your relationship, just like my first serious boyfriend and I did with Lancelot. The organization is also a go-to resource for couples who have decided to adopt a dog or a cat. Experts at the organization say it’s important that everyone in the household be onboard with fostering or adopting.

Matchmakers at APA! help you consider your household and lifestyle choices (like whether you enjoy dog-friendly outdoor activities that would be perfect for a pet or if your job keeps you too busy to devote time to an active animal) before you commit to adopting. They can help you find the right pet for your home, and, sometimes, it may be best to start with a foster animal.

“Fostering is a great way to help save an animal and help you identify what kind of pet will — or won’t — be a good permanent fit for your family,” Hannah said. “You’ll have the rewarding experience of guiding an animal through life until he or she finds a forever home. You and your family get to be an animal’s bridge from the shelter to the rest of their lives.”