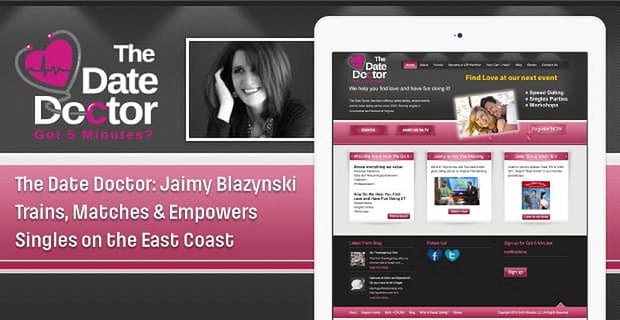 The Short Version: Jaimy Blazynski calls herself The Date Doctor because she aims to diagnose problematic dating issues and heal the broken-hearted. The professional dating coach, based in Virginia, lends an empathetic ear to singles and trains them to correct their bad dating habits. Since 2005, she has helped hundreds of clients get over their hangups and into loving relationships. Additionally, Jaimy hosts frequent singles events and arranges blind dates to empower East Coast singles to put themselves out there. You can find her down-to-earth advice on her podcast shows, blog posts, and in her book “CRUSH: Lessons Learned From a Lifetime of Crushes,” which explores how self-worth impacts dating success. Whether you’re in need of a dating profile tune-up or a straight-to-the-point matchmaking service, The Date Doctor is ready to support you on your journey to love.

When Jaimy Blazynski would come home from preschool, her parents’ favorite question to ask was “Who do you have a crush on?” They probably thought it was adorable to hear their 4-year-old talk about the little boys in her class, but the question sent an unhealthy message to the impressionable young girl.

“What they were telling me is that relationships are the most important part of your life,” she said. “I grew up thinking I should marry the first guy who asks and make sacrifices to make it work.”

After enduring years of heartache, Jaimy Blazynski found her happily ever after and became The Date Doctor to help daters in the US.

As it turns out, making it work wasn’t as easy as she had imagined. Jaimy ended up in a dysfunctional marriage in her early 20s, with a baby son to take care of and no idea how to make her life easier. Fortunately, her husband wasn’t the making-it-work sort, and he left her after a few rocky years.

At the time, her broken marriage seemed like a tragedy, but Jaimy told us it was actually a blessing in disguise. It gave her a reason to work on herself so, when she met the right man, she would feel worthy of him. Within six months, she found a kind and supportive love interest on Match. He was her 13th blind date, and, for her, that was the lucky number. They got married and have been together for over 16 years now.

“I still get goosebumps. I’m still in love with him,” she told us. “I can’t believe I get to feel this happy.”

In 2005, Jaimy decided she wanted to help singles dealing with insecurities to make a similar transformation in their love lives. She started a part-time business, but her husband soon convinced her to quit her job and go into dating coaching full time. So she became The Date Doctor, an accessible and candid guide for single men and women.

Jaimy’s dating coaching is the centerpiece of her business. During one-on-one sessions, she tells singles what they’re doing wrong in the dating scene — and what they can do to improve. This is the part of her job she loves the most, she said, because she can see the impact her advice has on people’s lives.

She has helped people of all backgrounds, beliefs, and ages. Whether you’re 25 or 65, Jaimy’s coaching can forever change your approach to romance. As long as you’re willing to do the work, she’s more than willing to work with you. The dating coach said her most successful clients take ownership of their mistakes and want to take action to stop negative dating patterns.

“My clients are ready to make the changes they need to make,” she said. “I’m not there to listen to you vent about all the jerks you meet. I’m there to talk about what you can do differently.”

Jaimy offers a host of personalized dating services for single men and women.

Many clients come to Jaimy through her Facebook group, Fans of The Date Doctor, which has nearly 3,000 members. Members often post questions, share experiences, and provide feedback in the safe and monitored support group. By drawing from her own experiences with singledom, The Date Doctor offers concrete prescriptions, including online profile makeovers, to get people’s love lives on track.

In her first book, “Crush: Lessons Learned From a Lifetime of Crushes,” Jaimy elaborates further on her dating philosophy and explains how living through a series of heartbreaks showed her the importance of prioritizing her own needs and wants in a relationship. Once she felt love and respect for herself, she found a partner who loves and respects her, too.

“It’s so much more than how you look, what you say, or where you go,” she told us. “It’s about what you believe you deserve and how you train your partners to treat you.”

In addition to her coaching, her book, and her Facebook group, Jaimy conducts engaging singles events in Connecticut, and Virginia. These parties and speed dating events offer a face-to-face alternative to online dating. Jaimy often themes her events to the time of year and said she’s excitedly planning a Before the Ball Drops Bash on New Year’s Eve to give singles the chance to find someone special before the year is up.

The Date Doctor also matches clients up on Three Blind Dates for a fraction of the cost of a traditional matchmaker. Simply tell her your dealbreakers, and she’ll set about connecting you to love interests who meet your standards. This service provides singles with a quick way to put themselves out there and get a professional’s assistance in the dating arena.

Twice a month, Jaimy and her husband podcast together to answer listener questions about love and relationships. They call it Date ‘Em or Ditch ‘Em. In 30-minute shows, the husband-wife duo take a lighthearted approach to topics like dating dealbreakers, crazy exes, and judgy in-laws. “I bring the dating advice,” she said, “and he injects the humor.” You can subscribe to the podcast on iOS, Android, by email, or on Stitcher.

Jaimy also writes a blog to share her dating experiences and offer words of wisdom to singles facing similar challenges and opportunities. The dating expert covers a variety of light and serious topics, from what to say in an initial message to a crush (don’t overthink it) to why she doesn’t mind not getting roses on Valentine’s Day (it’s more important to show love all year round).

“All I want any of you to know is that you are not alone,” she wrote in a blog post about her experience spending Thanksgiving as a single mom. “Every stage in our life is temporary. If you are alone or sad this year, I can assure you it will pass.”

A reader named Deborah said she cried while reading this article. “My holidays have changed terribly,” she wrote in the comments section. “Thank you for your kind thoughts and words.”

Success Stories From Clients Who Are Happily Married

Throughout our talk, Jaimy was bursting with stories about the clients she’s helped — from the single father she matched on a date for Thanksgiving to the single woman she coached through a breakup. The Date Doctor takes a lot of pride in her success stories. She lit up when talking about the couples who met at one of her singles events and have since moved in together or gotten married.

Gina and Gerson met at a singles event organized by the Date Doctor.

One single man named Gerson attended over 50 of Jaimy’s events and voiced his frustration with the dating scene on more than one occasion. “I had to talk him off the ledge every time,” she said. “But then he met Gina at an event, and they were a perfect match.” Months later, Jaimy got a midnight text saying that Gerson had proposed, and Gina had said yes!

Jaimy guides people to change their dating mindsets because that will change their dating patterns and, ultimately, get them the results they want. Her approach is eye-opening for many singles who hadn’t realized how much they were standing in their own way.

“If I was never introduced to her, I would never have met this great guy,” said a client in a testimonial, “or learned this much about myself and what I want in a partner.”

In her bio, Jaimy promises she won’t quit until she has matched up all her coaching clients and event attendees in happy, healthy relationships. She wants everyone to feel the joy she now shares with her second husband.

“It’s really wonderful when you get people who have been perpetually single to the other side and you see them in pictures with their families,” she said. “It’s just amazing to me! What job could be better than that?”

For better or worse, Jaimy made finding a relationship her top priority from an early age. She thought at the time that commitment meant sacrifice and settled for an unhappy marriage because she didn’t understand what a loving partnership looked like.

The Date Doctor’s tell-it-like-it-is attitude motivates singles to improve themselves.

Once Jaimy realized her own worth, everything changed for her. She divorced Mr. Wrong and found her Mr. Right. Today, she works hard to come to the aid of singles. The professional dating coach hosts speed dating events, podcasts alongside her husband, and talks singles through their love challenges.

“I love my coaching sessions,” she said. “I love working with people who don’t know how to get there and seeing that transformation when they learn what’s going wrong and can move forward.”