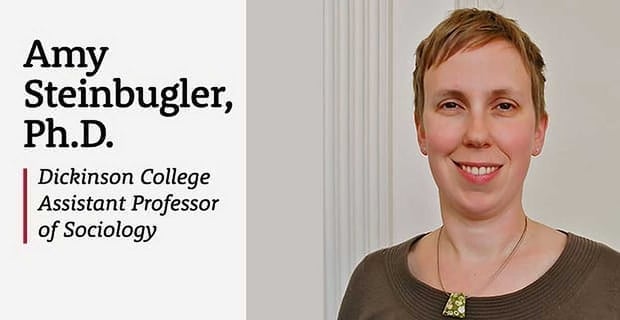 In the 15 years Dr. Amy Steinbugler has been studying sociology, she’s never taken the easy road, and the same holds true for her 2012 book Beyond Loving: Intimate Racework in Lesbian, Gay and Straight Interracial Relationships.”

As a sociology professor at Dickinson College, the topic of inequality has long been an interest of Steinbugler’s.

“I’ve always been drawn to issues that make me feel something, whether that’s anger or shock or confusion. This has led me to study forms of inequality,” she said. “I want to get to the bottom of these issues to try to understand what’s going on.”

Her latest passion lies in examining how people create and maintain relationships across inequalities.

“I kept encountering this idea that people in interracial relationships had somehow gotten beyond race … that in this private, intimate sphere, you could escape the ugliness and the difficulties of racism,” she said. “There seemed something fundamentally mistaken about this assumption, so I wanted to explore that question more closely.”

Steinbugler was kind enough to discuss the details of her innovative book with me, and here’s what she had to say.

“Beyond Loving” does more than just hypothesize about how couples work through racial differences and how sexuality plays a role in it all.

Doing what few do, Steinbugler takes an empirical approach, interviewing 80 partners from 40 interracial couples, half being heterosexual and half being homosexual, to get the data firsthand.

“I wanted to look at what it means to be interracial and how the experiences of lesbians and gays might differ from straight couples,” she said.

Using these interviews, Steinbugler shows that interracial couples are not racial mavericks and that they are far from “beyond race.” Race seeps into their relationships in plenty of ways — from deflecting strangers’ stares to deciding where to live to figuring out how to talk candidly about race with each other.

She uses the concept  of racework to explore the everyday actions and strategies people use to anticipate and deal with these experiences.

“I don’t think we currently have a good sense of how race works within intimate relationships. This might come from an idealized notion that love dissolves social differences or renders them trivial,” she said. “But we wouldn’t assume that gender differences disappear because two people love each other. We know that people in straight relationships sometimes argue about who does the dishes, cleans up after the kids or pays the bills. Love doesn’t make gender irrelevant. And it doesn’t make race irrelevant either.”

What you should know

Steinbugler hopes books like “Beyond Loving” will encourage people to reconsider what they think they know about race and relationships.

Perhaps race will always influence our relationships, and maybe we don’t live in a post-racial society, especially with what’s been going on in Ferguson, like we thought?

“The notion of a post-racial society is a difficult illusion to maintain but many try. We have this sense that the U.S. is becoming a more multiracial, a more tolerant society, and you do see that interracial couples are becoming more and more prevalent,” she said. “But acknowledging that our most private and intimate relationships are deeply affected by broader inequalities forces us to reckon with the pervasive nature of racial stratification.”

And while Steinbugler feels grateful to have won two awards (the 2014 Distinguished Book Award from the Sexualities Section and the 2014 William J. Goode Book Award from the Family Section of the American Sociological Association), she’s most honored that “Beyond Loving” has resonated with people and challenged popular opinion.

“While the book focuses on interracial relationships between African-Americans and whites, I hope that people interested in other types of interracial relationships will also find these ideas to be useful,” she said. “Social science research has a lot to tell us about love and romance, but only if we’re willing to let go of the idea that who and how we love can be separated from the problems and patterns of the society in which we live.”

“Beyond Loving: Intimate Racework in Lesbian, Gay and Straight Interracial Relationships” is available on Amazon, and to read more of Dr. Amy Steinbugler’s work, visit dickinson.edu.

“My Relationship is Boring” — 12 Ways to Fix It