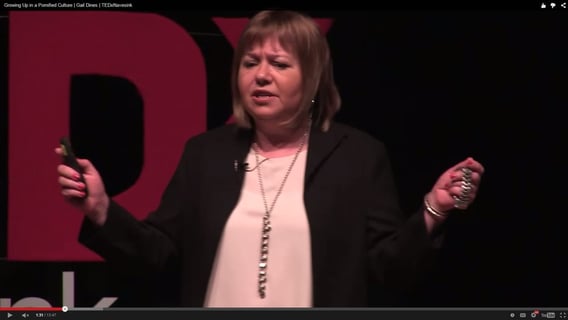 Dr. Gail Dines’ “Growing Up in a Pornified Culture”

Teens are bombarded with images and articles that cause them to hypersexualize themselves, making them ready for a pornography shoot even if they never set foot on one, according to Dr. Gail Dines.

Dines went into further detail in her recent TED Talk.

The usual standard for a female is a white, blonde woman, who has no “jiggles” aside from her breasts. Women of color get in occasionally, provided they have an incredible body aesthetic.

As girls grow up in this culture, two primary choices are presented to them: “f**kability versus invisibility.” It’s unrealistic to expect anything but the former when teens crave attention and being wanted — even more so when her friends have already made that choice themselves.

“It is impossible to ask her to go for invisibility,” Dines said.

It essentially forces a young girl to sexualize herself in a way she doesn’t plan or think of on her own.

Dines talked with an inmate who was incarcerated for raping his 12-year-old stepdaughter. She explained how he used the culture to groom his target, emphasizing that qualities like hotness and sexiness are her most important traits. By the time he actually went for his stepdaughter, she had bonded with him over those traits.

The boy, probably not expecting such a graphic scene, reads the video description, which tells him this is how “real men” act, how “real men” treat their sexual partners. Because he’s alone when he finds this video, he doesn’t have someone telling him real sex isn’t like that, that the disgust he might feel is justified. He merely accepts it.

“If my son is better than this, then I believe your son is, too,” she said.

“This is the sex education today across the world,” she said, referring to the fact that the Internet is how teens now learn what is normal.

Educators, mental professionals, community leaders, parent groups, lawyers, youth workers, therapists and activists will all be involved in the process.