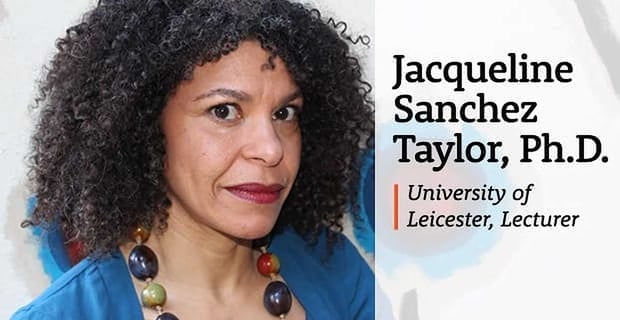 TL;DR: When you want to learn more about sex tourism, particularly the contradictions that exist among men and women, there’s no better person to turn to than Dr. Jacqueline Sanchez Taylor, a lecturer at the University of Leicester.

If you see an older man with a younger woman at a tourist resort, do you assume there is an arrangement where money is exchanged for sex? Probably.

However, if you see an older woman with a younger man at a tourist resort, do you assume there is an arrangement where money is exchanged for sex?

Or do you assume the man “got lucky” or is taking advantage of the woman?

“People still have this idea that the women in these situations are victims,” Dr. Jacqueline Sanchez Taylor said. “Well why aren’t women allowed to be instrumental about sex and say that’s what they want and go out to find these relationships to fulfill a desire that they have?”

These are just some of the double-standards Taylor, an esteemed lecturer at the University of Leicester, hopes to eliminate with her study “Female Sex Tourism: A Contradiction in Terms?”

Taylor’s groundbreaking work started a decade ago, when she interviewed 300 male tourists who went to exotic destinations like South Africa, India and Costa Rica looking for sexual relationships.

Through these telling interviews, she found men were traveling to these tourists spots to have sex with local women and a majority of these relationships involved an economic element, whether that was the men giving their sexual partners money or helping with errands and bills.

However, although the men would acknowledge that their “girlfriends” were often sex workers, they didn’t always want to interpret their encounters as a form of prostitution.

Instead, they said they were forming meaningful relationships with these women, ones that weren’t exploiting them in the same way that sex workers would be exploited in the U.S. or U.K. — that they were “helping out” local women.

“They could use the tourist backdrop as a way of saying this is a holiday romance,” Taylor said. “It was quite easy to talk to men about what was going on and what was happening. Some of them would say, ‘Well I know it’s about prostitution, but I’m different from the other guys and I know why I’m doing it.”

Taylor’s next question was: do women do this?

That answer is yes.

Taylor used a similar questionnaire with 200 female tourists, but this time she focused on women who traveled to Jamaica and the Dominican Republic.

She found 100 percent of the women said they did not engage in a relationship with a male sex worker, but 33 percent acknowledged that they monetarily helped the men they were in a sexual relationship with.

“Even though they said they didn’t pay for sex, they had helped out and provided gifts,” she said. “But they didn’t count this as a form of prostitution and they never saw their boyfriends as a sex worker. With the guys, they sort of acknowledged that.”

Similar to the men, women would describe these situations as that of forming a meaningful relationship during a vacation.

“They were calling these encounters holiday romances rather than prostitution contracts or something like that,” she said. “They felt empowered in the same way that the male sex tourists did to swap and change partners — to be in control of the relationships and to do that in a way that maybe they couldn’t with their boyfriends back home. They had financial and economic power to dictate where they were going to go, who they were going to see, what they were going to do.”

While she’s not saying people can’t fall in love while on holiday, Taylor does want to shed light on these types of relationships so people can be more informed, especially in terms of how location, gender, sexuality and race play a role.

“These places are seen as places where people can cross sexual taboos — to behave sexually in ways that many of them would never dream of doing back home. I want women to be aware that this is a form of prostitution. For many of the local men, it’s a survival strategy in the same way it is for female sex workers,” she said. “It can be very dangerous for some tourist women if they don’t acknowledge that this is really a form of prostitution. For example, you’re less likely to use condoms if you think it’s real love or a real relationship.”

She’s also interested in conducting follow-up research by returning to the tourist destinations from her previous studies to see if there have been shifts in the way people think about prostitution.