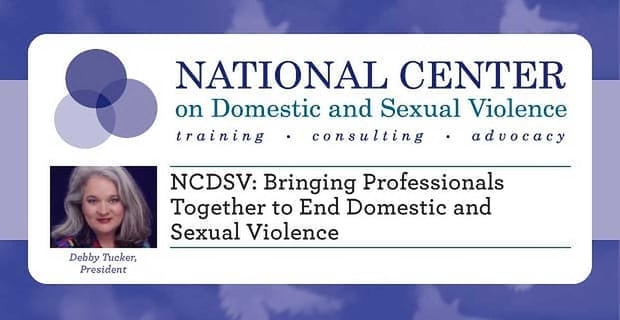 NCDSV: Bringing Professionals Together to End Domestic and Sexual Violence

The 411: The National Center on Domestic and Sexual Violence is a leader in stopping these terrible crimes by training and consulting with law enforcement, educators, media, policymakers and more to provide support for victims and effective intervention for perpetrators, as well as working cooperatively with others to prevent the use of violence.

Domestic and sexual violence are serious problems at local, state, national and international levels, and no one profession can put an end to it. There’s strength in numbers, and that’s exactly what the National Center on Domestic and Sexual Violence (NCDSV) knows.

Bringing together individuals and organizations from all 50 states and the U.S. territories who work with victims and perpetrators, such as health care professionals, social workers, faith community leaders and more, NCDSV is transforming society and saving lives.

Founded in 1998, NCDSV, originally called the National Training Center on Domestic and Sexual Violence, consists of a group of leaders who develop initiatives and provide quality training, consulting and other resources to help agencies end domestic and sexual violence.

“We all came together out of a desire to move public policy and provide good quality consultation and training that would help more rapidly advance the movement,” said Debby Tucker, NCDSV’s President.

Changing the world so you can help change the world

The NCDSV works closely with anyone who might come into contact with victims of domestic violence, from detectives to community members like pest control specialists, teaching them to improve their skills in responding to victims, help offenders learn what true respect is, lay groundwork for better sexual assault prevention strategies and more.

“There’s not anybody, any profession you could think of, that we wouldn’t have reason to have a connection to,” Tucker said.

The National Center on Domestic and Sexual Violence encourages and creates unprecedented levels of collaboration among professionals working to end violence.

The best part about these training sessions and consultations is NCDSV has taken an overwhelming and difficult issue and breaks it down for people in a variety of communities so they can bring about change themselves in everyday life.

“I think that one of the things that we have emphasized always is partnership and developing partnerships with people that grow stronger over time and allow for us to design together the kind of change that we want to see in the world to bring about an end to violence,” she said.

Making a big difference in many different ways

NCDSV has made a significant impact over the past 16 years, Tucker said the team will continue to build on what they’ve already learned while also exploring more ways to prevent violence from ever even happening, especially relaying the importance of that to future generations.

“How do we instill in younger people an awareness that is deep enough that they recognize that this is a choice, that it is something that they can set aside and choose to never engage in, that as a society we no longer accept the idea that somebody ‘lost control’, whether that’s sexual or physical violence?” Tucker said.

Tucker has been involved in leadership in the movement for more than 40 years and, in addition to the NCDSV, has co-founded other strong contributing organizations, including serving as the founding chair to the National Network to End Domestic Violence. In that role, she coordinated the input from groups working at the local, state and national levels during the writing of the groundbreaking Violence Against Women Act (VAWA), passed by then-Senator Joe Biden in 1994.

VAWA also included an amendment by Senator Ted Kennedy that Tucker helped to write to provide funding for a National Domestic Violence Hotline she opened in 1996 as a project of the Texas Council on Family Violence.

Pictured below is the founding board of the National Network to End Domestic Violence.

The founding board members of the National Network to End Domestic Violence.

What will always remain is NCDSV’s optimism and the admirable way they make it easy for people from all walks of life to make a difference.

“This is very complex stuff — I put it right up there with rocket science — figuring out why people do what they do, how they learn to do it, how they will unlearn doing it, how we will help the next generation to never choose to adopt this way of being,” she said. “All of that is complicated stuff, and it takes a whole lot of different perspectives to bring it about. We are proud to do our part and to work with so many others dedicated to ending violence. Who knows how profoundly it would change our world if we could end interpersonal and sexual violence?”

NCDSV’s President Deborah Tucker with Vice President Joe Biden and Dr. Jill Biden at a celebration of the Violence Against Women Act’s passage at their home outside Washington, D.C.

To learn more about the National Center on Domestic and Sexual Violence, visit www.ncdsv.org.