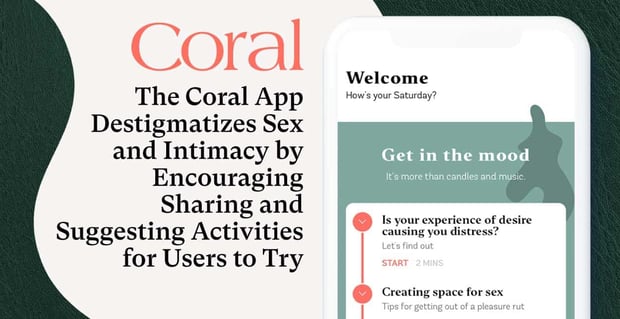 The Short Version: Through her own experiences and research, Isharna Walsh realized that many people weren’t satisfied in their sex lives, but because of the stigma surrounding sexuality, they often didn’t know how to improve them. That’s why she created Coral, an app that helps users explore their sexuality and improve their intimacy. Coral allows users to talk about their experiences and offers information from experts in various sexual health fields while encouraging users to learn about what turns them on and providing exercises to help increase their desire.

When she was 26, Isharna Walsh realized that she didn’t understand what she wanted from sex and intimacy. Though she was in a long-term relationship, the sex she was having wasn’t satisfying, and she didn’t know how to change it.

“I didn’t know how to create a healthy intimate life, and I also didn’t know what was normal,” Isharna told us.

Instead of living with a lukewarm sex life, Isharna set out to discover how to change her experience. Over the next five years, she found that she wasn’t alone when it came to having those problems.

“I discovered the extent of the issues people were facing. I had no idea what they were experiencing until I explored the space myself,” she said.

Armed with that knowledge, she founded Coral, an app designed to help users enhance their sexual lives through science, stories, and practical exercises created by experts.

Isharna Walsh founded Coral to inspire others to talk about their sexual lives.

Isharna wanted to find ways to improve the more intimate parts of people’s lives. She focused on methods that would allow users to build stronger connections with their desires and understand what would make them sexually fulfilled.

“I founded Coral with the idea that sex and intimacy are a fundamental part of our health and happiness,” Isharna said.

The app has three primary goals. First, it aims to get people out of their tired routines in the bedroom. Second, it encourages them to get in touch with their sexuality by understanding what’s going on with their bodies.

And, finally, it offers users ways for users to increase their desire by suggesting relevant activities and articles.

Helping People Understand Themselves and Their Desires

When users create a Coral account, they first answer a few questions that will help the app customize their experience. For instance, a gay man in a relationship would receive different advice than would a single heterosexual woman.

Coral offers a variety of insights because it attracts a diverse range of users. While many of its users are female, it also attracts a significant number of men. Many users are in their 20s and 30s, though the app also serves plenty of users over 70. The majority of app users are in relationships, but singles may find Coral’s materials informative, as well.

The Coral platform attracts a wide range of users.

The app — available on iOS, Android, or the web — has even attracted users that Isharna wouldn’t have expected. For instance, she interviewed a couple from Savannah, Georgia, that used Coral to strengthen their connection and experiment sexually. Though they’d been together for decades, they still recognized that they could be creative in the bedroom.

She also spoke to a 19-year-old genderqueer user who told her that the app helped them increase their sexual confidence.

“They all have a growth mindset. They’re motivated to better themselves and explore the potential in their lives,” Isharna told us.

Coral encourages users to think about improving their sexual health in the way they would about other types of self-improvement, including physical and mental health.

Teaching Couples to Try Out New Things in the Bedroom

Isharna put together a team of sex and intimacy experts to create the content and activities on Coral. Some of the team members are researchers, while others have clinical experience as sex therapists.

The team is also diverse in terms of age and experience. Isharna was born in Sri Lanka and raised in Australia, and her co-founder is Belgian. Other team members are from the United States. Those different backgrounds allow Coral to cater to as many perspectives as possible.
“We represent quite a broad base. And everyone on the team is motivated and believes in our mission,” Isharna said.

This team has created what it calls the three pillars. The first is to normalize sexual talk by developing community stories and discussion boards where users can share their experiences. For example, a user named Katherine shared a story about her low sex drive, a circumstance that resonated with other users.

The Coral app delves into intimacy and sexual experiences.

“When you start having more open conversations with people around sexuality, you realize so many other people are experiencing the same thing. You can learn from other people’s experiences and perhaps try something they have tried,” Isharna said.

The second pillar helps users develop a better understanding of their own bodies and how they work. That can help them experience intimacy differently.

“When you experience a sensation or change, that’s the most powerful part,” said Isharna.

The last pillar is play, which encourages couples to connect differently than they may have before. Some of these activities include meditation that connects them to desire or a tutorial on intimate acts.

Coral doesn’t try to push users past their limits or make them behave in a certain way in the bedroom. On the contrary, users control what they want to learn.

“We ask you a series of questions that figure out what you’re trying to experience,” Isharna said.

One of the biggest reasons that Coral has attracted such a broad audience so quickly is that sex and intimacy discussions are stigmatized around the world. Many people — but especially women and girls — feel considerable shame surrounding their sexuality.

To help normalize sexuality, the Coral team wants to teach people about how their bodies work. Because if they come to recognize that their desires aren’t so different from those of other people, they’re less likely to feel abnormal.

While on her journey, Isharna said she believes that learning how her body and mind worked was the key to unpacking the stigma she felt.

“We want to help people understand the biology, physiology, and psychology around intimacy and sex. As a population, we have a low level of knowledge about these things,” she said.

“To broaden that imagination and feel normalized in your desires, Coral can be a healthy and positive resource,” she said.

Though Coral has only been available for a short time, the risk that Isharna took in quitting her job to develop the app has certainly paid off. Already, the team has seen its users getting plenty of value from the app.

“You put something out into the world, and you’re not sure how it will impact people’s lives. Seeing the product you’re working on change lives is an incredible feeling,” she said.