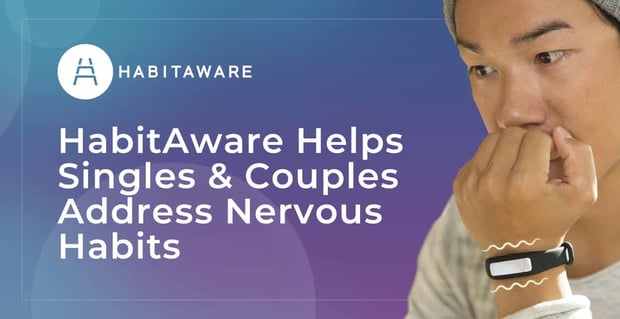 The Short Version: Mental health conditions can often manifest themselves in hair pulling, skin picking, nail biting, and face touching. Those repetitive physical behaviors may also result in deep feelings of shame that can impact self-confidence and, of course, relationships. HabitAware integrates wearable technology with an app on a user’s smartphone to interrupt those harmful, unconscious patterns. The tool allows individuals to become more mindful and retrain their brains to overcome disorders by alerting them when they make a specific motion.

Years ago, Aneela Idnani developed a repetitive behavior that she thought would distract her from challenging and stressful situations. She would pull out her hair.

The disorder, also known as trichotillomania, would have her mindlessly using her fingernails to pluck out her eyebrow hairs and eyelashes. The next day, she’d look in the mirror with shame and dig into her makeup bag for a pencil to draw her eyebrows back on. She became masterful at doing whatever was needed to cover up the damage she did when she was nervous.

It caused a lot of shame, and it came to a head one day when her husband caught her on the way to the bathroom without any makeup.

“He bumped into me and said, ‘Where are your eyebrows?’ That was the first time I shared what it was and got it out in the open,” she told us. “Even for him, he was astonished that he never noticed, but I had 20-plus years of experience hiding it.”

Not long after, they were relaxing in front of the television, and he caught her hand as she was unknowingly pulling at her hair again. It was uncomfortable for her. She felt like she was being told what to do, and she started to fight it. But it also made her realize that she needed to address the behavior to deepen her relationship.

That’s when she got the idea for HabitAware, a company that produces wearable technology to learn a user’s repetitive behaviors and give them a gentle reminder when they’re doing it.

She started to research her condition, which 1 in 20 Americans have — even though many live in such shame that they’d never admit it. She wanted to develop a technology that lets people know when they are engaging in a behavior, so a partner or spouse doesn’t have to.

Aneela and her husband started understanding the process and meeting with people in the Minneapolis tech community, where they lived.

With time and research, they turned a simple self-help idea into a business that helps individuals have a better relationship with themselves and others.

HabitAware allows users to quickly start retraining their brains to replace destructive behaviors with more effective coping skills. It involves a bracelet that looks a lot like a fitness tracker.

The wearable Keen smart bracelet can learn behaviors quickly. When users first set it up, they wear it as they perform a specific action for 30 seconds. Its technology records the angle of their wrist and their hand’s motion patterns so that it can identify when they pull hair, pick skin, or bite nails.

Then, as they wear the device, anytime it recognizes a nervous behavior, it gently vibrates. Aneela calls this a “hug,” designed to interrupt patterns by making users aware of their hands.

With time, they’ll be able to retrain their brain to significantly reduce behaviors that are a go-to stress release by replacing the hair pulling, skin picking or nail biting with healthier strategies.

The wearable device is also connected to an app, which is available on both iOS and Android. It uses Bluetooth technology so they can track when they exhibit behaviors and better understand daily patterns.

“It’s a patented gesture detection process,” Aneela said. “It’s recording a calculation of the motion, the angle, the speed, and the position of the wrist movement. When it senses a match, then you get a vibration. It’s a self-care alarm or your body’s way of telling you that you need a moment of me, and something is not right.”

Both Men and Women Have These Nervous Conditions

When researching these mental health conditions, Aneela discovered that both men and women are affected almost equally. However, society’s expectations and judgment of women’s bodies make it more prominent.

For example, men with stubby, bitten nails are barely noticeable. If a man pulls his hair, he can shave his head or beard, and no one may notice.

“For women, hair, nails, and skin are how our culture sees our worth. When you’re hair pulling or nail biting, you automatically feel lesser than,” she said. “You can give yourself depression if you have these conditions because you’re constantly being compared to other peers — and comparing yourself.”

The Keen bracelet alerts wearers when they perform a specific action.

Part of the plan with HabitAware is not only to help the individual with a tool to support a healthy relationship with their bodies but also to normalize a condition that is so widespread.

Aneela said she’s been wearing her Keen bracelet for two years, and now she is aware of whenever her hands are playing with her eyebrows and eyelashes. Because it’s a chronic condition, she doesn’t expect to ever rid herself of the behavior entirely.

“If you’re not doing the work to manage the condition, a big event will bring it back,” she said. “Our goal is to bring awareness to it so you can do the work to figure out the right strategies for you. It’s a practice. The more you do it, the better you get at it.”

To that end, the people who use HabitAware are also encouraged to join its community to receive the support they need to gain self-confidence and be better partners in their relationships.

HabitAware Helps Users With Their Connections to Others

Aneela said she used to spend a lot of time doing her makeup and hiding the results of her trichotillomania, and she’s not the only one. One of the people who benefited from HabitAware calculated that she’d spent about a year of her life pulling her hair and dealing with the aftermath.

“These behaviors may seem innocuous and harmless, but the mental anguish that they create paralyzes people from becoming who they are truly meant to be,” she said. “If you don’t have a good mindset of who you are, you end up dating the wrong people. If you can get people to a place of confidence, strength, and self-love, they can invite that into their lives and create a beautiful life for themselves and their families.”

Another user, Marley, said it was hard for her partner, Chris, because there wasn’t much they could do to help her and support her in the relationship. HabitAware not only created a healthy way to help, but it’s also benefited their relationship.

“Since I’ve gotten my Keen, they can remind me to wear it, which stops me from pulling out my hair,” Marley wrote. “It’s given them a way to be involved physically, and goodness, it’s been so helpful on the days when I need a reminder for that act of self-love.”

The many positive reviews motivate Aneela and her team to continue improving their products and services. The company has even received a research grant from the National Institute of Mental Health, which helps them make both the wearable device and the app more useful.

“It’s so nice to know we are helping a community that has largely been ignored by the medical profession,” she said. “And we’re able to lift them up.”