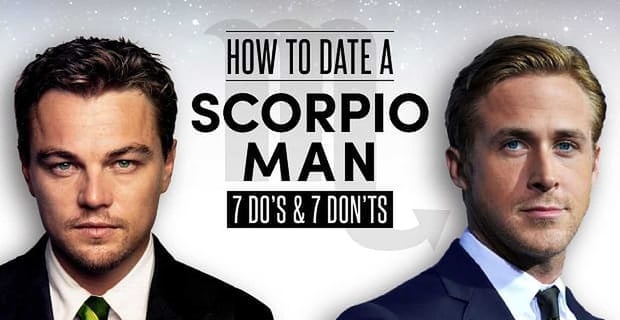 Scorpios are known for being mysterious, sexy, and feisty, but beyond that, they can be hard to figure out, especially when it comes to dating. Born between Oct. 23 and Nov. 21, some famous Scorpio men include Leonardo DiCaprio, Ryan Gosling, and Matthew McConaughey.

(Tip: If you’re a Libra, Leo, or Gemini, you might want to try another sign. Our expert-approved dating sites can help with that.)

While your odds of dating one of those men are pretty slim (sorry, ladies), we do have 14 tips if you want to date a Scorpio man who’s a little more attainable.

7 Don’ts of Dating a Scorpio Man

1. Don’t Push Him for Information

While mystery is part of their charm, Scorpios can be frustratingly secretive sometimes, which means you shouldn’t force him to open up right away.

You’re not Diane Sawyer and he’s not Caitlyn Jenner, so stop with all the questions. Let him open up to you in his own time.

2. Don’t Rush Him Into a Relationship

Just like Scorpio men don’t like being forced to share personal information too soon, they also don’t like being rushed into anything, especially if it wasn’t their idea. Whether it’s a romantic relationship or Sunday brunch, if you can tell he’s taking a step back, give him some space and he’ll appreciate you all the more.

If you think flirting with the cute bartender in front of your crush will get him to fall for you, you’d be wrong. One of the worst things you could do is make a Scorpio jealous. Loyalty is huge for them, and that intensity and passion isn’t a good thing when it turns to jealousy.

A Scorpio man can be very protective of the people he cares about and can have a Hulk-like temper.

We all know lying is a terrible thing to do in general, but it’s really not good to lie to a Scorpio partner. They are as loyal and faithful as they come, but get caught in a lie, and you’ll definitely feel their wrath. If you hurt a Scorpio man, he’s unlikely to forgive or forget.

Most men like to feel special, but this is especially the case when it comes to Scorpio men. Give him extra attention every now and then, particularly when you’re in a group.

If you want to make a Scorpio guy fall for you, compliment him when he does something funny or sweet, even if it is something as simple as giving you the last french fry. Those small moments help build an emotional connection.

6. Don’t Criticize Him, Even In a Joking Way

While most people can take a joke, Scorpios don’t take too kindly to being picked on, even if it’s “all in good fun.” If you’re going to make fun of the way he cuts his sandwiches or whatever, say it once and be done with it. If you keep going, be pretty prepared for him to turn into Cranky Pants McGee.

7. Don’t Try to Win Every Fight

Scorpios are brutally honest and rarely stray from their strong opinions, which means it’s going to be hard for you to win a fight.

This doesn’t mean you can’t ever disagree with him, but sometimes you just have to let his emotion trump logic.

7 Do’s of Dating a Scorpio Man

Now for the part you’ve been waiting for — the 7 do’s for dating a Scorpio guy!

Scorpios like being in control, so let him have the upper hand and plan the dates at the beginning. Don’t worry, though. Scorpios are very focused individuals, so you won’t be sitting around like “Where do you want to go to eat? I don’t know. Where do you want to go? I don’t know. I don’t feel like cooking, I’m allergic to fish, and we’ve been to Olive Garden 3 times now.” You get the idea.

Scorpio men often like to take the lead when dating women.

Scorpios like to be in control, so let him take the lead in the beginning. It’ll be a good thing for your love compatibility if you don’t mind following his lead.

2. Do Be Patient With Him

Remember when I said it’s going to be hard for you to win a fight with a Scorpio man? This is where patience is very important. While extremely private, Scorpios also have a lot of emotions, so when a mood swing strikes, just keep this tip in mind.

3. Do Watch What You Do, Even the Little Things

While Eric Matthews may have been the detective we always wanted, not to mention the most good-looking one, he’s got nothing on Scorpios. Intuitive and observational, your new love interest will notice every little thing you do and make a mental note of it, so if you’re used to biting your nails when you’re lying, he’s going to know.

Even though Scorpio men don’t like sharing personal things about themselves until they really know the person, they love knowing everything about everyone else. He’ll want to have a deep conversation and learn as much as he can about yourself, even if he doesn’t reciprocate. Don’t let this get you down because it will pay off!

You’ve probably heard this before, but Scorpio men are usually pretty amazing in bed. While this may make you smile like you just heard they’re turning “Magic Mike” into a trilogy, don’t rush into sex. The awesomeness of it will only cloud your judgment before you really know where this thing is going. And if you’re the type to get attached after sex, sleeping with him too soon will make things worse.

Rushing into sex can cloud the emotional connection you feel with a partner.

Don’t rush into having sex with the Scorpio man. That feeling of intimacy and attraction can cloud your judgment on the romantic relationship.

6. Do Let Him Express His Dark Side

Scorpios can get a little cynical sometimes, so hear him out when he’s complaining about Starbucks running out pumpkin spice lattes or the struggles of being a Miami Dolphins fan. Give him a safe space to express his passion, and he’ll appreciate the chance to vent.

According to AstrologyCompanion.com, your astrological sign can tell you if you’re a good match with a Scorpio. These are the 3 best and worst matches for Scorpios. Not a compatible match? Don’t worry! There can always be an exception to the rule.

Even if you take all of these astrology tips into consideration, dating a Scorpio man ultimately comes down to taking a chance and seeing where the cards fall. Good luck!

3 Tips If You’re Dating a Guy with Little Money

3 Ways to Handle a Suffocating Boyfriend

10 Effects of Depression on Relationships (Plus 5 Ways to Deal)

11 Bad Relationship Habits (Plus How to Break Them)