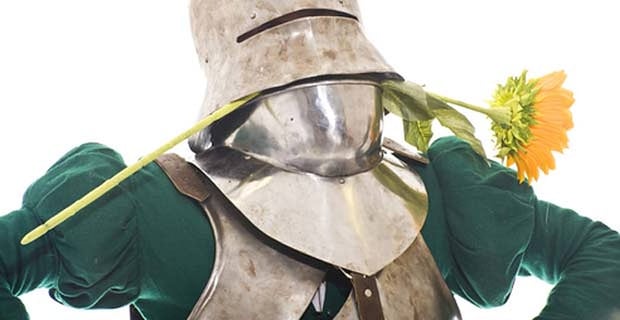 I was recently struck by a comment made by a seemingly nice guy during a random encounter we shared at a local store. The guy went out of his way to hold the door open for me and waited patiently for me to pass through it. When I did, I said jokingly, “Well, I guess chivalry isn’t dead!” His reply? “Nope, it’s not dead — just real tired, ma’am.”

I laughed because I thought it was a witty response, but it wasn’t until later I realized just how profound his statement was. Seriously, how many women, me included, have sighed and proclaimed chivalry is dead while at lunch with a girlfriend? “He was such a jerk,” we say of Steve, our most recent dating faux pas. “Where have all the nice guys gone?” we whine over wine.

Ironically, as we continue to search for our proverbial knight in shining armor, many of us have become jaded in matters of the heart. In the process of looking for what we envision as the perfect guy, we have completely lost sight of what chivalry is and what a real knight looks like.

Chivalry is defined as “the sum ideal qualifications of a knight, including courtesy, generosity, and valor.” This idea was developed in the 12th century. Basically, it encouraged honorable behavior between knights and proposed a system of courting ladies to gain their hearts.

In short, chivalry is a code of conduct written for dating, designed by royalty, and it is a model we modern women are wise to follow. This is where the concept of a knight in shining armor began!

Many of us have become convinced courtesy and good manners are reason for alarm. Think about it. When a man does something nice for you, do you become suspicious of his motives?

The last time you were on the receiving end of a sincere act of chivalry, did you minimize it as some conniving plot to get in your pants? Have you ever completely ignored some random act of kindness because the guy didn’t dress the way you wished he would?

When the man at the store suggested chivalry was tired, I felt real compassion for the guy and for chivalry itself. He was relatively plain in appearance, shy, and unsure of himself — qualities that can sometimes scream “Eww!” to the ladies. Nonetheless, I walked away thinking he was probably a great guy with a lot to offer a woman, a guy who has opened thousands of doors hoping one, just one, would take notice of him.

The saying “Nice guys finish last” rings true when you think of all the good guys out there who really want to find a woman to be nice to, only to be told they are too nice. How frustrating! Women have battled Bad Boy Syndrome so long that we no longer recognize a good man when we see one.

Ladies, men worth going gaga over will have certain mannerisms and practices that may at first seem strange, considering all the jerks you’ve been with. For instance, he will be kind, gentle, and self-assured, without being arrogant or crude. He will be polite and generous, and he will make you feel safe. Chivalrous men do what they say they are going to do, like

Chivalrous men do what they say they are going to do, like call when they say they will. Chivalrous men will want to open doors for you, introduce you to their friends and family, and show you off. They will be interested in getting to know you and will respect your boundaries. A chivalrous man is a keeper!

I will be the first to admit I am actually quite cynical when it comes to relationships, but I do not believe chivalry is dead. I believe women should expect chivalry from every potential suitor and never settle for less than the best. But I also think women should show the same courtesies to men.

So, the next time a guy opens a door for you, take a second look. Your knight just might show up in the strangest of places in desperate need of nothing more than a good shine.

40 Dates Your Man Will Love