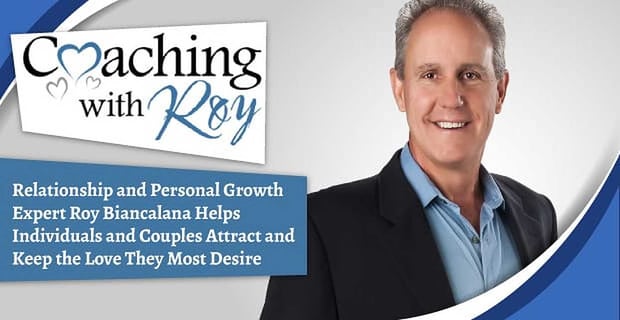 The Short Version: Relationship and Personal Growth Expert Roy Biancalana is passionate about helping singles attract lasting love. As someone who has gone through his own ups and downs on the quest for a forever partner, he knew he could draw from his personal and professional experiences to guide others on their relationship journeys. Today, Roy is a best-selling author and nationally recognized relationship coach, and he has taught thousands of singles how to find the love they deserve through his publications, ecourses, and coaching programs.

Roy Biancalana had been married for 19 years in what he describes as a “platonic, functioning, co-parenting kind of relationship.” The union ended in a series of unfortunate events, and he found himself rebounding into a relationship that was built on chemistry and sex.

“That lasted about two and a half years, and she dumped me six months before we got married,” he said. “That broke my heart and sent me spinning. The first thing I did in response to that was join a bunch of dating sites to try and find someone to help me forget the last one, which is actually hilarious how much it didn’t work.”

When a friend suggested to Roy that he talk to someone, he decided to give it a try. In 2005, he hired a coach and worked with her for a few years — discovering core issues that were leading to his personal drama and pain. After putting in the work, he ended up meeting someone, falling in love, and getting married.

At the same time, Roy’s life as a professional golfer was winding down (he played on the PGA Tour for years). He decided on a career change and CoachingWithRoy.com was born.

“I became a coach because the whole process was enlightening to me,” he said. “It was fascinating and transformative in my life. I wanted to do for other people what my coach did for me. I wanted to help people who felt stuck, were in pain, or couldn’t make a relationship work. I wanted to take them on a journey of self-discovery.”

Roy has helped thousands of struggling singles attract lasting love. The author of two books (one of which is a top seller on Amazon), Roy offers ecourses, one-on-one and co-ed group coaching programs, as well as an assortment of educational and inspirational online resources.

Breaking Free of the 7 Barriers That Keep You Single

With more than a decade of experience as a conscious relationship, dating, and personal growth expert, Roy realized he could help more people if he expanded the way he delivered his message. In the past few years, he’s published two books focused on helping individuals and couples who are committed to experiencing the love life they most desire.

The first book, “Relationship Addiction: A Memoir,” is a portal to enlightened and blissful intimate relationships that will awaken you to the root cause of your relationship dramas and disappointments while taking you on a deeply spiritual, yet practical, step-by-step path to success.

“I was a relationship addict,” Roy told us of the book’s personal subject matter. “I was looking for a woman and her attention and affection to make me feel like a man and complete me. The book is about the ‘you complete me’ mindset — not only describing it but also describing how to get out of it and break free of that mindset.”

Roy’s books give readers a practical approach to attracting a life partner.

Roy’s second book, “Attracting Lasting Love: Breaking Free of the 7 Barriers that Keep You Single,” reached number one on Amazon and explores the seven barriers that keep a person single. It was also inspired by a quote from an Ancient mystic poet named Rumi, which Roy paraphrased for us, “Your task is not to search for love, but rather seek and find the barriers you’ve built against it.”

“There are seven major things that people are doing that are ruining their love lives, attracting the wrong relationships, or creating negative patterns,” he said. “The premise of the book is if you quit sabotaging yourself and love is the very nature of the moment, it will flow through you freely in whatever pace the universe has for you because you’re not obstructing yourself.”

A Storehouse of Insightful Resources on Relationship Building

Aside from Roy’s books, which have helped thousands around the world, the relationship coach offers a storehouse of insightful resources on his site, CoachingWithRoy.com, including ecourses for singles and couples and blog posts.

“The courses are pretty in-depth,” he said of his professional ecourses that include topics such as “The Radiant Woman,” “The Superior Man” and “The Silver Lining Blueprint.” “My clients love them because, when you’re working with me, you can do some of those activities in the background, which creates a lot of good discussion topics.”

In Roy’s ecourse “Finding Love Online: From Horror Stories to Love Stories,” he explores the ups and downs of online dating, including how to use it as a tool for finding your ideal match and avoid the potentially negative aspects of meeting a mate online.

Roy’s blog is a free resource that offers great insight into self-awareness and finding a partner. He writes about a slew of topics such as “Compatibility: What’s Important and What’s Not,” “What You Can Learn from a Narcissist,” and “5 Signs That You’re Destined to Be a Coach.”

“It’s about how willing they are to work on themselves,” Roy said of individuals who turn to his resources for help. “It’s about their desire for personal awakening and self-understanding. Without that quality, there’s no chance that we’ll have any success.”

When Roy started his coaching practice, he admitted he had the knowledge and the passion but wasn’t quite sure how to execute making it into a business. Fast-forward a decade and he has helped thousands attract and keep the love they desire most.

“When I work with a client, we are entering into a relationship together for a significant period of time where their life is going to be, hopefully, turned upside down,” he said. “I don’t do single sessions because I do deeper work with people. Just like you can’t go to the gym and get in shape in one workout, you’re not going to be able to change from the inside out and understand your relationship dynamics in one session.”

A relationship with Roy can last up to eight months, and he said his typical client demographic ranges in age from early 20s to mid-70s with around two-thirds being women between 35 and 65 who have been through divorce or a significant breakup. His clients have described him as sensible, compassionate, honest and relatable.

“I’m about helping my clients become self-aware as to their blind spots and how their baggage is affecting them,” he said. “I work on the inside of single people’s lives to help them discover what they’re doing or feeling — you know, what’s going on inside of them that’s sabotaging their efforts to create a lasting relationship.”

It’s no secret that Roy’s approach to self-growth and finding lasting love works. CoachingWithRoy.com is brimming with testimonials from past clients who have found success.

“Roy has a natural, authentic ease to his coaching style that allowed me to feel safe and open up immediately,” said one client named Sydney. “He tuned into me and asked thoughtful, penetrating questions that allowed me to recognize and release a lot of negative energy I was carrying toward a former partner.”

Another client named Michael agreed. For him, Roy has acted as a co-pilot guiding him on his journey toward love.

“His wisdom and guidance have played a direct role in my ability to meet my wife, Shivonne,” Michael said. “Without Roy, I would not have the beautiful family that I have now. I find his passion for growing and waking up to be extremely contagious. When I spend time with Roy, I feel as if I am moving forward with large strides.”

For Roy, hearing words of praise is the reason why he does the work that he does.

“It’s extremely satisfying to support people in asking the right questions and seeing them attract what they want,” he said.