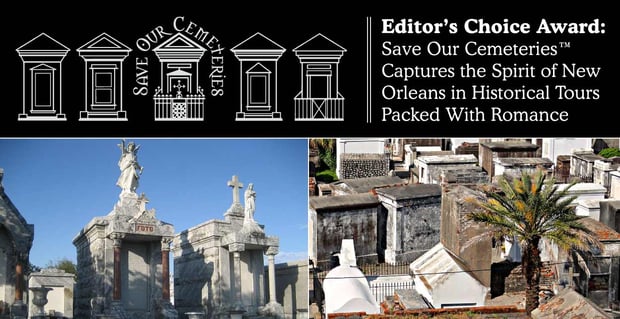 Editor’s Choice Award: Save Our Cemeteries™ Captures the Spirit of New Orleans in Historical Tours Packed With Romance

The Short Version: New Orleans has a romantic allure as a travel destination because of its spicy Cajun cuisine, jazzy music scene, and spooky historical sites. Since 1974, Save Our Cemeteries has endeavored to protect the legends and stories that have made New Orleans famous. This nonprofit foundation restores local cemeteries and hosts expert tours to raise money for its cleanup projects. Thanks to Save Our Cemeteries, couples can enjoy a walking tour of a historically significant cemetery, learn about its occupants, and see NOLA in a new light.

Mary Louise Christovich (1928-2017) was an author and historian with a deep appreciation for New Orleans. She prided herself on being a 12th-generation New Orleanian whose family left France and settled in the region in 1706.

Throughout her life, Mary Lou advocated for preserving the city’s history, heritage, and traditions. In 1974, she co-founded a nonprofit called Save Our Cemeteries in an effort to save St. Louis Cemetery No. 2 in Tremé from decay and destruction.

Not only did Mary Lou and her cohorts restore this historical landmark, but their preservationist work has continued into the 21st century and now encompasses 40 cemeteries in New Orleans.

Mary Lou was active on the board of the Save Our Cemeteries foundation for about 43 years, and she spearheaded many philanthropic efforts to keep the history of New Orleans alive in the hearts of its residents and visitors.

Today, Save Our Cemeteries acts as a bridge from the past to the present. The organization protects the cities of the dead with ongoing restoration projects, and it funds those efforts by hosting walking tours to several well-known grave sites, including the future resting place of actor Nicolas Cage.

Save Our Cemeteries is a celebrated nonprofit run by preservationists, historians, and volunteers who carry on Mary Lou’s legacy and protect the cemeteries of New Orleans. If you’re looking for a unique date activity in the Big Easy, book a tour, and you can learn about the ambitions, triumphs, scandals, and romances that have shaped the city we know today.

New Orleans is a vibrant, bustling, and rowdy place to visit. Over 17 million people visit New Orleans each year and spend almost $9 billion in dining, shows, art, souvenirs, and other local entertainment.

Many tourists enjoy the lively atmosphere and sultry music on Bourbon Street and beyond, but an active nightlife isn’t all the city has to offer. Couples can also escape the crowded and craziness by seeking out a New Orleans cemetery. Such historical sites can offer peace and quiet in a city known for its wild parties.

Save Our Cemeteries offer walking tours that can help people slow down, forget their everyday cares, and gain an appreciation for the colorful history of New Orleans.

Every week, Save Our Cemeteries takes guests on an adventure by recounting the lives of pirates, statesmen, artists, and musicians throughout history. The walking tours offer more than mere ghost stories — the knowledgeable guides can impart factually accurate narratives and introduce people to a vast neighborhood of ancient tombs and vaults.

The team works hard to restore dilapidated tombs to their former glory.

The St. Louis Cemetery No. 1 tour is the most popular among tourists. A $25 ticket includes a visit to the tomb of the Queen of Voodoo Marie Laveau as well as that of chess prodigy Paul Morphy. The tour will also stop by the pyramid tomb built by Nicholas Cage and relate its bizarre backstory and cultural significance.

You can find a story around every corner in a cemetery, and the Save Our Cemeteries experts know the strangest, funniest, and most jaw-dropping stories about noteworthy people buried in New Orleans.

The typical Save Our Cemeteries walking tour starts around 10 a.m. and ends before lunchtime; however, the nonprofit sometimes gives people a thrill by scheduling tours during the evening or at night. These spooky tours are great for adult couples looking for a New Orleans date activity that doesn’t involve Bourbon Street or burlesque shows.

Thanks to its popular walking tours, Save Our Cemeteries has raised awareness about historically significant tombs and long-neglected cemeteries, and it has brought laughter and knowledge to countless curious visitors.

Many history buffs, sightseers, and families have praised Save Our Cemeteries for its educational and preservationist work in New Orleans. Over 8,500 people follow Save Our Cemeteries on Facebook, and dozens of them have left five-star reviews about the walking tours and volunteer events.

Save Our Cemeteries organizes walking tours of the most famous NOLA cemeteries.

“We had a small group, which was perfect,” said Jennifer R. in a review. “I love that this is a nonprofit committed to history rather than exploiting the supernatural elements of the cemetery. Plenty of spooky details, but contextualized within the history of New Orleans.”

“It was a great intro to our exploration for our first time in New Orleans,” said Colleen C. in a Yelp review. “Really helped us to get a feel for the dynamic culture and colorful history.”

Tour attendees often say they prefer Save Our Cemeteries tours because it represents an all-around good cause. Not only do visitors learn a lot about history, but they also support the preservation of New Orleans cemeteries by funding the nonprofit’s cleanup and restoration projects.

“Knowing that at least some of the money would go to restoring the cemetery made me feel better about choosing a Save Our Cemeteries tour,” said Don K. “It’s a place to remind us of the fragility of life and the strength of families.”

Save Our Cemeteries: Making History Come Alive Since 1974

Mary Lou’s passion for New Orleans history, architecture, and cemeteries has inspired a wave of restoration throughout the city. Today, many preservationists continue the work she started as part of Save Our Cemeteries, and couples can support those efforts by booking a walking tour to some of the most famous cemeteries in New Orleans.

“Mary Lou was one of the most elegant ladies I ever met,” said professor emeritus Kenneth Holditch. “What she did for New Orleans can never be measured.”

Save Our Cemeteries began as a passion project in the 1970s, and it has evolved into a beloved cultural ambassador that honors the past, informs the present, and safeguards New Orleans for the future.