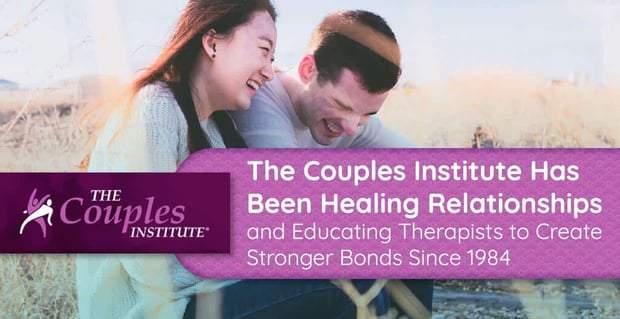 The Short Version: Married therapists Dr. Pete Pearson and Dr. Ellyn Bader wanted to find a way to work together every day, so they decided to lean on their expertise and focus on couples counseling by founding The Couples Institute in 1984. Pete and Ellyn have not only worked with thousands of clients over the decades, but they also expanded the practice to train other counselors around the world. Now, The Couples Institute employs 15 therapists with their own specializations and has a global impact on relationships.

In the early 1980s, when The Couples Institute of Menlo Park, California, was getting started, few people knew about the therapy method used to treat relationship distress — let alone how effective it was. But today, couples therapy is a common method for healing or solidifying relationships.

“At that time, almost nobody specialized in couples therapy,” said Dr. Pete Pearson who co-founded the practice with his wife, Dr. Ellyn Bader.

Despite its uniqueness at the time, The Couples Institute quickly became popular, as many people had relationship issues that required some outside help.

“We could see couples in broken marriages that were in so much pain, and we wanted to break that chain of unhappiness — and even bad parenting,” Pete told us.

According to Pete, the most common issue that affects couples is a breakdown in communication. That’s why The Couples Institute helps them balance their lives and needs in a way that makes them both feel heard.

Couples frequently visit the institute searching for the secret to better communication, which they often find. The trouble typically comes up in the application of those strategies.

“They come in asking for the formula for good communication,” Pete said. “Teaching skills is the easiest thing in the world; it’s the fear and sustained effort about applying those skill sets that’s the problem.”

Over the decades, couples therapy has become more prevalent in California and throughout the United States, and Pete and Ellyn are glad to have helped kick-start the trend. Together, they’ve helped thousands of couples make the best decisions for themselves and their relationships.

Pete and Ellyn have even taken their dedication to couples therapy a step further by expanding their practice to train couples therapists around the world. That includes teaching counselors best practices and how to come up with effective strategies that will help more couples communicate effectively.

Dr. Pete Pearson and Dr. Ellyn Bader: Partners in Therapy and in Life

In the mid-1980s, Pete and Ellyn knew they wanted to open a business together. At first, they considered starting a restaurant, but, because of their psychology backgrounds and relationship with each other, it seemed more natural to start a therapy practice helping couples create strong partnerships.

“We thought we could just specialize in working with couples,” Pete said.

And over the years, the couple has taken on many more projects as married colleagues.

They have written books together, including the popular “In Quest of the Mythical Mate” penned in the 1980s. The book provides an overview of their unique therapy model.

Couples therapists interested in the workshop — called “The Developmental Model of Couples Therapy: Integrating Attachment, Differentiation, and Neuroscience in Couples Therapy” — enroll in a 12-month training program that Ellyn conducts solely online and through telephone calls.

“This type of therapy is the most complicated because the change often relies on the least motivated person or any given problem in a relationship,” Pete said.

“We will teach people how to be partners both at work and at home,” said Pete.

Though the couple could have been running a restaurant for the past 30 years, their projects as therapists have advanced the field of couples therapy both in the United States and abroad.

The Couples Institute attracts a range of clients from different fields. Because the practice is in Silicon Valley, Pete said that it attracts the “usual suspects,” including engineers, techies, real estate agents, and attorneys.

Though clients may come from a wide range of backgrounds, many of them end up discussing similar issues. For example, while couples need to talk to one another honestly, they also need to share their concerns compassionately.

“If you don’t have compassion towards your partner, that honesty can be too brutal,” Pete said.

The Couples Institute offers educational resources for a variety of counseling purposes.

As a way to always have a center for that compassion, Pete advises couples to record their wedding vows so they can revisit them later.

“The first time you have a whopper of a fight, review your wedding vows,” he said. “That’s a good way to get through whatever you’re fighting about. Your wedding vows are a great marital compass.”

Though Pete and Ellyn have developed a model they use in their practices, the 14 therapists who work at The Couples Institute can practice any method with which they feel comfortable. Each therapist specializes in a different area, including one therapist who conducts premarital workshops for couples.

Clients can choose from individual sessions, couples therapy, or workshops. After requesting an appointment, clients receive a therapist recommendation from The Couples Institute staff.

Even a couple as connected as Pete and Ellyn have distinct offerings they bring to the table.

“I’m more willing to deliver a dose of tough love to couples than Ellyn,” Pete said. “She’s more patient than I am, but I’m more direct.”

The Couples Institute Trains Therapists Around the World

As part of their legacy, Pete and Ellyn have created a robust couples therapy practice and training programs that promote their tried-and-true measures. The training programs also help therapists deal with their biggest challenge: personal development.

“What goes on within the therapist that makes therapy difficult for them?” Pete said. “ If they don’t get comfortable in their own skin dealing with couples’ issues, they’re not going to be successful. We care for the personal development of the therapist.”

Most importantly, Pete and Ellyn provide couples with the tools that they’ve developed over decades to determine the underlying issues in their relationships.

Pete and Ellyn also speak at events and hold break-out sessions. Over the summer, for example, they’ll hold a workshop titled “The Art of Transformation in Couples Therapy” in Santa Cruz County, California.

Through their practice, books, speaking engagements, and training programs, Pete and Ellyn have made their mark on the field of couples therapy.