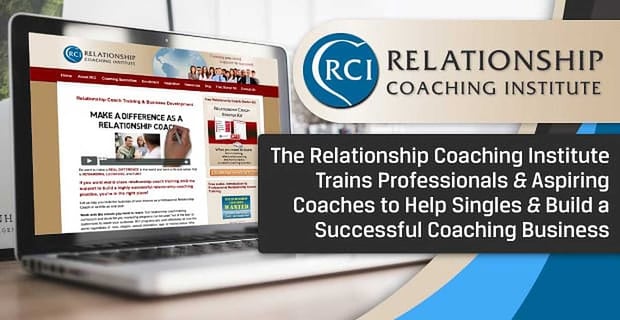 Whenever I turn on my TV, I see dozens of weight-loss commercials promising a shortcut to a healthy diet. Just take this pill, drink his shake, buy this equipment, and you’ll be on your way. Some self-proclaimed experts say they’ve unlocked the secret to slim living, but David Steele, Founder of the Relationship Coaching Institute, believes those secrets are all bunk. He doesn’t think people need a buff TV personality telling them how to lose unwanted pounds.

“Weight loss is simple,” David said. “Everyone knows how to do it — you eat less, and you exercise more — but it’s really hard to do because it involves changing your habits.”

The Relationship Coaching Institute supports professionals who have a passion for helping people find love and happiness.

David, who is a professional relationship coach and licensed marriage and family therapist, said the same general principles apply to the process of finding love. Singles often know what to do; they just have tremendous challenges doing it. For example, many over 40 singles resist using online dating for fear-based reasons, yet it would be a helpful tool for them.

Singles don’t need dating advice about where to meet people or what to say — they need a support system to help them overcome their fears, take risks, and break self-sabotaging habits. He pioneered the idea of a relationship coach for singles to give commitment-oriented people a resource to help them accomplish their relationship goals.

David founded the Relationship Coaching Institute in 1997 to promote sound relationship support from a coaching perspective that combines his work as a professional coach and marriage and family therapist. This long-standing organization trains anyone who wants to become a professional coach on the basics of building a business, marketing, and running ethical workshops and coaching programs that make a difference in people’s lives.

At the RCI, sincere and committed individuals learn the tricks of the trade and educate themselves on what they can reasonably promise and do for people struggling with dating and relationships. This revolutionary approach to relationship coaching empowers individuals to accomplish their long-term goals through conscious effort, not quick fixes.

“In the coaching world, we focus on what people want, not their problems,” David said. “You know you did a good job as a coach when a client gets solid results and comes away feeling good about themselves.”

In 1997, a Licensed Therapist Started a Mission to Teach & Inspire

In 1978, David Steele became a marriage and family therapist because he wanted to help couples foster loving relationships and raise healthy families. As a child of divorce, he felt strongly about the importance of parents keeping their love alive and their relationships strong. “I hated my past,” he said, “and I wanted to create a better future. I made it my mission to lower the divorce rate.”

However, he soon ran into a disappointing reality: Couples only came to a therapist when they were broken beyond repair. Often it was a last-ditch effort to say they tried everything before breaking up. He told us many of the couples he saw didn’t really want solutions — they wanted permission to end the relationship.

David searched for another avenue to reach people and make a difference in their love lives before it was too late, and, in 1995, he stumbled upon the emerging field of professional coaching. “There’s something about coaching I’m really drawn to,” he said. “I see it as the next evolution of therapy, and the next hope for couples and families.”

Although he liked the concept of relationship coaching and influencing singles before they committed to the wrong person, he saw some issues with the business model that allowed anyone to call themselves a coach and give advice that may or may not lead to long-term success. Coaches didn’t need a degree. They didn’t need to prove their claims. And that made David wary.

In 1997, he decided to bring a higher standard to the relationship coaching industry by creating a blueprint for how coaches should attract clients, run workshops, and help people responsibly and effectively. He founded the Relationship Coaching Institute to train aspiring or experienced coaches to work with singles and couples on matters of the heart. To date, the RCI has trained over 5,000 relationship coaches around the world.

David has run the RCI alongside his wife, Darlene, for many years, but now that their children are grown, they’re ready to pass the torch and move on to the next chapter of their lives. Fortunately for them, some highly competent graduates of David’s programs have joined the Mentors & Trainers Leadership team, which trains the trainers at the RCI. He sees these experienced relationship coaches as the future of the organization.

“Now that I’m over 60, I’m grooming the next generation of leaders here at RCI,” David told us. “I’m not doing the trainings myself anymore. We still support the institute, but we no longer want to run it day-to-day.”

The Relationship Coaching Institute specializes in training coaches on successful relationship and business strategies. Most training sessions take place online because folks come from all over the world to enroll and learn from the best in the industry. Over the years, RCI has developed a compelling message and effective modules that clarify what professionals can do to empower their clients in the dating world. David and his team of mentors train coaches to accompany and support clients through the five stages of relationships: readiness, attraction, pre-commitment, commitment, and bliss.

From readying a single person to date with confidence to helping committed couples thrive, RCI’s training programs cover all aspects of relationships and outline what it takes to make love last year after year. David has spent years studying romantic relationships to design strategic, pragmatic, and useful coaching methods that make sense for modern daters.

David has also endeavored to get the word out by publishing several self-help books geared toward relationship-minded individuals. He published “Conscious Dating” in 2005 to outline his proven coaching models and dating tenets. “My superpower,” he said, ” is distilling something complex into understandable, actionable terms.”

Whether you’re seeking a career change or want to hone your motivational skills as a therapist, minister, or other professional helper, RCI can bolster your knowledge about relationships and show you how you can encourage someone to improve his or her love life.

“I have felt so welcomed and taken care of since I joined RCI,” said Tieu Nguyen in a testimonial. “This is the best personal development investment I’ve ever made.”

“I want to train people who have a passion for making a difference in the world,” David said. “I want to make it easy for them to get clients and make a good living doing what they’re passionate about.”

Radical Dating & Radical Marriage: Going Beyond Happily Ever After

Dating is a goal-oriented process. Singles often seek a finite result, and some don’t put much thought toward what happens after they’ve gotten the girl or guy and walked into the sunset together. That’s usually when the movie ends and the audience applauds, so it’s easy to forget that happily ever after isn’t an endpoint — it’s just the first act of a long-term relationship.

David told us he seeks to go beyond that happily-ever-after moment and teach couples what comes after bliss. In his view, relationships require ongoing and conscious effort, and he wants to address those issues to help couples stay together after the honeymoon phase is over.

In 2014, he and his wife co-wrote “Radical Marriage: Your Relationship as Your Greatest Adventure” to discuss how marriage has evolved and what to do once you achieve an advanced partnership where both individuals are committed to one another for the long haul. David firmly believes couples need to keep moving forward and growing together if they are to successfully build a happy and stable family. It sounds simple, but it’s hard to achieve without knowing how.

In his books and lectures, David proposes Radical Dating as the way to seek a highly functional and fulfilling marriage. “The purpose of radical dating is to find someone so highly compatible you can build a Radical Marriage with them,” he explained. “Couples can only go as far as their partner choice and ability to build a successful relationship will allow them to go.”

In 2017, David partnered with Besty Chasse of “What the Bleep Do We Know” to produce a 10-episode docu-series on YouTube. The series, called “Radical Dating,” shows five single individuals over 40 working with RCI graduates on camera and building their relationship skills based on David’s radical dating principles. The unscripted journey highlights how a single person’s focus and self-awareness can positively impact their dating results.

David describes himself as an anti-guru because he doesn’t believe there’s a secret sauce to finding love, and he’s skeptical of anyone claiming they can work miracles on people’s love lives (or waistlines). Some so-called dating experts believe they have all the answers and can guarantee their clients will get in a relationship, and that, in David’s mind, is pure folly. Yet many people buy into it because they want to believe it’s possible.

In the coaching industry, sometimes it pays to overpromise. Too many self-styled gurus sell people on future romance and overnight weight-loss, but David seeks to combat the deceptive techniques of some consultants by creating a high standard for positive, proven, and practical coaching methods.

“Joining the RCI was the best decision I have ever made for improving my business because it’s also improving my life.” — Brian King, a licensed clinical social worker

Since 1997, the Relationship Coaching Institute has given thousands of coaches the tools to create an ethical business that can truly help singles and couples build loving relationships. While this international organization has grown substantially over the last two decades, David has never wavered from his mission to lower the divorce rate by teaching and spreading the word about enduring relationship skills.

“I promise just facts, no ego,” he said. “Gurus believe they have all the answers, but good coaches know it’s not about them — it’s about their clients. Good coaches just want to be of service.”

Please note that Radical Dating®, Radical Marriage®, and Conscious Dating® are registered trademarks and permission to use is restricted to licensed members of Relationship Coaching Institute.