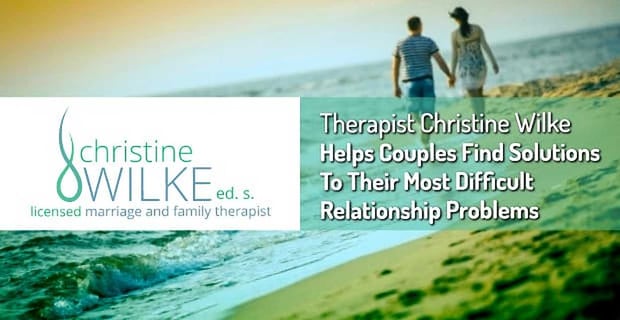 The Short Version: Couples who fight frequently — over both big and little things — may need help identifying some of the underlying issues. In Easton, Pennsylvania, many couples turn to licensed Marriage and Family Therapist Christine Wilke to learn the communication skills they need to stop fighting and start strengthening their relationships. Christine helps couples work through everyday problems that can result in unhealthy habits and behaviors if left unaddressed. She has also produced a convenient online workshop that relies on Imago relationship therapy principles to help couples.

Therapist Christine Wilke, Ed.S., learned about a particular method for marriage counseling in a very personal way: Years ago, she and her husband were having a rough patch.

It was early in their relationship when they were both young professionals focused on their careers and with a growing family. As a result, they struggled to balance the soccer practices and other family responsibilities with being a good partner to each other. Life was becoming stressful.

Christine Wilke, Ed.S., helps couples solve some of the common problems they experience.

“My husband and I went on one of those couples’ retreats, and we learned about the Imago method of therapy,” she said. “I had been working with couples for many years, but that experience gave me the tools to enhance what I do with couples.”

Christine was so impressed with how well it worked for her and her husband that she became a Certified Imago Relationship Therapist to help couples at her private practice in Easton, Pennsylvania.

Imago relationship therapy principles were developed by psychotherapist Harville Hendrix in the 1980s, and are founded on theory that childhood traumas often manifest themselves into your current relationship with your partner.

“We pick a partner that resembles the familiar love that we’re used to growing up — for good or for bad,” Christine said. “So, in marriage, when you learn to react in a healthy way, you can actually heal those old wounds from childhood because, often, you project a lot of those wounds onto your spouse without even knowing it.”

Couples can learn new communication skills to unearth the underlying issues in a disagreement.

Christine focuses on creating new communication skills that cut down on the defensiveness and misunderstandings.

“It’s less about agreeing and more about taking turns to understand each other. You give each other the gift of listening instead of just talking over one another,” Christine said. “The premise is simply that you are two different people coming from two different perspectives. It’s not deciding who is right and wrong, but embracing each perspective equally.”

Christine said that she learned so much from her training that she felt she couldn’t use it all in the hour-long sessions with clients. So, she created an online workshop series for couples to watch together with methods to practice throughout the week as a supplement to the in-office visits.

The workshop, called “Marriage Repair Workshop,” also supports another tenet of her training: the commitment of each person in the relationship to work through — and overcome — recurrent problems.

Couples are often relieved to hear that many of the problems facing their relationships — including infidelity, anxiety, or family-work balance struggles — are quite common. But according to Christine, the bonds between the two people who got married or are planning to are usually much stronger than those challenges.

“I’m very solution-oriented. I like to focus on what’s going right and build on that instead of talking about the problems,” she said. “I like to help them express what they need so that they can be heard.”

Christine has also cultivated an online community for couples who want even more support. Members of the Love Your Marriage Facebook group are looking to overcome their own marriage challenges while also helping others.

Couples who have real problems know that, sometimes, it takes more than just improving their communication. That is why Christine teaches her clients the “power of the three P’s.”

“The first is perspective — and I think life is 99% about perspective. If you focus on the flaws in the marriage, that’s all you’ll see,” Christine said. “When you have a lot of problems, they can cover up that good stuff. But when you’re looking for the good stuff instead of what’s wrong, that changes the whole dynamic of the relationship.”

Couples can work on the Three P’s — perspective, personal responsibility, and practice — at home.

The second P stands for personal responsibility. Christine encourages each person to focus on ways they can improve rather than what the other person is doing wrong. “Instead of Gandhi’s phrase, ‘Be the change you wish to see in the world,’ it’s being the change you want to see in your relationship,” Christine said.

The third P is for practice — which is vital to enacting lasting changes.

“They need to go home and practice what we learn in the sessions because it’s all about creating healthy habits in your relationship,” Christine said.

Helping Couples Strengthen Their Relationships at Any Stage

Christine works with a wide range of clients including engaged couples, married couples with kids, soon-to-be empty-nesters, and even seniors. With infidelity such a common issue, Christine said she plans to attend a conference by Michele Weiner Davis, an internationally renowned author and therapist, to learn more methods to help couples keep their passion alive.

She also receives feedback from couples who have scheduled in-office sessions, invested in her workshop, or read her articles on The Huffington Post. Most tell her how valuable the therapy sessions are.

“I don’t take credit. I have a lot of good things to share, but it’s the couples who I admire so much,” Christine said. “lt’s a lot of work. You have to look at yourselves and make the changes. Sometimes, the smallest tweaks can make the biggest difference. It takes courage to do what they’re doing. I love to see the changes. It’s rewarding for me.”