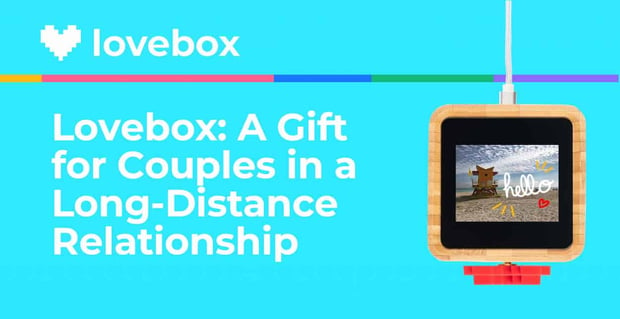 The Short Version: Lovebox is a fun messaging device that has brought joy, laughter, and heart emojis to people around the world. Couples in long-distance relationships can use Lovebox to keep in touch and enjoy having their own special way of communication. The Lovebox heart spins to notify your loved a message from you has arrived, and a person can spin the heart in the opposite direction to send you a shower of hearts to the Lovebox app. It’s a great way to show affection and grow closer to someone in another city, state, or country.

In 2015, Jean Gregoire had the opportunity to leave his home in France and study robotics at MIT. The downside was he would be thousands of miles away from his fiancée.

Before he left, Jean went to a makerspace to create something that could help him bridge the physical distance and show his love in a unique way. He created the first Lovebox as a tech-inspired love letter to his partner.

Lovebox is a simple and sweet invention that allows a person to use a smart device to send a text or image to the box. The Lovebox’s heart spins when it receives a message. The person then opens the lid to read the text inside. The box owner can respond by spinning the heart to send a shower of heart icons to their loved one’s phone.

Lovebox can act as a wingman or a love totem for couples in long-distance relationships.

Jean’s fiancée loved the gift, and their Lovebox became a symbol of their continued devotion to one another — no matter where they are in the world.

Inspired by his love story, Jean decided to help other long-distance couples strengthen their romantic connections by expanding the technology. Over the next year, Jean consulted with designers, raised startup money, and beta tested prototypes to make Lovebox available to consumers. By the end of 2016, Jean and his team had produced over 500 Loveboxes.

Today, the startup company has delivered over 80,000 Loveboxes in France, Europe, and the U.S. These boxes contain all sorts of loving messages and images for people who are living or working apart and won’t let the distance come between them.

“Everybody here on the team has one goal: to create happiness for the end user,” Jean said in an interview. “We really want to build a bridge between technology and happiness.”

A Special Way to Stay in Touch with Loved Ones

Lovebox has come a long way in just five years. The first Lovebox could only convey black-and-white text, and its spinning heart was about as loud as a washing machine. Nowadays, Loveboxes have a Color & Photo version that can show vividly colored pictures and emojis. And the spinning heart doesn’t make a sound.

The first Lovebox was designed as a romantic gift, but it can also touch the hearts of mothers, fathers, grandparents, friends, and other loved ones.

About half of Lovebox customers are young couples between 25 and 35 years old, and the other half are families who want to keep lines of communication open despite big moves and life changes. A Lovebox can be a nice going-away present from a mother to her son, or it could be a symbol of devotion from a husband to a wife.

Lovebox is an intergenerational device that serves as a constant reminder of a faraway love.

Customers can download the Lovebox app, which is available on Google Play and the App Store, to set up a direct line of communication to their Lovebox. The team offers tech support every step of the way to ensure people can send the right message at the right time.

“The Lovebox team is full of very talented people,” said Pauline Verdoia, Head of Marketing at Lovebox. “They choose to work for Lovebox, instead of big tech companies, because our mission makes a lot of sense.”

The newly released Color & Photo Lovebox allows users to get even more creative with their messages. Partners can use this advanced feature to send pictures with an extra personal touch. It can be a good way to share a sunset with somebody, even if you don’t live in the same time zone.

“The Lovebox makes every interaction unique. Those happy little things that we could forget in our daily life,” Pauline said. “It’s a tangible way to keep in touch by brightening the relationship.”

The Lovebox team has developed a creative way to give and receive love messages across great distances. People from all walks of life have felt their spirits lift when the heart on their Lovebox starts to spin. Every month, Loveboxes deliver over 500,000 messages around the world.

Many people have used Lovebox to celebrate their more important relationships and let the special person in their lives know they care. Many customer testimonials speak to the impact a Lovebox can have on couples, friends, and families who don’t live close by but want to stay close in spirit.

Lovebox can be a romantic present for Christmas or Valentine’s Day.

One Lovebox customer said her parents live eight hours away, so she and her sister got a Lovebox for their daughters to give to their grandparents for Christmas. It was a big hit. “It’s easy to use, beautiful, and a wonderful way to keep in touch,” the customer said. “We love that so many people are able to send messages.”

“My partner really loved it,” said Oliver D. in his review. “I send messages to it every day, thinking about getting more for future presents to family as well.”

P. Smith said in an Amazon review that Lovebox has become his wife’s new favorite way to communicate with her husband.  “When she sees the heart spinning, she knows it’s from me, and she knows it’s going to be sweet,” P. Smith said. “The best part is that the Lovebox app reminds me to send a message.”

“This is one of the coolest items to keep your relationship strong,” Rusty and Lisa said about their Lovebox. “Sure, you could text your loved ones, but the Lovebox creates anticipation.”

Lovebox can uplift long-distance couples, old friends, or international families, and its private messaging offers a simple and easy way to brighten that special person’s day.

Jean was inspired to invent the first Lovebox as a romantic gesture to his fiancée. The messaging device helped them bridge the distance between the U.S. and France, and it kept their relationship strong while they were apart.

Over the years, Lovebox has expanded to touch many people’s hearts. Whether it’s a Christmas present or an anniversary gift, the message it sends is always a loving and positive one. Lovebox can keep individuals connected to their loved ones, and that is especially powerful for couples who are trying to make a long-distance relationship work.

Lovebox can bolster relationships by providing a fun and imaginative channel of communication that makes hearts spin with joy.

“We want to put a Lovebox in every home in the world,” Pauline told us. “Our goal is to make the daily life of our users better and share more love every day.”