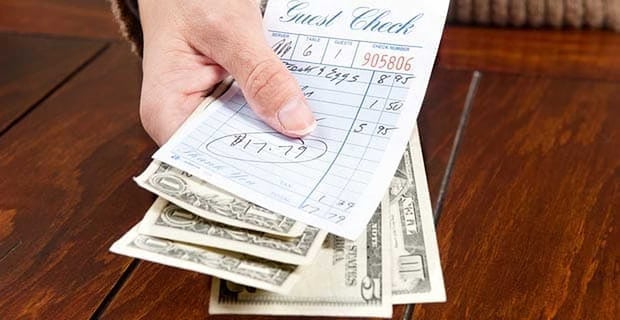 Who Should Pick Up the Tab?

Who should pay for the date in the 21st century? You might think the answer would get easier and more established as civilization forges into the future but no. It used to be skirts were all long or all short, pink was “in” or pink was “out,” paisley suits were trendy or they were hideous. But modern culture is all about the individual taste and preference. Likewise with paying for the date: Today, anything goes.

So what’s a girl to do? How can she know if she should grab the check, wait for him to take it or throw in half? Let’s start with a little common sense, and then work into the more difficult scenarios.

Of course, if he’s a bit older, more established in his career and has the clothes and car to prove it, then don’t give the bill a second thought. Your companionship and the possibilities you represent are worth far more than money to a man of distinction. Just make sure you let him consider and yearn for those possibilities for a while. You bring just as much value to the relationship as he does. So, no matter how much he may spend for you, always remember that you don’t owe him a thing except, perhaps, a smile and your attention.

“Relationships require a healthy give and take, and the way you

both handle the price of dating might even give you some

good insights into your compatibility.”

But what if you are the modern woman with an MBA and an office with real walls and a door, and he’s a hunky bartender who survives on tips? You have to get a feel for the situation. Not an emotional feel but an intellectual one. You’ve obviously got a brain that made you successful in life and business so use it.

Is your stud muffin always texting you to bring home wine or beer? Does he ask you to have Chinese delivered after an early evening “date” in the sack? Enjoy what he’s got to offer you if you must, but don’t support him.  This one might be a bum, so stay with the occasional booty call — on your terms and your schedule.

But what if he’s putting himself through law school? He’s got potential, but he doesn’t have much cash flow now. He feels bad when you pay, but if you don’t pay, there won’t be any real dates. Tell him he can pay it all back to you someday, and pay for a nice date once in a while — not for tuition, car payments, rent or grandma’s operation. Got it? And you can still let him take you on some reasonably priced dates to the movies or art museum.

You have equally modest incomes.

Most often, you’ll probably find a guy whose finances are a lot like yours.  You’re both doing OK and can afford some entertainment, but your resources aren’t unlimited.

Make the first meeting cheap, and let him wonder if it is a real date or not. Maybe go for coffee. If you have to queue up to order and pay, assume you will pay for your own. If he wants to pay, let him pay if you like him, but don’t let him pay if you’re not sure about him or if you know he’s broke. If there is table service or you’re at a bar, they might ask if you want it on one tab or two. Ask him, “Do you want separate tabs?” and go with his answer. If they drop one bill on the table, wait a few moments to see if he wants it.

That’s right — wants it. He’s a man. If he wants this to be a date, he will probably grab the bill. If you grab it, he might believe you don’t consider this to be a date. Yes, it’s the third millennium, but cave law still rules male-female relationships, at least in the early stages. In this man’s mind, if you take that bill, it could be tantamount to neutering him like a new puppy. Be considerate of the tender parts of his manhood.

Here’s something else you might try at the end of that cheap first date if you want to see him again. When the bill arrives, grab it. When he protests, tell him you had a great time and this one’s on you. Then, with your best smile, look him in the eye and say something like, “But you can buy me dinner on Saturday night.” It’s bold, but he likes that about you.

Here are a couple more tips for scenarios you might encounter.

It just makes things seem a bit less “financial” if you don’t divide the check down the middle. Math is not romantic. Get your own bill, give him some cash, leave a tip, take turns paying, or pay for different aspects of the date.

The key is to do what is practical for your situation and his. Work together and talk about it before it becomes an issue. Be considerate of his fragile ego, but help a guy out when it’s the right thing to do. Relationships require a healthy give and take, and the way you both handle the price of dating might even give you some good insights into your compatibility.