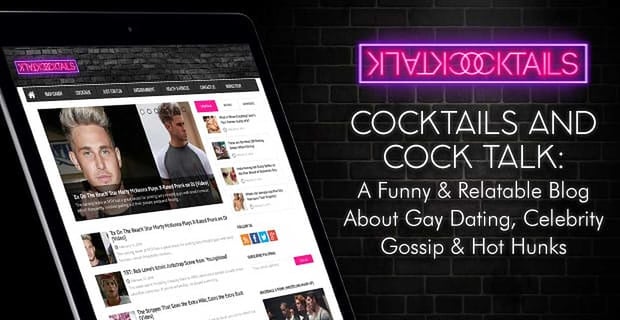 The Short Version: Cocktails and Cocktalk is an unfiltered blog written by a single gay man named Anthony Gilét. Anthony’s brash honesty and hilarious wit delight readers looking to forget their troubles and find solidarity in the gay community. Whether you’ve just come out or consider yourself a seasoned gay dater, you can read the blog to catch up with today’s gossip on dating, sex, health, celebrities, and other hot topics. Over 6 million monthly readers go to CocktailsAndCockTalk.com to laugh, learn, and take a load off their minds. The blog’s explicit language, relatable stories, and riotous tone keep readers coming back for more.

Anthony Gilét started blogging when he was 21 years old. He was single, and he had a lot to say about it. CocktailsAndCockTalk.com became his outlet for discussing his dating frustrations and successes. He was active in the club scene, had hooked up with a few hunks, and enjoyed sharing his experiences in funny and memorable posts.

Anthony Gilét, Founder of Cocktails and Cocktalk, blogs about what he knows: hot guys.

“I went on a string of disastrous dates, waiting for Ashton Kutcher to pop out and shout ‘Punk’d!'” he recalled. “And I just thought, ‘Is it really just me, or are other people experiencing this as well?'”

Anthony described his blog as an unfiltered assessment of dating, sex, and relationships. “I report things how they are,” he said. “I don’t sugarcoat it. I tell it like it is.”

He loves meeting up with friends for some indulgent cocktails and cocktalk, and he approaches his blog with the same friendly, chatty, and sincere attitude. Right now, he writes about about 99% of the blog’s content, but he said he’s keen to expand over time and bring new voices into the conversation.

Whatever your dating style or orientation, Cocktails and Cocktalk has a wealth of juicy celeb gossip and helpful lifestyle tips to pique your interest and give you a laugh.

When he started writing his blog, Anthony’s focus was on telling stories about his own life, particularly his most disastrous dates. He felt that by sharing his experiences he could let readers know they weren’t the only one going through one-night stands and embarrassing blind dates. Many young single men could relate to what he was going through because they were going through something similar. That sense of commonality bonded his readers together.

Today, Anthony continues to tell dating stories in one section of his blog, but he’s also branched out into other subject matters. He publishes new content every day about the latest in entertainment news, health, celebrity gossip, and other things that interest him.

Anthony said his satirical and scathing articles tend to do well with his audience, and many people in the comments section say they love it when he gets real with them. His authenticity and sense of humor makes his articles stick in people’s minds.

“I write like I’m talking to my best friend,” he said. “I write like I talk. I use a lot of slang. I make up words. It’s my train of thought, and that makes it more relatable.”

Cocktails and Cocktalk often discusses dating fails to give singles a much-needed laugh.

Cocktails and Cocktalk is an entertaining platform that’s all about being open about who you are and what you want. The conversational tone of the blog posts gives readers something to think about as they navigate the dating world.

Anthony told us his goal isn’t just to tell laugh-out-loud stories about sex, dating, and cute guys — he ultimately hopes to connect with his readers on topics they can relate to and want to learn more about. By sharing his own experiences, he has started a dialogue about the gay dating scene and how it affects singles and couples today.

“Where are you going with that?” he asked in response to a Grindr user sending him explicit pictures, one of which showed a small bag of drugs. “I know you don’t actually think that’s enough to get me high enough to get filthy with the likes of you. LAWD, no.”

Cocktails and Cocktalk also features a section called Gays Overheard where ludicrous and laughable quotes appear without context. Anthony’s wry commentary on the dating scene adds a bit of levity to the everyday experiences of gay singles. The overall message seems to be: Don’t take yourself too seriously. It’s more fun to just laugh and shake it off.

Whether he’s discussing X-rated cocks or Grindr pick-up lines, Anthony’s first priority is making his readers laugh. Singles sometimes forget how flirtatiously fun and ludicrously laughable dating can be, so it’s good to have a place where men can come together and say, “Hey, that happened to me, too.”

Anthony enjoys sharing the latest gossip with his readers, who come from the US, the UK, and around the world to dish about their love lives in the comments section.

“Deep down, I’m a bit of a romantic,” he told us. “The prospect of love and the quest to find love excites me, so talking about boys on Cocktails and Cocktalk is my fave thing ever.”

Sharing a Laugh With Over 6M Monthly Visitors

Cocktails and Cocktalk attracts around 6 million visitors each month. Anthony said his most popular articles get thousands of reads. His readers can’t get enough of his edgy and truthful writing style, and he enjoys hearing their feedback because their opinions are what keeps him going. He said sometimes people come up to him in pubs or on the street to tell him one of his articles hit home with them.

Some of his more serious articles about the spectrum of sexuality, coming out, or the pressures of dating resonate with gay men in particular.

“We interpret things through a prism of our own pain and past experiences; so the conclusions we jump to are rarely good ones.” — Excerpt from Cocktails and Cocktalk

“It doesn’t happen all the time, but it gives me a warm feeling when people come up to me and say they liked my articles,” Anthony said. “That’s one of the best things about writing a blog.”

In the coming months, Anthony plans to expand his blog to include merchandise, including T-shirts with original designs, so readers have even more to love.

Anthony started writing Cocktails and Cocktalk in his early 20s to talk about his dating adventures and give young single men something they could laugh about and relate to. He shares many juicy and intimate anecdotes to let his readers know what’s going on in the dating scene and celebrity news.

Gay singles reading the blog can take heart that they’re not the only ones dealing with dating disasters. Whether you want to ogle over pictures of hot celebs or roast cringe-worthy pickup artists on Grindr, you’ll find plenty of amusing, alluring, and astounding articles on Cocktails and Cocktalk.

Anthony said he feels fortunate to be able to make people happy with his down-to-earth guy talk. “It sounds so cliché,” he said with a small chuckle, “but I’ve always wanted to make people laugh. The sole purpose of Cocktails and Cocktalk is to entertain people.”