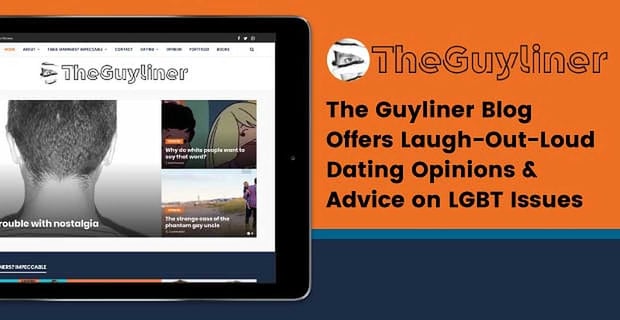 The Short Version: In 2010, Justin Myers started blogging because he wanted to vent about his experiences as a single gay man in the UK. His relatable tone and snarky opinions attracted a diverse online audience, and TheGuyliner.com soon expanded to cover LGBT topics, celebrity news, and other aspects of single life. Today, Justin entertains thousands of readers with his candid reflections on modern dating culture. He has also contributed to several top media outlets, including The Huffington Post and Buzzfeed. Whether he’s detailing one of his 72 first dates or dissecting the first impressions of blind dates from The Guardian, Justin doesn’t pull any punches in his articles. On TheGuyliner.com, readers can ponder the highs and lows of today’s dating scene or simply enjoy Justin’s snarky commentary on some epically bad dates.

Justin Myers may have been a lousy waiter and a mediocre retail clerk, but he can write circles around most people. In 2010, the freelance writer started a blog under the name The Guyliner because he wanted an outlet to write for himself about issues that mattered to him. Most of his articles had to do with being single and gay in the UK.

“I was living by myself for the first time, and writing the blog helped with the loneliness,” he said. “For it to take over my life in this way — which it kinda has — was never my intention. But here we are.”

Justin started his writing career with zero expectations and has been amazed with how quickly his web presence has grown. He now has over 19,000 Twitter followers and has written for several major publications, including The Huffington Post, The Guardian, and Buzzfeed.

His success as a writer stems from the relatable, amusing, and helpful articles on The Guyliner blog. In thousands of posts, Justin speaks candidly to LGBT singles struggling to navigate the dating world. He said the name describes his original intent for the blog: he lined up guys, went on dates, and rated them for his audience. After 72 first dates, he finally ended up on his last first date, which he rated an 11/10.

Today, Justin has moved past his own experiences to write about more generalized dating dilemmas and faux pas. His playful sense of humor comes across in wacky articles with topics like reasons to ditch a boyfriend and ways to destroy a relationship.

TheGuyliner.com is an entertaining place for singles to pick up a few dating tips or share a laugh with someone who’s been there. Justin doesn’t presume to give his audience a lot of high-brow dating advice; instead, he tells stories and makes jokes in hopes that his readers come away feeling more optimistic about the dating scene.

“My mission has only been ever to write and be read,” Justin told us. “I don’t know how to do anything else. I enjoy writing anything that feels like it’s something I should be commenting on.”

TheGuyliner.com is full of fun listicles, dating opinions, lighthearted reviews, and topical articles on a variety of subjects. When Justin writes, he doesn’t restrict himself to one tone, one topic, or one audience. He wants to cover it all — anything and everything related to dating.

While LGBT issues hit close to home with him and often appear in his blog, he told us most of his articles resonate with straight readers as well. After all, some dating struggles — e.g. the horrors of bad kissing — are universal. Justin endeavors to speak to people of all experiences and backgrounds, and he’s proud of the diversity of The Guyliner audience.

“I don’t see my readers as stats. As long as they enjoy what I’m doing, I don’t care who they are.” — Justin Myers aka The Guyliner

Oftentimes, Justin makes a subject more personal and approachable by drawing from his own dating experiences. For instance, he commiserated with singles feeling the holiday blues by telling a story about the time he hugged a Christmas tree after a futile date. He has written extensively about his first dates with anonymous men he calls The Tortured Soul, The Raincheck, The Selfie, The Brat, and other humorous nicknames.

“I also do features which look deeply into popular culture at large or LGBT+ issues,” he said. “These are really popular.”

Every weekend, The Guardian publishes a column called Blind Date, wherein two singles talk about their — you guessed it — blind dates with one another. Justin claims to be obsessed with this column. On TheGuyliner.com, he deftly picks apart the responses given by two people who went on a date together and had the guts to air their thoughts about it in a newspaper.

The Impeccable Table Manners section, where Justin’s tongue-in-cheek reviews reside, is among the most popular sections on The Guyliner blog. Justin told us he doesn’t sugarcoat his opinions, and he trusts his readers to get that — even when he’s poking fun at a couple for talking about worst Grindr hookups on a first date — his intention isn’t to be mean but to entertain.

“Is there anything worse than being on a date and having to listen to someone wang on about their dating experiences,” Justin wrote in one review. “If you want to whinge about your dating dramas, get a blog — I hear it can be very lucrative.”

Justin enjoys discussing the unspoken complexities of dating because there’s a lot of humor there, but there’s a lot to learn as well.

Whether he’s discussing awkward first impressions or the importance of asking before kissing someone, Justin tackles tricky dating subjects with humor, experience, and plenty of gifs. He doesn’t only tease daters who don’t have a clue — he offers serious takeaways on today’s dating culture using his real-life experiences and those of others.

“I am lucky my readers seem to enjoy all these facets,” he said, “so one minute I can write something quite emotional and in-depth, and the next I can share something snarky or hilarious.”

Grateful to Have Readers Who Understand His Core Message

TheGuyliner.com’s comments section is a surprisingly cordial and supportive place. Some readers may get a little sassy, but most want to show appreciation for the writer’s stories and takeaways. Even when the feedback isn’t so positive — perhaps a reader disagrees with the article’s angle or feels an important point was left out — Justin said he feels grateful for every thoughtful comment.

“It’s not always positive, but it’s usually constructive,” he said. “Even the bad comebacks make me think about stuff in a different way.”

Some people seek Justin out in the comments or social media to say his advice gave them a laugh or helped them understand dating better. That’s ultimately why the professional blogger spends long hours at his keyboard making jokes and giving advice — to make a difference in the lives of LGBT daters. “Readers are always interested to hear my take on various issues, and that’s such a marvelous feeling,” he said. “It never gets old.”

Justin said he takes nothing for granted and is continually amazed by the loyalty and enthusiasm of The Guyliner readership. He frequently responds to his readers in the comments to show he’s listening and cares about what they have to say.

“Writers are nothing without readers,” he said. “If nobody’s looking, it’s just a secret diary. To be found helpful and entertaining is such an honor.”

The Guyliner: An Authentic & Relatable Voice in the Dating Arena

From bussing tables while a student to proofreading copy as a freelance editor, Justin worked many jobs before launching his own blog in 2010. He didn’t expect to become a professional blogger, but his wry humor and honest opinions about the nuances of LGBT dating found an audience in the UK. In the last few years, Justin has built a sizable reputation as The Guyliner. It may have taken 72 dates, but he eventually found satisfaction in both his love life and his career.

Justin’s authenticity as a dating blogger strikes a chord with daters of all orientations, and his engaging writing style has helped him expand his audience. In addition to his fun blog, he has contributed to a number of well-known media outlets, including The Guardian, BuzzFeed, Metro, and Irish Times. At the end of 2016, he got a book deal for his first novel, “The Last Romeo,” which will come out in the UK in 2018. Justin’s currently working on his second book while writing a regular column on British GQ.

The Guyliner’s personable tone has attracted daters of all orientations and backgrounds.

Justin certainly keeps busy, and the industry has taken note of his dedication and talent. For instance, the 2017 Comment Awards had Justin on the shortlist for Arts, Culture and Entertainment Commentator of the Year. “It felt strange, horrific and, yet, brilliant to be recognized,” he said. “It would be lovely to get more of my work out there and have more of that — if only for the free bacon sandwiches and lovely pastries at the award breakfast.”

While Justin is incredibly happy with his progress as a freelance writer and editor, he’s also eager to tackle new creative projects down the road. “Ideally, I’d just carry on making sure I keep on wanting people to publish me!” he said. “Slowly but surely, I’m achieving what I want to do. Onward!”