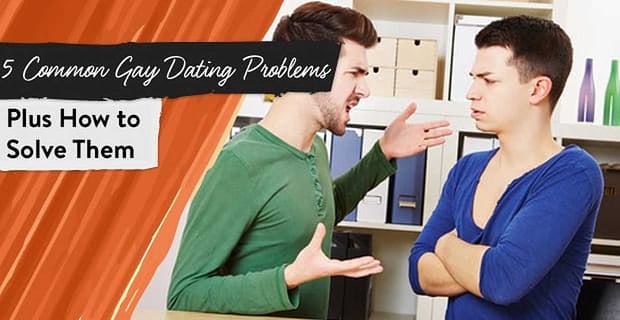 5 Common Gay Dating Problems (Plus How to Solve Them)

While navigating the gay dating world, you’ll likely face a few dilemmas. Dating is an art, not a science, so devising creative solutions to these scenarios comes with the territory. You often have to be able to think on your feet to be successful in this fast-paced scene.

This article will follow the story of a fictional man named Tony. He’s single, gay, and on the prowl for a life mate. His dating journey isn’t without a few bumps in the road. We’ll discuss five dating problems Tony (or you!) could potentially encounter on the quest for Mr. Right — and we’ll provide sure-fire tips on how to manage these situations with poise, compassion, and a healthy sense of humor.

1. Do You Have Sex Right Away or Wait?

Tony and Rick just had a fantastic time together after meeting online. After a couple of weeks chatting on a popular dating platform, they scheduled a date at a local coffee shop. They had so much fun sipping lattes that they decided to walk along the beach to get to know each other better. Tony was thrilled that Rick shared his interests in musical theater, soccer, and funny cat videos. They communicated well with each other, and the chemistry between them was electric.

Waiting a little while to have sex with the guy you’re attracted to is a good way to make sure he’s actually interested in you, not just your body.

While not a popular suggestion, I recommend singles initially hold off on taking the date to a sexual level. Having sex right away defines your relationship before a foundation of trust, emotional connection, and effort has been established. In other words, that short-term romp makes it difficult to sustain a long-term relationship. When conflicts arise (as they inevitably will!), the couple won’t have the depth and substance to carry them through adversities. Such weak bonds make it all too easy to part ways and move on to the next conquest.

Additionally, holding off on sex can help you ensure that the guy you’re seeing is really interested in getting to know you as a person — as opposed to just wanting to get into your pants. This means you weed out flaky individuals who are just in it for the sex and focus on mature men truly interested in cultivating a relationship. While there certainly are many long-term relationships that started off as one-night stands, the prognosis tends to be stronger when intimacy comes after a strong friendship and bond has been created.

2. Should You Call After a First Date or Leave Him Wondering?

Tony plopped onto his bed that night after coming home from a whirlwind first date with cutie Brett. He hadn’t clicked with somebody like that in ages, and he felt excited by the possibilities in store. But how should he proceed? Should he call Brett the next day, or should he hold off for a few days to a week? He didn’t want to seem desperate and scare him off. But he also wanted him to know how much he enjoyed the experience. Should he call right away or build anticipation by waiting?

People are over dating games and so-called “rules,” so call or text him if you had a great time.

Why play games? While many books out there tout rules about waiting three days to a week to ask for a second date — this only promotes inauthentic and manipulative game playing. If you like the guy you met, call him within the next day or so. Let him know how much you enjoyed meeting him and that you would love the opportunity to get together again.

I advocate being direct, assertive, and taking charge of your dating life. So go for it. If it’s meant to be, it will happen. By holding off, you could leave your date feeling that you weren’t interested, and he could meet someone else in the interim. Then you’ve lost your chance. Develop the mantra: No more missed opportunities!

3. If You’re Not Feeling It on a Date, Do You Tell Him or Ghost Him?

Tony wasn’t feeling it with the Tyler, who met him for a quick drink at the local pub, but he could tell this guy was into him and wanted to get together again. Anticipating the moment when they said goodbye, Tony squirmed in his seat and wondered what to say when the guy asked him out again.

It would be so easy to say yes to the invitation and then never contact him again. He could easily ignore his texts and calls, disappearing into the abyss like it seems everyone does in the dating world. But Tony feels guilty because this guy is really nice. He doesn’t want to hurt his feelings. What’s a guy to do?

Think of how you would want someone to treat you — if it would hurt your feelings to be ghosted, then don’t do that to a lackluster date.

Man up! It’s cruel to be dishonest with people, and it’s cruel to leave them hanging, wondering what the status of the date is. We need to start treating each other better in the gay community. Our actions have consequences on the feelings of the people with whom we interact, and dating makes people feel vulnerable and crazy enough as it is.

If you’re not interested in seeing someone after a first date, it’s important to act with integrity and say so. Let the guy know that you enjoyed meeting him, but you didn’t feel that it was a match and you want to wish him all the best. Or maybe you only felt a friendship vibe. If that’s the case, be direct about that as well. It’s as simple as that.

Dating requires us to be sensitive to the needs and feelings of the men we meet; it’s also character-building to be honest, straightforward, and compassionate. Ask yourself how you would like to be treated and act accordingly. Many issues in our society could be minimized if we all were kinder to each other.

4. Should You Reveal Your HIV Status Right Out of the Gate?

Tony is a healthy HIV-positive man whose condition is undetectable. He often wonders when the right time is to share his status with the men he goes out with. You can live a full life with proper treatment and, there have been no documented cases of HIV transmission from an undetectable individual.
However, there still remains a lot of fear, stigma, and discrimination in the gay community around HIV/AIDS. Tony doesn’t want to alienate himself from prospective dates because of his status, but he also needs to solicit informed consent from his sexual partner. What should he do?

One easy way around this is to post your HIV/STI status on all your dating profiles so people are aware before they even reach out to you. This can help screen out individuals who may be uncomfortable dating someone of a different status.

I recommend revealing your HIV status and other personal health information within the first three dates before anyone gets too emotionally invested.

If you’re not meeting from a dating site, moral, legal, and ethical issues abound for HIV-positive singles. By law in most states, you do have to give informed consent. Before you’re sexual with anyone, you’ll need to share your status to give them the choice about whether they want to proceed. I always recommend getting this consent in writing as a safeguard. You can do this by saving your chats or emails to a file on your computer to document that you’ve disclosed your status and your sexual partner has given his consent. Just in case.

In dating situations, you should share this personal information within the first three dates before anyone’s heart gets too invested. You should definitely do it before you have any sexual contact. Procrastinating this uncomfortable conversation can cause your dating partner to potentially feel duped and resentful when you finally bring it up. Sharing your HIV or other sexually transmitted infection status can be very scary, but it’s an essential part of being a responsible dater.

5. Do You Date Within Your Own Cohort vs. Daddy/Son Pairings?

Handsome middle-aged Tony, also known as The Silver Fox among his friends, got set up on a blind date by one of his pals. He finds himself torn, however, because his date is 15 years his junior. His friend says the guy is really cute, down-to-earth, sophisticated, and has a hot gym body. Tony feels turned on just by the thought of him.

However, he worries their age difference could pose a barrier to building a long-term relationship. Will they have anything in common? Is the generation gap too big for them to overcome? Should he just cancel the date to avoid wasting his time and energy?

Here’s my advice: Age disparities in gay relationships are fairly common, and it doesn’t have to be an impediment to building a lasting partnership. The gay dating pool is small as it is, and it can be extremely challenging to find suitable mates in your area.

Being within the same age range doesn’t matter as much as having the same values as well as sharing physical, mental, and emotional chemistry.

Though Daddy/Son relationships tend to be stigmatized in many circles, what’s most important is the emotional connection, maturity, and vision that the two men bring to the table. As long as the motives for getting together are in the right place (e.g., not doing it for financial reasons, control issues, etc.), these relationships can be very fulfilling and healthy.

Same-age relationships have built-in commonalities due to sharing the same era in which you grew up in — while age-disparate partnerships have unique dynamics people must grapple with due to being in different stages of life. However, sharing the same values is what truly matters to the longevity of any relationship, and your differences can sometimes be good complements.

Single men should screen their dating prospect thoroughly to ensure he measures up and offers a compatible balance of physical, mental, emotional, social, intellectual, and spiritual attraction. Age shouldn’t be a dealbreaker.

Gay Dating is Wrought With Trials, But You Can Overcome Them

Throughout your dating journey, you’ll find yourself in many situations where you’ll have difficult decisions to make. When you’re at a crossroads in life, it’s easy to get lost in worries and fears, but try to enjoy the dating stage you’re at and make the best decision you can. Being single is a time to have fun, experience new adventures, and learn more about yourself as you seek that ultimate synchronicity with that special someone.

You can enjoy your singlehood and minimize the stresses of dating by living in accordance with your personal values and morals, demonstrating sound judgment, thinking before acting, and conducting yourself with integrity. By following these principles, you’ll streamline a path toward a more grounded and fulfilling dating life.

How to Know the Man You’re Interested in is Gay

Why Won’t My Boyfriend Have Sex With Me?

How to Be Proactive in Dating (LGBT Advice)

Are My Gay Dating Standards Too High? 5 Signs That Point to Yes