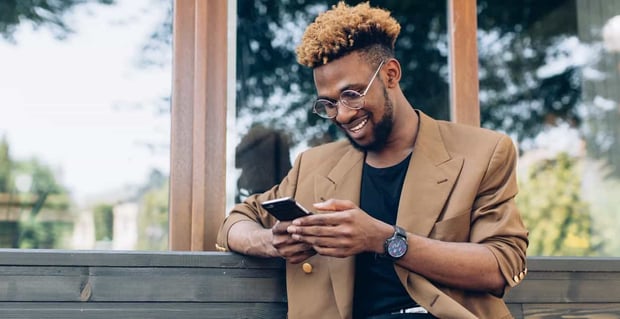 Let’s face it: We’re living in a technological world. Sometimes I wish we could rewind time to the meet-cutes of yesteryear and run into someone interesting and dateworthy while we’re waiting for our morning brew at the coffee shop. Instead, a growing number of people are meeting on online dating sites, and their initial social contact is often a text message. Unfortunately, texting has created an expectation of communication without any definable subtext.

I was scrolling through my social media and saw a post on how people dislike receiving voicemail preferring, instead, to receive texts. Some people would say that it wastes time to leave a voicemail because they would never listen to it. However, my argument is that you are wasting the other person’s time by having them repeat themselves when you don’t listen to their minute-long voicemail.

The way we communicate has changed drastically. For example, studies show most people hate receiving voicemails.

I come from a very old-school way of communicating. I understand this. However, when I am planning to make a phone call, especially in a business sense, I have everything mapped out on a piece of paper in front of me. It’s rare that I would be running around in conversational circles. The key element here is that I would say that about 80% of my calls are planned in some capacity — maybe a day or so in advance.

Sometimes it can take me nearly a half hour to write a concise email with my specific talking points. My phone etiquette takes less than that. On the other hand, if I’m not on a time clock, of sorts, I love chit-chatting with a friend and our planned 10-minute catch-up conversation turns into double that when we lose track of time.

How did picking up the phone become one of the more egregious things we do?Personally, someone checking in via text on how my day is going is one thing, but listening to that person’s voice say the same thing is something else. Talking on the phone is more personal and special. To help navigate this technological squabble, here are my top three tips on texting.

1. Say More Than One Word in the Start of a Conversation

I know that avoiding this greeting style in texts is generally understood, but I think about how many conversations started this way (i.e. “Hi,” “Sup,” “Hello,” and “Wyd.”) during my active years of online dating.

A text that begins this way feels unemotional to me. It almost feels like I was just a check mark on someone’s to-do list during their day. It’s almost robotic.

You know you can muster up more than “Hey” or “Wyd?”

The more you write, the more it makes someone feel good. There really isn’t a lot of endearment coming from something that has less than five letters.

Asking good questions meant to get to know someone also helps increase the mutual attraction. Here are some examples of questions to that effect: “Hey! What are you doing this weekend?” or “Hey! I’m going to go see the new DC movie — have you seen it? Do you like superhero movies? I’d have to say Superman is my favorite.” The last text question created three opportunities to connect with another individual in just a minimal amount of verbiage.

2. Respond in a Timely Manner

I hope this doesn’t sound too vulgar, but, if you have time to pee during the day, you have time to respond to a text. When people say they have been “busy,” I often wonder how productive they were that day if they couldn’t find the time to shoot off a quick reply to a text.

Although harsh, a colleague of mine doubted these driven and super self-motivated hustlers, as my colleague refers to them, are really as busy as they say. In his opinion, many, if not most, are just incredibly lazy and will do anything to avoid holding down a job.

Communication is the glue that holds a relationship together. If you have back-to-back meetings one day, let the person know you’ll get to the message by the end of the day. If someone texts you that he had a nice date, don’t wait until the next day to respond. You know you looked at your phone before bed, and it just feels nice to be on the receiving end of that gracious effort. If something is more time-sensitive, make it known (i. e. “Hey, babe! I am at my desk now and making reservations for us this weekend. Can you let me know what time is good before the end of the day?”).

On a side note, if you matched with someone on a dating app, give yourself a three-day window to make something happen like planning your first date in advance. If it doesn’t happen, you’re not really into him, or he’s not really into you. When I was dating online, it always felt better to reach out first, and, if I didn’t get a response, I would unmatch with him. I figured I had done my part, so it was up to him to hold up his end of the bargain. Make the time for things that are important to you, and that will give you a good first impression.

3. Don’t Have Serious Conversations That Should Be Done Over the Phone or In Person

I have been on the receiving and giving end of this, and it never ends well. The thing about texting is that it should be more about transactional things and not profound conversations.

I believe that writing analytical paragraphs wastes a ton of time, and you’ll probably be going over the same things again in person if the issue remains unsolved. It’s best to set up a time in advance (transactional text) to go over the more personal issues (more emotional and sensitive) in person.

Some conversations — such as your past dating experience — are better had in person.

As a professional matchmaker, I really discourage people from getting to know each other via texting. I think that can set people up for more disappointments rather than wins. It saves you from the “He was so great via text, but honestly I didn’t feel any chemistry in person” experience. Meeting in person allows you to feel that physical response from his body language.

The Main Point is to Be Proactive in Texting and Dating

The bottom line is that being proactive is the key to dating success, especially in regard to texting behavior. Nothing good comes from someone who waits three days to text you back. And you shouldn’t make excuses for him that maybe he was busy.

How to Gain Integrity in the Gay Dating World

When She’s Not Ready to Give You Her Number