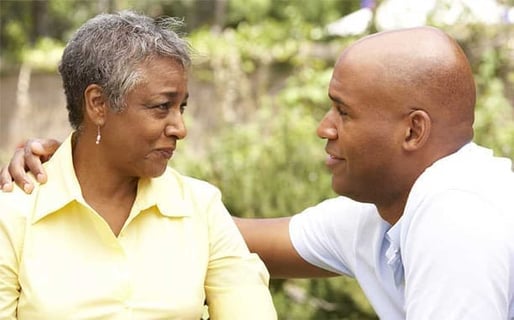 Getting back into the dating scene, whether it’s been a 20-year-long hiatus or two, can be nerve-racking and scary. Now add on top of that being a mom to adult children. How do you create meaningful dialogue with your kids to let them know you’re dating again?

Well, you do so as a mature adult and hope they respond in the same manner.

Everyone deserves a shot at love.

Let’s look at Lucy, a fictional 60-year-old widow and mother of three grown sons (ages 38, 40 and 42). Lucy’s husband passed away five years ago. After all the time she’s spent mourning and being lonely, Lucy is ready to start dating again. She just doesn’t know how she’s going to tell her sons.

Instead of spilling the beans midrelationship, it’s smart for Lucy to tell her boys that she plans on dating, so that when it happens they’re not as shocked.

Also, if Lucy stands up to them in a surefire, confident way, they have no other choice than to get behind her and support the decision. After all, everyone should be given a second or third or fourth shot at love.

Let’s look at another situation. Barbara has been divorced from her husband for just under a year. They were married 35 years and have two grown daughters together.

Barbara wants to start dating again and her daughters think it’s too soon. In fact, they’ve been very adamant that they won’t support their mother in a new relationship. What does Barbara do?

This is a sticky situation. Alienating her daughters is the last thing she wants to do, but her marriage to their father was over way before a year ago, and she’s ready to find happiness again.

Barbara should sit her daughters down and explain all of this to them. But she should also prepare herself that no matter what she has to say, her daughters won’t support it.

Dating when you have adult children is difficult and stressful. They are grown-ups now and have their own opinions on how you should live your life – what’s acceptable and what isn’t.

Stand up for yourself, be honest, be mature, and try and put yourself in their shoes.

How to Date Again for Senior Women

How to Feel Young in Your Dating Life

How to Date a Widow

How to Introduce Kids to a New Date

How to Date After the Death of a Spouse