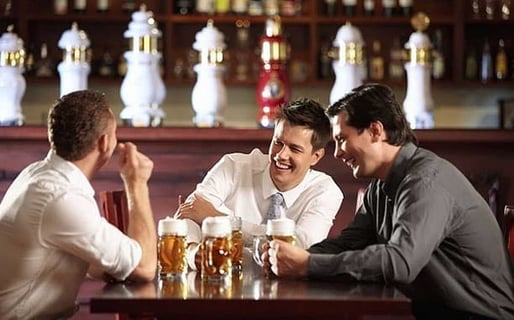 How to Approach Gay Men at Bars

Let’s face it — even in a world that is considerably more gay friendly than it was a decade or two ago, gay men are still in the sexual minority, which makes the whole process of meeting men in bars considerably trickier than it is for straight men.

Straight men can safely assume the women they meet in bars are straight, and if those women aren’t straight, making this assumption isn’t seen as a big faux pas.

Gay men, by contrast, not only need to deal with the potential embarrassment involved with approaching a straight man and assuming he’s gay, they also need to worry for their physical safety, as even though we live in a more accepting environment than we ever have before, it’s not like gay men aren’t still assaulted for making an incorrect guess about a man’s sexuality (or a man’s comfort with his sexuality).

That being said, it isn’t impossible for gay men to meet other gay men at bars — far from it. Gay men just generally need to be a little more cautious and calculated about who they approach and how they approach those guys in bars.

Even with bars hosting an increasingly mixed-sexuality crowd these days, especially in major metropolitan areas, the most convenient way for a gay man to approach another gay man in a bar is to primarily pick up men at gay bars.

Even if the man you approach at a gay bar ends up being straight, you’re unlikely to put yourself in a negative situation for making the move.

Yet, not every gay man wants to exclusively hang out in gay bars, and aside from increased convenience, there’s no reason you have to.

of interest is very simple.”

There are a bunch of ways you can use your friends to help identify the sexuality of men at bars.

You can have your female friends come on to the guy you’re interested in while you observe his reactions. You can have your friends go up and ask men at bars whether they’re gay or straight. Lots of gay men have their friends ask this question for them and then bring the man back to the group if he’s also gay.

And don’t forget, if you hang out at the same bars with the same friends regularly, there’s a good chance someone in your group will recognize and have a bead on the sexuality of the men you see, so drill them for information before you make your approach.

Yes, it’s difficult, nerve-racking and potentially dangerous to approach a man at a bar when you don’t know his sexuality, but there’s a really easy way to figure out which side of the fence he swings on.

Show visible interest in him and see if he reciprocates. Straight men will usually catch on when a man is making eyes at them and they won’t make eyes back.

Sending obvious indicators of interest and gauging responses is a very simple, easy and often accurate way to judge whether a man will welcome your approach or not.