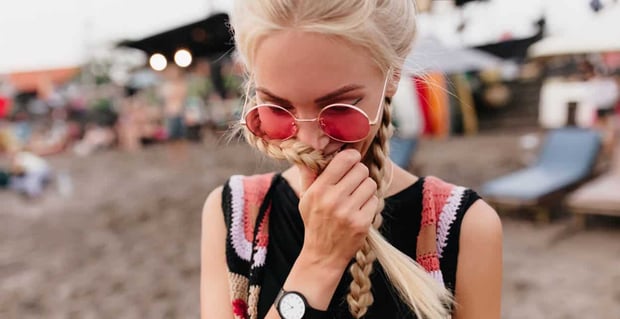 Is there a part of you that wishes you could be like those people who seem to easily go up to anyone and know what to say and have everyone like them? Do you imagine not being nervous about saying something stupid or having people think you’re boring?

That’s really what you worry about with dating. You actually have to talk to someone. Face to face. For an entire coffee. Or dinner. You may think about dating, but you then hesitate and wonder what you would do during an awkward silence.

Maybe you’ve convinced yourself that you suck at dating and there’s no point in continuing to try. You’re tired of putting in the effort and energy — only to clam up, feel a loss for words, and then get rejected.

If you’ve all but given up on dating because you’re convinced you’re too shy to be successful, then I want you to think again. Here are some tips to get you out there:

1. Remember Your Thoughts are Powerful

While there’s absolutely nothing wrong with being shy, if you’re allowing it to keep you from dating, then your shyness has become an obstacle to meeting people.

Ask yourself what you believe about yourself because you’re shy. Do you say to yourself “I’m shy, so I’m…”

If you have any of these misconceptions about yourself just because you’re shy, then try to challenge these thoughts. If you’re like most shy people, then you’re actually one of the most interesting people out there because you’re very introspective and think a lot. The only issue is that all of that is stuck inside of you, struggling to come out.

If you look at the two lists above, the first negative list is all about how you ARE as a person, while the second list is about how being shy affects your life.

If you believe negative things about yourself, then you’re bound to feel bad and convince yourself that you’re not good enough for anyone to want to date.

But, if you’re able to see how being shy affects you and does not define you, then you have the ability to change how it affects you. Just because it’s hard for you to start a conversation doesn’t mean you can’t work on that. There’s nothing wrong with YOU as a person.

2. Tell Yourself You’re Not Alone in This

I would bet the vast majority of people dating find dating anxiety-provoking, especially in the first few dates. Remind yourself of this the next time you’re getting ready for your next outing with someone new.

Take comfort in knowing you’re not the only shy person in the world.

Take a big deep breath as you’re about to walk out the door to leave for your date and say: “We’re probably both nervous and worried about putting on a good first impression and not getting rejected.”

Throughout the date, it might be a good thing to continue to do this as you notice your mind racing or your nerves taking over.

3. Ask A Lot of Questions

People, in general, love to talk about themselves. Before the date, try and come up with (or even look up) some great questions to ask someone when you’re first meeting them. Try and review the questions before the date, so they’re fresh in your mind.

People generally like talking about themselves, so ask a lot of questions, and you won’t have to talk about yourself so much.

Some common questions may be:

Typically, it’s best to stay away from politics, religion, and past relationships until you two are further along in your relationship.

If you can choose the where and what, then its likely that you’ll be comfortable with not only the environment, but you’ll also have more to say about what you’re doing. This could help reduce the instances of your going blank when it comes to conversation.

You may be more comfortable if you choose when and where to have the date.

Being somewhere you’re comfortable instead of at a location completely new to you will automatically reduce your anxiety. Plus, by choosing the place and activity, you’re automatically revealed a lot about yourself with the other person without even saying anything.

5. Get Out of Your Head and Focus on What’s Important

When your mind is racing away with thoughts about what she’s thinking about you and if you’re saying and doing the “right” things, you’re not actually present in the date. Overthinking is distracting and won’t allow for true connection or flowing conversation.

All too often shy people are trying to say and do what they believe are the right things because they want to be liked so much. They don’t really take the time to be in the moment and actually notice how they’re feeling around the other person or whether they find them a potential partner.

Try not to overthink things.

Remember, you’re not the one being judged here for approval. You’re both there to see how you feel about each other. If you’re so in your head and just want to avoid being rejected, then how do you know you even like the person? It’s great to be liked, but only if it’s by someone you like as well.

6. Wear Something You Feel Attractive and Comfortable In

Make it as easy as you can on yourself when you get out there. If you’re already self-conscious about what you’re going to say and do, at least wear something you feel attractive and comfortable in. The last thing you need is to be worried about anything more than you need to be.

If you like what you’re wearing, you’ll have one less thing to worry about.

Trying to wear something that’s out of your norm because your friends said it looked good on you or because it does look good, but it’s completely uncomfortable, is not the best idea. Go to your dates thinking and feeling as good about yourself as you can.

7. Be Honest About Your Shyness

Imagine just starting off by telling her: “You know what? I’m so shy that I actually considered not dating because I feel like I’m so awful at it. There are moments when I just find myself drawing a blank about what to say, and it feels so awkward.”

If you just put it out there when one of those awkward silent moments happens, you can say something like: “See, here’s one of those moments I was talking about. I would love to say something totally fabulous and interesting, but there’s nothing. Total blank.”

Sometimes opening up about your shyness will kick off the conversation.

It could be a conversation in and of itself, and, if you play it right, it could actually be quite comical rather than awkward.

The more you place yourself in situations where you can practice overcoming your shyness, the more comfortable you will be socializing, including dating, going forward.

Most Importantly, There’s Nothing Wrong With You!

The bottom line is that yor being shy is nothing to be ashamed of. Nor is it something that has to get in the way of you having a happy, healthy, and loving relationship. So get out there and start dating!

Dr. Frankie Bashan is a renowned relationship coach and dating expert. She is a licensed clinical psychologist with nearly two decades of experience working with couples and individuals and specialized training in the field of trauma. She possesses a unique combination of formal training, innate emotional intelligence, and communication skills that allow her to help couples struggling with relationship issues of all kinds. Dr. Frankie is the CEO & Founder of LittleGayBook.com, which focuses on personalized matchmaking for lesbians and bisexual women, and has successfully connected couples across the United States for the last decade.