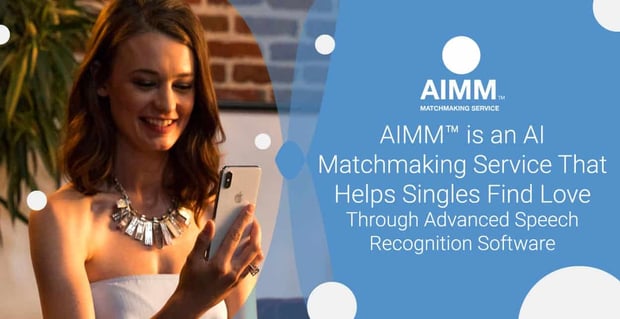 The Short Version: When AIMM Founder Kevin Teman was single, he wasn’t having a lot of success on dating apps, so he turned to a matchmaker hoping to find a more personalized service. As a tech entrepreneur, Kevin had the idea to combine the care of a matchmaker with the convenience of a dating app. He created AIMM, or the Artificially Intelligent Matchmaker, using his knowledge of speech recognition software. The app gets to know users by asking them questions; then the AI works to develop the most compatible matches.

Like many singles of his generation looking for love, Kevin Teman started his search on popular dating apps. Despite the convenience of these platforms, he couldn’t find any true connections.

“I started using dating apps in my late 20s. I knew it was important to find a partner who could boost me, but the dating apps didn’t connect me with anyone who fit,” he told us.

So Kevin sought the help of some exclusive matchmakers, and he found the validation and personalization he was looking for.

“My matchmaker interviewed and coached me. It was like night and day compared to what I experienced with dating apps. A lot of hand-holding, a lot of teaching,” Kevin said.

He understood that he was lucky, and that not every dater could afford private matchmakers like the ones he’d found. That sparked an idea. Kevin leveraged his experience developing speech recognition software to combine the best elements of a matchmaker with the simplicity of a dating app.

That’s how the Artificially Intelligent Matchmaker, or AIMM, was born. AIMM asks singles questions to understand the characteristics they desire in a partner. Then, the app creates customized matches with singles who have similar thoughts about dating, marriage, and their futures.

As singles get to know one another, AIMM continues to provide coaching and affirmations similar to the advice Kevin received from his matchmaker. In that regard, he feels that AIMM is more like a human matchmaker than it is like any other dating platform.

“I made the app to resemble human matchmaking by asking you questions and then matching you with compatible people,” he said. “It’s a dating app meets Siri.”

Using Customized Questions to Learn More About Each User

Most AIMM users are in their 30s or 40s, which is why the app asks a fair number of questions about long-term plans. Users aren’t typically looking for anonymous hookups, but, instead, are committed to finding lasting relationships. AIMM helps them in this mission by asking serious questions about their preferences and what matters to them in life.

For example, AIMM may ask users about the type of house they envision themselves living in with their ideal mate. Then, the app may display images of a log cabin, a brick mansion, a modern condo, and other options from which a user can choose. It also asks singles to rate on a scale from 1 to 10 the importance of certain categories — including pets.

The questions cover a wide range of relationship topics as well as others, including art, politics, and intelligence.

When users download AIMM, they don’t have to initiate conversations as they might with a voice assistant. Instead, the AI prompts them to answer questions throughout the day. For example, if users wake up early, AIMM might ask if they consider themselves a morning person.

“It’s leading the conversation and asking you questions,” said Kevin.

AIMM doesn’t ask each user a set series of questions, either.

“It learns about you as you keep talking to it,” Kevin said. “So, depending on what your answers are, it will take a different route through questions to understand your personality and how to match you. It invents a new conversation flow for every user.”

Coaching Daters as They Get to Know One Another

AIMM’s get-to-know-you process takes about a week. After that, the app has compiled enough data to start introducing users to one another.

When AIMM matches users, each will receive an AI-generated introduction to that person. For example, AIMM will tell a user that the person he or she matched with is highly-reliable and motivated in their career. Further, it sends pictures of the person, as well as recordings of his or her voice.

Another compelling aspect of the matching algorithm is that users don’t always know what AIMM is reporting about them to their potential partners. That’s a key differentiator from dating apps as users can’t manufacture an online persona that isn’t genuine. AIMM may even describe a user as caring and compassionate, even if those aren’t the adjectives he or she would use in a dating profile.

After two users decide that they want to pursue an AIMM-created match, the app will offer advice about how to proceed with the courtship. If two users want to talk on the phone, AIMM will set up the phone call and provide each user advice about what to say.

“AIMM will give you tips, like, ‘keep it light, talk about casual things, make a joke,’” Kevin said.

After the call ends, AIMM asks both users for feedback and dispenses more advice as the courtship continues.

“It will give you advice all the way up to the date,” Kevin said.

AIMM Plans to Expand Its Reach to More Locations

Kevin managed to turn his experience with dating apps and matchmakers into a platform that combines the best aspects of both. Today, AIMM primarily focuses on singles in Kevin’s home state of Colorado. However, he wants to see the app reach a larger audience as soon as possible, and his team is working on expanding its user base into California.

Further, Kevin continues to make changes to appeal to more people. He recently worked with singles who were seeking same-sex relationships to develop questions that would better fit their life experiences.

Though AIMM is an artificial intelligence matchmaker, Kevin understands that some singles also want to connect with a real person to discuss their dating successes and concerns. To that end, he plans to partner with human matchmaking services soon.

“Down the line, I want to give daters the option to call an actual human matchmaker, so they can relate emotionally. Bringing human matchmakers into the process will enhance the experience,” he told us.

These details fit into the AIMM’s mission to be “the first app to use respect as a core feature of its development.”

As someone who struggled to find love on dating apps, Kevin said he is passionate about transforming the industry through AI technology. He has already created an intelligent dating experience that feels more personal and wants to ensure that as many users as possible find their way to the platform.

“We want to get into the mainstream, and I’m ensuring that AIMM is on the path to getting there,” he said.