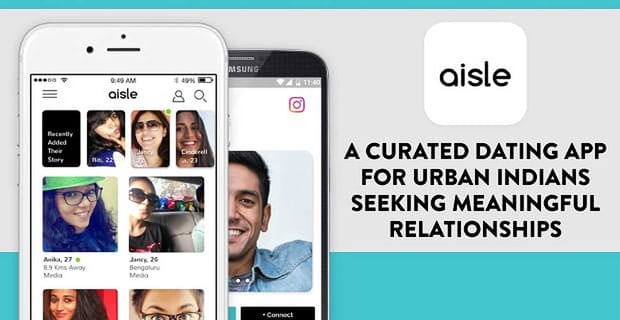 The Short Version: Designed as an online dating solution, the Aisle app connects urban Indians who are ready to get serious about dating. Since 2014, this dating application has changed the lives of singles in India by staking out a middle ground between traditional matchmakers and casual dating apps. Members of Aisle don’t want to get married tomorrow nor have a string of one-night stands — they want to date high-caliber people who are relationship material. Aisle’s fun communication features open singles up to dynamic and flirtatious conversations with new people. On this trustworthy platform, members can build deep connections based on common goals, values, and interests.

For the past few years, fast-moving apps have dominated India’s online dating scene. Superficial platforms introduce random people to each other, with little regard for their values, family, faith, and other deep-seated characteristics. Tinder-inspired dating apps concentrate on physical attraction and disregard true compatibility, thus harming the overall user experience.

When dating apps open the floodgates to all sorts of unsavory individuals, adult singles looking for a long-term relationship often feel discouraged by flaky dates and inappropriate messages.

Able Joseph, Founder of Aisle, felt frustrated by modern dating apps, so he built a solution for serious daters like him.

What serious-minded daters need is a bouncer to keep out the undesirable people and make sure everyone on the site is there for the right reasons. When someone is monitoring who’s allowed in, the online dating community becomes more secure. That’s why Aisle, a members-only dating app in India, has created a curated online environment where high-caliber singles can escape the riffraff and date in peace.

“Many Indian men don’t know how to interact with women online,” Able Joseph, CEO and Founder of Aisle, commented. “That’s where dating apps have failed. So, I thought a closed network would be a good solution for urban Indians.”

Launched in July 2014, Aisle made waves in the Indian dating industry by offering something totally unheard of: an exclusive dating app for relationship-oriented singles. Every member has to be verified by the team before going online and chatting up members. On Aisle, daters enjoy a safe, female-friendly space populated by vetted date prospects.

Hundreds of thousands of users have joined the Aisle community because they want to move past pointless flirting and get into a lasting relationship. You can download the app on iTunes or Google Play to see what all the fuss is about and start building deep connections with high-quality singles in India.

“We handpick all of our members,” Able told us. “We’re not a one-size-fits-all dating service. We’ve taken a wise middle path between traditional matchmaking companies and online dating applications that are basically Tinder clones.”

The Aisle team has taken pains to cultivate a safe and friendly community that raises the overall quality of the dating experience by being selective about which singles can join. To become an active dater on Aisle, you have to apply for membership and be approved by the team. This helps block fake profiles and low-class daters.

Aisle profiles offer insights into who the person is and what they’re looking for in a date.

There are no subscription fees on the app, and you do not have to pay to chat online. The communication system relies on members buying invites to be able to initiate an interaction. Three invites cost ₹2,000 or USD $33.

If the person accepts your invite, you can start chatting. If not, you get your invite back and can use it on another prospective date. Invites have no expiration date so you can use them with little risk; it’s doesn’t cost you much to see if someone is interested in starting a conversation. The invites facilitate meaningful interactions on the site by opening communication up to all members. It’s like buying a drink for someone. Sending an invite is a great way to build mutual matches and allow communication to flow freely.

Additionally, Aisle has recently come up with a new feature called roses. Members get seven roses per month and can make a romantic gesture by sending one to a crush. As Able said, “You send a rose to someone you think you want to explore a future with.”

Working out of a two-bedroom apartment, the Aisle team is a small but dedicated group of innovators. Eight people handle every aspect of the site from customer relations to backend development. “Each person on the team basically manages an entire department,” Able explained. “Because we’re a small startup, we have to work hard and put in those long hours.”

Every day, the team discusses new ideas to change the dating landscape and new features to improve the Aisle community. “If it adds value for our members, we start building it,” Able said. Team members get excited to try out their ideas and build tools that make a real difference in people’s lives.

In addition to Aisle, this industrious team has dreamed up a few other groundbreaking apps. For example, Heel the World welcomes all women in India to be part of the community, not just singles. HTW is home to mothers, married women, and even expats living in India.

“Heel the World is derived from an interesting and new concept of using apps just to make friends,” Able explained in an interview. “My team is confident the app would be a safe and fun way to make friends.”

Since it launched, Aisle has connected thousands of Indian singles in long-term partnerships. A lengthy success stories page is dedicated to sharing the heartfelt stories of couples who met on the app. This sets the Aisle community apart from other dating networks that don’t have such a page because they haven’t successfully matched enough people.

Kavleen met Avikaran on Aisle and fell in love with his caring, generous spirit.

After talking for nearly six months on Aisle, Avikaran and Kavleen agreed to meet for their first date at Starbucks. They both had a good time, but Kavleen thought her date seemed uninterested and would forget about her in a few days. Little did she know, Avikaran went home and told his family he’d met the One. They were married within a year.

“I had never met a woman who was so independent and career-oriented, yet knows how to enjoy life and take care of her family,” wrote Avikaran about his soul mate and wife. “She’s the kind of woman you’d only meet once in your lifetime.”

Many couples have fallen in love thanks to the values-driven dating community. In fact, Aisle’s Founder also met his wife on the dating app. Able told us he created the dating tools, in part, to help his own love life — and it worked! In December 2014, he started talking to a woman online and offered her his friendship. A year later, they tied the knot.

“We started as friends with an objective of growing fond of each other without any influence or pressure,” he said. “Such is the mindset of most people who connect with others on Aisle.”

Aisle has grown by word of mouth as users have good experiences and recommend the app to their friends. Such organic growth is a sign that the site is working. Able said that eight of his friends have connected with long-term partners through Aisle. He has seen firsthand the difference this effective dating tool can have on an Indian single’s life and wants to share the love with singles across India.

“Ours is a very sincere effort to solve the problems we see in modern dating,” Able explained. “It feels pretty good to make money while improving society.”

What Aisle brings to Indian singles is a totally original dating platform where quality, personality, and values reign supreme. This app has managed to strike a good balance between cheap superficial interactions and traditional matrimony matching. Its thoughtful approach to dating has intrigued hundreds of thousands of users eager to date more realistically and meaningfully.

“The fact that Aisle is curated won me over. It’s a brilliant idea, and I wish you guys all the best.” — Nivedita, an Aisle member from Chennai, India

Instead of cheesy pickup lines, users send each other roses and invitations to chat. It’s a courteous atmosphere designed to keep urban singles satisfied and connected to thousands of love interests. If you want to go beyond swiping, Aisle offers Indian singles a reliable and enriching alternative to today’s flaky dating culture.

“Matchmaking as a whole has been gamified all over the world,” Able told us. “Finding ways to solve that and help singles is what we want to explore with our dating app.”