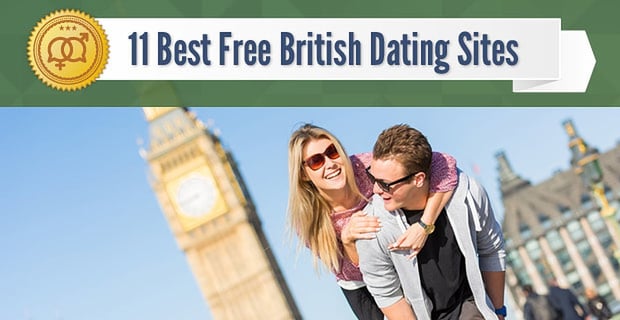 Dating sites give singles the opportunity to be a little choosy and make the most of the dating experience. There’s no need to rush because you have plenty of options at your fingertips. Approximately half of Americans are single, and the same is true for the Brits. According to ReviseSociology.com, 16 million people in England and Wales are single and have never cohabited or been married — that’s approximately 34.5% of the population.

Our job is to help lower the world’s single population one date at a time, and today we’ve set our sights on Britain. We are bringing you the top 11 dating sites in the U.K., and they are all 100% free to try.

Great Britain is one of the largest demographics for Match, so you have millions of singles to choose from. Once you start signing up, you’re given a free membership that allows you to add and edit info and photos, view, like, and favorite profiles, and receive matches, among other things. Match also has a comprehensive blog that can help you solve pretty much any dating problem, including what to say in a first message and what to do on a first date.

OurTime was one of the first senior-focused dating sites to ever exist, and what makes it so successful to this day is that it’s part of the Match family. You know you can trust OurTime to find you your ideal match and do so in a safe manner. Whether you’re on the desktop or mobile version, it’s free to join and use OurTime, so you won’t have to break the bank to find a date.

Soulmates strives to help you “meet someone worth meeting,” and the site does that in many ways. You won’t have to pay to become a member, and the award-winning customer support team is available 24/7 if you ever have a problem. More than 15,000 people join Soulmates every month, so it should be rare to not have someone to talk to. Owned and operated by the Guardian, 80% of Soulmates’ members read the well-known paper, so you already have that in common if you’re coming to this dating site.

MySingleFriend’s mission is for singles to “fall in love with love again,” and the site accomplishes that by offering a totally unique process. Here, it’s your friends who fill out your profile and tell users what kind of person you are and what kind of date you’re looking for. MySingleFriend understands that talking about yourself can be awkward, so it sought to eliminate that step. One former member named Mike said, “This site has been excellent, but success leads me to leave. Thank you so much.”

Tinder, which launched in 2012, is available in more than 190 countries, including England, Wales, Scotland, and Ireland. Some other impressive numbers worth mentioning is that Tinder is responsible for more than 20 billion total matches, 1.6 billion swipes a day, and 1 million dates a week. Tinder was the first dating app to offer match swiping (right if you’re interested and left if you’re not), and we anticipate that it will keep coming up with innovative ways to bring singles together.

OkCupid was 100% free when it was founded in 2004, and it’s still 100% free to this day. Another aspect of OkCupid we really admire is that it’s one of the most inclusive British dating sites and apps in the world — offering numerous gender and sexual orientation identifiers such as intersex, gender fluid, pansexual, and questioning. Recently, OkCupid also changed its process to allow users to specify their preferred pronoun (e.g., him, her, they). The dating site offers in-depth and quirky profiles where your personality and looks are on display.

Bumble is somewhat of a new British dating app (it launched in 2014), but it’s made a huge impact on singles as well as the dating industry as a whole. The main component of Bumble that’s different than its competitors is that only women can initiate a conversation when it’s a heterosexual match. The team did this because it wanted to put women in the driver’s seat and help them avoid being bombarded with inappropriate photos and messages. Bumble is a progressive force in the dating scene, and its feminist values have won over a lot of single men and women.

A glance across a crowded room or a brush of a hand at a bookstore — these are the kind of moments that Happn tries to mimic online. Every day, the app will show you who you’ve crossed paths with in real life and where (your exact location will be private). This is an easy way to find out if you have things in common with a match. Happn doesn’t charge people to create a profile, browse for matches, receive matches, and communicate in certain ways, so it’s definitely worth checking out.

Date British Guys is a popular dating site that brings together British men and American women. The folks behind this free site know there’s just something special about that relationship combination — namely because its two founders are an American woman and a British man. Date British Guys has been featured on BBC, the Telegraph, and other media outlets and has dozens of success stories to inspire you before you sign up.

I Love Your Accent

I Love Your Accent strives to close the gap between single Brits and Americans. Not only does the site offer all the necessary tools for matching and chatting, but it also offers videos and accent uploads where you can actually hear each other and take the conversation to the next level. After you join, your profile has a chance of being showcased in the Featured Members, where you’re sure to get more attention. Check out our full review here to learn more about the dating site’s founding story and mission.

Muddy Matches’ focus isn’t just on single British men and women — it also focuses on single British men and women who love the country and/or farming lifestyle. Since 2007, more than 200,000 people have registered for the site, and to join them, all you have to do is provide your gender, the gender you’re interested in, and date of birth. Muddy Matches’ customer service team can be a bit flaky, though. Just a heads-up.

The Single Blokes and Birds are Waiting for You!

We’re not the only ones who are on a mission to match every single man and woman in the world, including those in Britain. These 11 dating sites are as well. Again, Match and OurTime are our two favorites, but definitely feel free to test all of them out. You don’t need any money to do so, and it’ll only take you 10 minutes or so. Cheerio!