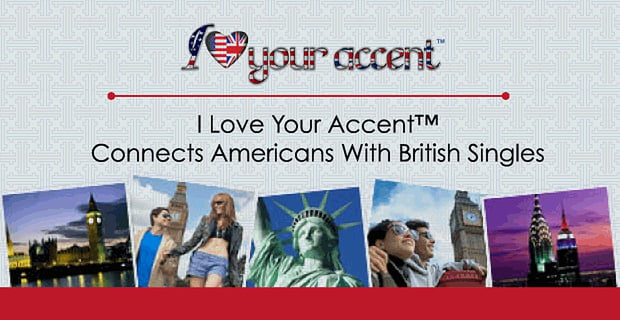 I Love Your Accent™ Connects Americans With British Singles

The Short Version: For many American daters, hearing someone whisper sweet nothings in their ear in a delightful accent can be a major turn-on, and finding a partner with a sexy British accent is usually at the top of their list. If you’re wondering how to connect with people living across the pond without hopping on a plane, ILoveYourAccent.com has you covered. The unique dating site is designed to connect those who love foreign accents with those who have them. ILoveYourAccent.com allows singles to upload audio or video of their voice, join groups, and chat with other singles to make lasting international connections.

James was handsome. He had an impish dimple, piercing blue eyes, and a mop of blond curly locks. He was fit from hours of rock climbing, and his strong jawline was the foundation for a wide, perfect grin.

When he started talking to me about the similarities between Brexit and the current political situation in America, I found my heart skipping a beat. This civil engineer from England was smart and witty, but it was more than his intellect that piqued my interest. It was his accent. I found myself swooning. And he, too, kept commenting on my American accent, shyly smiling at the way I talked.

Rochelle Peachey founded ILoveYourAccent.com to bring US and UK daters together.

No doubt about it, accents can be big turn-ons. An exotic turn of phrase or a funny pronunciation can make a regular conversation something much more memorable. It was just luck that I ran into James in a coffee shop in New Zealand, but many daters are more proactive in seeking out partners with accents — especially those from Britain.

ILoveYourAccent.com is a dating site that is designed to help users find their own version of James.

“When I moved to America, people kept saying to me, ‘I want to meet an English guy. Please help me find an English guy,’” said Rochelle Peachey, the Founder of ILoveYourAccent.com. “Then I’d be in England, and they’d say, ‘Oh, please help me find an American guy.’ So I knew there was something there. This dating site is niche — Americans meeting Brits and Brits meeting Americans.”

What started out as a simple idea to connect her friends with singles across the pond has organically grown to more than 46,000 members and has been featured by media outlets in both the United States and the United Kingdom. Since it began, the site has produced marriages and romances, all rooted in the thrill that comes from hearing your name spoken in a different accent.

Founded By a Relationship Expert Who Began With Personal Ads

Rochelle studied dating and relationships back when The Times of London was publishing personal ads. Before that, readers could find personals in the back of other newspapers, but many were too racy and were viewed with disdain. So, when a reputable publication joined in, it added to the credibility.

Rochelle’s book “Eat Your Lonely Heart Out” was inspired by a successful personal ad.

“I had an idea to place a personal ad and then write a story about who would answer one because you couldn’t see anybody, there were no pictures,” she said. “It was a little blurb and a phone line where you could record a short message and see who answered.”

She said she wrote a relatively boring — not sexy or crazy — personal ad, and when she checked her messages 10 days later, she had more than 700 replies. Rochelle and her editor were blown away. She decided to arbitrarily listen to every third reply and start accepting dates to see who these guys were.

“I wrote my first book called ‘Eat Your Lonely Heart Out‘ because I thought that people would come to me and say that meeting strangers was not good. I always meet them at the restaurant so nothing could go wrong. I wouldn’t accept rides from anybody, and I would pay my way, or offer to, at least,” she said.

That research opened her eyes to the dating scene and gave her valuable insights into the mind of daters. But it wasn’t until she moved away from the UK that she had the idea to create a dating site of her own.

A Site Where Brits Can Meet Yanks — And Fall In Love

After Rochelle and her husband moved from the UK to Florida, she began hearing a familiar refrain from many people she’d meet: “I love your accent!”

“People say that to me all the time, and how can you get mad at someone who says they love anything about you?” she said. That inspired her to start ILoveYourAccent.com.

She worked with a website developer to create the site and then devoted much of her time to growing its membership. She started by asking every single person she knew — both in the US and the UK — to sign up.

ILoveYourAccent.com is easy to use, and members can sign up in just a few minutes.

But as friends told friends, the site’s user base began to grow organically. As a result of that measured approach to growth, the site is populated by genuine profiles and fosters a strong sense of community.

“Then I started going on television shows, including a BBC show on Valentine’s Day. That burst it open for me, and I started to build on and on from there,” she said. “When I had a few hundred members, then I decided to offer premium features.”

Registering a profile with a couple of pictures and audio or video of your accent is free, as are instant messages with other site members. Users can upgrade to a VIP membership for unlimited access, and ILoveYourAccent.com offers the option to purchase a background check from one of its site partners.

Members range in age from 30 to around 55, and, while most are from the US and the UK, the site attracts users from Canada, Australia, and a few countries in the Caribbean.

Creating a profile is free, and users can upgrade to premium membership for more features.

This convergence of cultures can also lead to some humorous misunderstandings.

“There was a girl from Kentucky who called herself the ‘KY Queen,’ and she messaged me and said, ‘You know, I’m getting a lot of strange messages from men,'” Rochelle said. “Another girl called herself ‘Sweet and Thick,’ but, in England, ‘thick’ means ‘dumb.’ In the US, ‘thick’ means ‘on the heavier side.’ I explained that to her, and she was shocked to learn she was calling herself stupid. We changed it to ‘Rubenesque,’ and she had better results.”

Plans for a TV Show, Site Improvements, and More Developers

Rochelle said she’ll continue to play a major role at ILoveYourAccent.com, even as it grows. She said it makes her happy to know she’s helping people find love they otherwise wouldn’t discover.

“Some people want to be on their own, but I believe they don’t want to be alone. They say they’re just not meeting anyone, but that’s because they’re not doing anything about it. You won’t win the lottery if you don’t buy a ticket!” she said. “Maybe you don’t have a lot of money, but you can get online and chat to someone on the other side of the globe, and, at some point, there’s a chance you can meet.”

Along with improvements to the site, she said she is also developing a television show that will follow singles from the US and the UK who are looking for love — and sexy accents. The key, Rochelle said, is to find someone who’ll set a date for a meeting to see if the chemistry is there in addition to the lingual attraction.

“When you have a long-distance relationship, don’t let it be going on forever. One of you will have to make a move,” she said. “If you’re in love, it can work. Have a date in mind when you can be together. An open-ended relationship can fizzle out. You have to work toward love.”