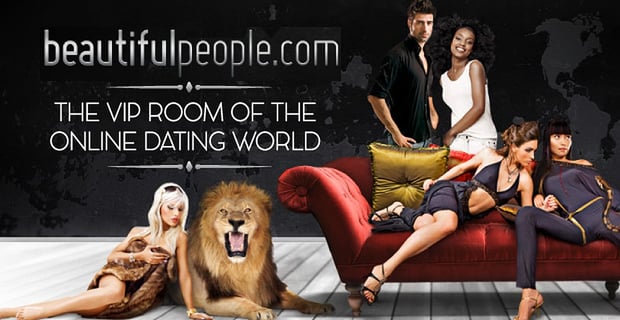 BeautifulPeople.com: The VIP Room of the Online Dating World

The Short Version: With its unapologetically honest attitude and member-curated userbase, BeautifulPeople.com has created the largest, most exclusive dating site for attractive people in the world, “where beautiful relationships begin.” BeautifulPeople is available in more than 150 countries and has turned away more than 10 million singles, ensuring that users are only connected with other “aesthetically blessed” men and women.

One of the most common frustrations people express about online dating is that they’re not attracted to the people the dating sites match them with. Whether he’s a few inches shorter or she’s curvier than what you like, it’s hard to form a long-lasting relationship if the initial physical chemistry just isn’t there.

With BeautifulPeople.com, the largest community of exclusively attractive people in the world, that concern goes away because beauty is in the eye of the voter.

A dating site where current members vote in new members based on their appearance and basic profile information, BeautifulPeople makes sure users only see men and women who they may find attractive.

“It’s based on a fundamental principle of human nature — and that is we all, at least initially, want to be with someone who we find attractive,” said Greg Hodge, Managing Director of BeautifulPeople. “You don’t walk into a bar or club and look across the bar and say ‘look at that beautiful man’s or that beautiful woman’s spirit’. Maybe in an ideal world, but the reality is that’s just not the way it works.”

Greg was kind enough to give us the inside scoop about the motivation behind BeautifulPeople, the details of its voting system, and how he embraces the controversy that comes with catering to the “aesthetically blessed.”

Singles Want to Be With Someone Attractive, So BeautifulPeople Created a VIP Room Just for Them

Greg is no stranger to exclusivity, having owned a private members nightclub in London in the early 2000s. He came across BeautifulPeople in 2002, when it was just a small Danish dating site.

BeautifulPeople.com has turned away more than 10 million singles per the preferences of their members.

After Greg took over the site, he launched U.S. and U.K. versions in 2005 and went global in 2009. BeautifulPeople has seen tremendous success ever since, accepting more than 850,000 users, becoming available in over 150 countries around the world, and turning away more than 10 million singles based on member votes.

BeautifulPeople is powered by a basic principle of human nature: People want to be with someone they’re attracted to. And since beauty is subjective, BeautifulPeople’s rating system was designed to give power back to singles by letting them define what beauty is in their own way.

Existing Members Do the Voting: How BeautifulPeople Democratized the Dating Process

BeautifulPeople has democratized the online dating process with its one-of-a-kind voting system. To get accepted onto the site permanently, singles sign up and put up a picture and some basic profile information. Then, over a 48-hour period, they’re voted on by existing members of the opposite sex.

“It is based primarily on attraction, but once you uncover the character behind the beautiful members with their profiles, then they become more beautiful or less so,” Greg said.

While waiting for the verdict, potential members can get a feel for the site by browsing other profiles and chatting with these exclusive members via email, IM, video and voice chat, and discussion boards and groups.

If the majority of votes are positive, the person’s profile is accepted and they’re given full access to BeautifulPeople’s database of hundreds of thousands of attractive singles, as well as private events and parties held by fellow members.

On BeautifulPeople.com, existing members vote in new members based on their profile photo and info.

If a single isn’t voted in, he or she can always try again by submitting a new photo and profile text. Greg admits that it’s a tough business model, but he’s seen that’s what people want.

“You can imagine having a shop on Rodeo Drive where you turn away 90% of people who knock on the door, but that’s the nature of the beast,” he said.

Another thing singles don’t have to worry about on BeautifulPeople is members not looking the same in real life as they do online. Whether someone has a few more gray hairs or doesn’t exactly look like Leonardo DiCaprio like they let on, BeautifulPeople has a profile verification process to combat misrepresentation.

Users can either chat with a site administrator or email the team a picture in real-time of them holding a piece of paper with their username on it to prove their photo hasn’t been doctored. Then their profile is given a stamp of authenticity.

“It lends credibility to our database,” Greg said.

Different beauty trends are often reflected in how users vote on BeautifulPeople.

“There are all of these subtle cultural differences in how people perceive beauty, which is why if you’re being voted on by your countrymen, those votes count so much more,” Greg said.

BeautifulPeople’s Key to Success: Making It OK to Be Honest About Your Desires

Whether it’s a double-take or jaw-drop, people tend to have knee-jerk reactions when they see a beautiful person, and BeautifulPeople doesn’t try to sugarcoat that fact. While the site is often called shallow and discriminatory, Greg doesn’t believe there’s anything wrong with wanting to be with someone you’re attracted to and actively seeking out that person.

“Communities need to be exclusive to serve the greater purpose of the community. We’re open to every race, color, creed, religion, and ethnicity,” he said. “Is it exclusive? Yes, it is because our users want it to be. Is it politically correct? No, because it’s very honest.”

“Is it exclusive? Yes. Is it politically correct? No, because it’s very honest,” Greg Hodge said.

And while the controversy is prevalent, Greg and the team take it with a grain of salt, especially since they receive positive feedback on a daily basis. And the numbers speak for themselves. Besides getting thousands of emails from people who are grateful for this service, BeautifulPeople is also responsible for thousands of dates, hookups, and relationships and more than 700 marriages.

“The success stories — that’s the most rewarding aspect of it all for us,” Greg said. “But people use BeautifulPeople for many different reasons. Some want the fairy tale. Some just want to hook up. Others want validation. The fairy tale is always what resonates strongly with me, but whatever the reason is, it’s certainly proved to be a very useful tool.”

BeautifulPeople has done a great job of creating a safe space for people to be upfront about their desire to be with an attractive partner. And the site’s main focus will always be to continue addressing the perceived “taboo” needs of their audience and offering these singles an alternative to mainstream dating sites.

“If you’re going to be on a mainstream dating site, you’ll be getting emails from people you’re just not interested in because you’re not attracted to them,” Greg said. “Wouldn’t you rather be on a site where everyone is attractive? That first hurdle at least is removed, and that’s the concept.”