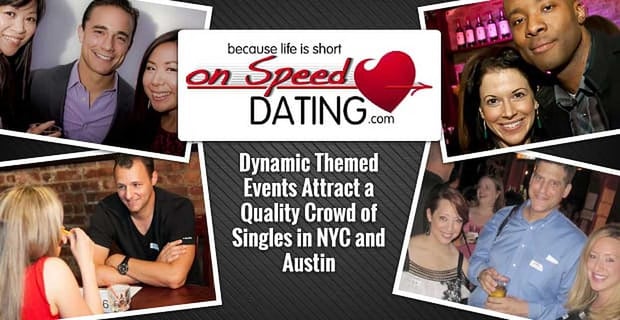 On Speed Dating: Dynamic Themed Events Attract a Quality Crowd of Singles in NYC and Austin

The Short Version: On Speed Dating is a privately owned speed dating service connecting singles in New York City and Austin, Texas. This top-rated company made its name in 2008 by organizing themed events for specific types of daters who desire particular types of partners. Hundreds of niche events cater to popular turn-ons in appearance, career, interests, and background, so daters waste less time talking to incompatible people. Whether you’re looking for blonde women or well-endowed men, On Speed Dating satisfies many specific dating preferences with exclusive events for groups of 20 to 60 singles who are each other’s type. Giving you many opportunities to meet your match, On Speed Dating also hosts large singles events for up to 1,000 guests and provides diverting icebreakers to help everyone loosen up. If you’re tired of weeding through unfiltered date prospects, On Speed Dating’s themed events offer an efficient, fun, and simple solution to kick-start your love life in dating environments built on mutual attraction.

New Yorkers Amber Soletti and Carmine Di Re were both single in 2008 when they started going to speed dating events around town. They hoped to meet someone attractive and available but found themselves continually disappointed by the random caliber of attendees sitting across from them.

Because the speed dating events were open to anyone within a certain age range, Amber ended up talking to many men who were not her type. The 5’10” single wanted a boyfriend who was taller than her and shared her political views, and yet she was forced to agonize the minutes away in awkward conversation with vertically-challenged Republicans. She thought a more selective and interest-specific event would be effective at matching singles up, so she and Carmine decided to plan one.

Amber Soletti was inspired to start On Speed Dating in 2007 because of her own experiences as a single New Yorker.

That was the inspiration for “Size Matters,” a speed dating event for guys over 5’11”. Standing at the door, Amber got out the measuring tape to make sure no one misrepresented themselves to get a date. The height theme was a success and led to many pairings between tall participants.

“We started just selfishly organizing events for what we liked — because we wanted to use the events to meet people for ourselves,” Amber told us. “I liked guys with accents, so we did a ‘Men with Accents Are Hot’ event. Carmine liked teachers so we did ‘Hot for Teacher.’ And it just spread like wildfire.”

Soon On Speed Dating had established a reputation for hosting themed speed dating events to address common deal-breakers, including height requirements, wanting kids, political views, body types, professions, and hobbies. On Speed Dating events let daters be honest about what they’re looking for, and NYC singles flocked to these imaginative and fun-filled gatherings.

Growing by word of mouth, On Speed Dating raised eyebrows for focusing on specific interests, backgrounds, and fetishes. But it worked. No other New York dating service was doing themed speed dating events at the time, and the idea of a roomful of date prospects tailored to certain interests was appealing to a lot single men and women.

Now On Speed Dating has over 100 themes for events held in New York City and Austin. The events have proven to be incredibly popular among daters, and the company has a staggering membership of 60,000 people. Over the years, On Speed Dating’s premier system has facilitated a lot of relationships, marriages, and hookups between quality urbanites who aren’t afraid to go after what they want. Amber herself found love at her company’s own events and recently got engaged to the tall Latin man of her dreams.

“Everyone has dating dealbreakers,” Amber said. “We’re not shallow — we just know what we want. Everything isn’t for everyone, and there’s nothing wrong with having preferences.”

From “Skinny Minny” to “More to Love,” On Speed Dating serves different types of people with its exclusive events. The team is selective about who they let in the door because they want to foster a themed dating environment centered around certain attributes that matter to daters. It’s not personal; it’s efficient.

“The themes aren’t meant to be hurtful to people,” Amber emphasized. “If you’re not a Skinny Minny, that’s OK. I’m a size 12, and I want to go to events where people are attracted to me and want to date me.”

This targeted approach to speed dating gives attendees a systematic way to narrow down their date prospects and go after the type of person they find attractive. Whether you’re turned on by tall men at “Size Matters” or drawn to short women at “Short and Sweet,” On Speed Dating events encourage singles of all orientations to be straight up about what they’re looking for and who they’re attracted to.

Singles in NYC and Austin can choose a dating theme that appeals to their personalities.

On Speed Dating’s streamlined speed dating process gets straight down to business and doesn’t waste time like the back and forth of online dating can. Each mini date lasts for just three minutes, which is ample time, according to Amber’s experience, for daters to assess chemistry and decide if they want to meet again.

Some themed events also provided in-depth date feedback to attendees. At “Tough Love” events, two dating coaches (one man, one woman) go undercover to observe participants and provide notes on each person’s dating style. All attendees provide feedback on their dates as well, noting on their scorecards why they’re interested or not interested. Taking all that information, the On Speed Dating team writes constructive dating advice so singles can gain insight into what they’re doing right and wrong.

“It can be life changing for people,” Amber said. “One woman in her 20s found out that most men thought she was significantly older than she was because of her mannerisms and the way she dressed.”

On Speed Dating hires mostly singles to host its themed dating events and bring people together in a fun atmosphere. Because they’re allowed to date at their own events, these hosts are highly invested in what’s going on and want the night to be a success. Such experienced hosts guide the night and help participants break the ice.

“What differentiates us as a speed dating service is how engaged and passionate our hosts are,” Amber said. “They really get involved and understand the importance of these events.”

The large events, for anywhere between 200 to 1,000 singles, encourage people to interact with one another with fun icebreaker games like asking trivia questions or delivering cheesy pickup lines. The fireman trivia game has proven a lot of fun for singles because it gives women a reason to approach a hot firefighter with a pre-scripted conversation topic, and it allows the men to be the expert and explain the nuances of their job to women who are interested in dating firemen.

“Our parties are themed on a larger scale,” Amber said. “We do everything we can to facilitate introductions and conversations between people and empower singles to start a conversation without feeling silly or awkward.”

It doesn’t matter if you’re gay or straight, old or young, tall or short, On Speed Dating comes up with all sorts of themes to entice singles to come out of their shell. In one night, you can meet dozens of potential matches. Singles events offer the opportunity to flirt, attract a date, and potentially fall in love.

Amber encourages singles to go to the events and parties with an open mind and be receptive to forming all types of bonds with people, from platonic friendships to long-term relationships. “You never know,” she said, “that friend you made at the event could introduce you to a coworker or a brother who’s perfect for you.”

Amber met her fiancé in 2012 at a New Year’s Eve party organized by On Speed Dating.

Being open to all dating possibilities is key, Amber explained. The On Speed Dating Co-Founder knows as well as anyone that sometimes your happily-ever-after story takes a while to reach you. She had to have patience while sifting through her own events in search of a match.

After years of hosting events and trying her luck, Amber fell in love with a guy she met at a Size Matters event in 2012. They didn’t exchange numbers then, but when she ran into him again while hosting a New Year’s Eve party, she sealed the deal with a kiss at midnight. After five years in a relationship, he proposed in March 2017. Today they live happily in Austin, Texas.

“I’m my own success story now. Love is a numbers game,” Amber said. “The more people you meet, the more likely you are to meet that one person.”

Since 2007, On Speed Dating has created a dating phenomenon in New York City and Austin by customizing events according to interests, appearances, careers, political views, and more. Here, singles can feel confident that everyone in the room meets their standards, in at least one attribute. It’s a solid dating strategy to cut through the crowd and filter your dating choices to a self-selected group. On Speed Dating saves time by introducing you to a targeted dating pool.

Whether you’re attracted to flight attendants or firefighters, tall guys or plus-size women, cougars or geeks — On Speed Dating has hundreds of carefully curated events for you to choose from. The event themes constantly evolve and expand to meet the needs of singles everywhere. In the coming months, Amber is looking to establish events in Los Angeles and then franchise On Speed Dating’s unique themes for singles throughout the country.

As On Speed Dating grows, Amber’s team brainstorms new innovative ideas to refine the dating process. Their goal is to make it easier and faster for singles to meet people of quality and date successfully as a result. For instance, an exclusive event type called “Ranked” is invite-only and designed for previous participants who scored a match rate of over 25%. During these special nights, On Speed Dating pairs up the best of the best and promises a flirtatious evening with likable singles who know what they’re doing.

Ultimately, On Speed Dating has become successful because it taps into common dating desires and gives singles what they want. The company has mastered the art of bringing people together in fun, sexually charged atmospheres.

“We have a model that works, and I’d just want to tell singles not to give up too easily,” Amber said. “You can’t get discouraged. Timing is everything, and all it takes is one person.”