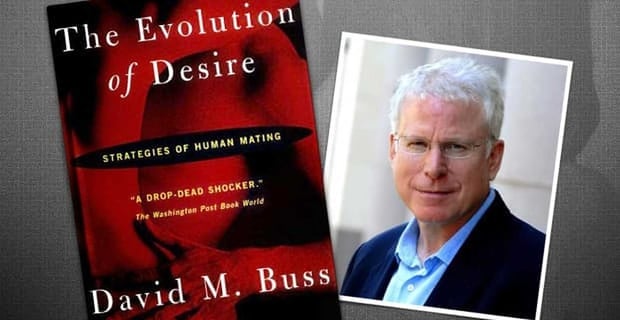 TL;DR: Dr. David M. Buss’ innovative book “The Evolution of Desire” looks into our past to reveal some surprising findings about our mating psychology. Based on the most in-depth study ever conducted on the subject, you won’t be able to look at dating and relationships the same.

Comprised of discoveries from the largest study on human mating, which consisted of more than 10,000 people of all ages from 37 cultures worldwide, “The Evolution of Desire” is the first book of its kind, giving a comprehensive, scientific description of our mating psychology.

Written by Dr. David Buss, a noted psychologist and professor at the University of Texas at Austin, there’s no better book to read on the topic.

What is human mating psychology?

“The Evolution of Desire” covers numerous aspects of human mating psychology, including short- and long-term committed mating, tactics people use to attract mates, strategies people use to retain mates, various forms of conflict that emerge on the mating scene and mating emotions, such as love and jealousy.

“The Evolution of Desire” is based on the largest study ever conducted on human mating.

“It starts with what men and women want in a mate and what our desires are in a mate,” Buss said. “Everything follows from what we desire in a partner, so that’s the key to everything else. If you know what someone else wants in a mate, then the successful tactics of attracting that person will, in the end, fulfill their desires.”

Strategies, emotions and conflict are all important components of human mating psychology, which Buss said are often under-researched or misunderstood, especially jealousy, which actually plays a very large role in the mating process.

“People often see jealousy as an immature emotion or as a sign of insecurity or low self-esteem,” he said. “Well it turns out that almost everybody has this emotion of jealousy, and it serves a very important function in guarding the relationship, preventing mate poachers from intruding on the relationship and also sometimes even serves as a signal of commitment to the partner.”

The first edition of the book came out in 1994 after Buss spent years and years studying and publishing scientific articles about human mating.

His goal was to give people a different understanding of the subject and reach a wider audience with his research.

The first version spurred huge interest in human mating, so Buss released a revised version in 2003 with two new chapters that focus on a few scientific conundrums still left out there, such as the female sexual orgasm and sexual orientation.

David Buss, author of “The Evolution of Desire”

“What I wanted to do was capture, in those two chapters, the progress that had been made about understanding our mating psychology in the nine years since the first book was published and also focus on some of the remaining mysteries of mating that people still don’t know to this day,” he said.

One of those major discoveries of the book is what Buss calls “cross-sex mind reading,” where people often consult their own mating psychology to try to understand someone of the opposite sex, which can be problematic because men and women have, in some respects, very different mating psychologies.

“I think really an in-depth understanding of the opposite sex can help avoid a misunderstanding from occurring in mating and relationships,” he said. “It [the book] also does provide important insights into successfully attracting members of the opposite sex and then also having fulfilling relationships once you’ve already successfully attracted someone.”

Going against the mainstream

Buss, who plans on reviving the book again or writing a new one on the topic, said at the time, “The Evolution of Desire” was sort of a rebel in the social science environment and broke new ground in the human mating field.

“It provides knowledge that just simply didn’t exist before about what men and women want in a mate,” he said. “I think that the universality of our evolved mating psychology has been a major kind of scientific revolution and source of insights.”