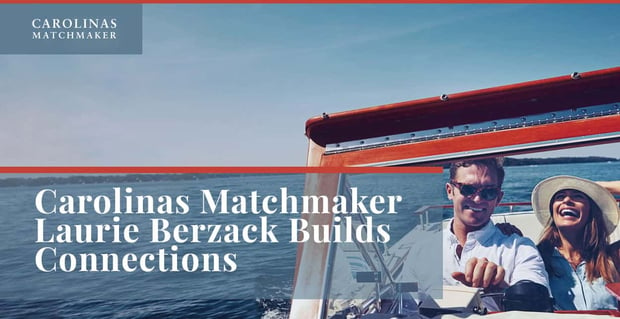 The Short Version: Four out of five clients who work with Carolinas Matchmaker Laurie Berzack find a long-lasting partner. Laurie’s methods are effective because she uses her intuitive sense as a trained social worker to understand what makes singles tick. With Laurie on their side, clients save time sorting through unsuitable partners and have more time to connect with viable ones. She also offers dating coaching that helps singles overcome insecurities and romantic woes.

Carolinas Matchmaker Laurie Berzack didn’t set out to become a professional matchmaker. Instead, her journey began by setting up friends who she thought would hit it off — and it turned out she had a knack for recognizing compatibility.

“I started introducing friends and learning as much as I could. I called up everyone I knew and asked them who they knew who was single. I started making cold calls,” Laurie said with a laugh.

Laurie met with so many singles that she developed a keen ability to read between the lines. Most importantly, she learned to distinguish between what people said they wanted and what was good for them.

When she decided to launch her own business, she studied dating, relationships, and matchmaking even more intensely. Today, 16 years later, she’s one of the leading matchmakers in her region and Co-Founder of Matchmakers Alliance, an organization that promotes best practices in the industry worldwide.

“We’re going to be going to Cancun in November. We haven’t had a conference in two years because of COVID-19, and we’re also excited to be with each other again. Being so interconnected with my colleagues allows my practice to increase and improve my reach,” Laurie told us.

Laurie’s matchmaking clients are men. And, while women can also hire Laurie as a dating coach, they can add themselves to her database for free.

When a client works with Laurie, she determines how they can attract the right people into their lives.

“I feel like people are rusty in talking to people right now. That’s why it’s nice when people hire me because they have a hand to hold and somebody in their corner,” she said.

After Laurie sends a client on a date, she solicits feedback to help them make a better impression the next time around. If clients are doing things that aren’t resonating with their date, she lets them know so they can tweak their dating style.

Clients appreciate Laurie’s direct, no-nonsense approach to matchmaking. Laurie was raised in Philadelphia and moved to the South, where she has lived for many years. The combination of those two regional communication styles gives her an attitude that resonates with clients.

“I understand how to talk to people wherever they are. That’s one of my greatest skills,” she said.

Laurie shared one of her favorite success stories about a man who hired her as a dating coach and a woman who hired her as a matchmaker. Laurie used her intuition to match and introduce them — and they hit it off right away. Eventually, they got married, and the couple is now expecting a child.

“I love them because they learned how to communicate with each other really effectively. Pretty early on, they brought up some of those tough topics that sometimes people wait on. Because they did that, they got to a deeper part of their love faster than I think many couples do,” Laurie told us.

Laurie describes herself as an intuitive person, which is evident in her role as a dating coach.

“I believe the clearer you are about what you want in life, the easier you will attract it,” Laurie told us. “People say that the clarity that they got from meeting with me has helped them. I’ve had multiple people meet with me and then meet somebody immediately.”

Some clients book sessions with Laurie when needed, while others meet with her weekly, typically via Zoom. Others enroll in her three-month online dating coaching program. The program is aimed at women in their 20s through their 60s and has been quite successful.

Laurie shared the story of how she helped one woman struggling with her body image.

“She couldn’t attract what she was looking for because she wasn’t happy with her body. I told her, ‘Don’t let that stop you.’ People of all shapes and sizes, colors, and religions find love and are happy. And sure enough, she worked through whatever she needed to work through and is now married with a baby,” Laurie said.

Laurie offers her clients plenty of advice and strategies to increase their dating success.

First, she said they need to know themselves and develop interests outside of work. If all clients do is get up and go to work, then return home to sit on the couch and watch Netflix, they need to do more.

The alternative is pursuing interests and devoting themselves to a hobby or two. That will improve their lives and provide them with something to talk about on dates.

She also suggests that singles get into creation mode.

Laurie Berzack: Encouraging Singles to Get in the Game

After 16 years in the business, Laurie has gained considerable insight into how singles can find the one. And she’s working on  launching a new podcast to share that knowledge with a broader audience.

“I just want to bring some peace to people around dating and about the obstacles they’re experiencing in life. My goal for the podcast is to bring hope to people,” she told us. “I hope our listeners can link the topics to their own lives.”

Laurie said she wants the podcast, which she aims to launch in June, to be fun and upbeat. With all the sadness in the world, she wants singles to realize there’s love in the world for them.

Additionally, Laurie is interested in increasing her social media presence, perhaps by starting TikTok and YouTube. Laurie said she is also working on a book.

Reflecting on her career, Laurie said she is happy to use her empathetic nature to help people. She feels she understands her clients and knows what they need to hear to prepare themselves for love.

“I think that’s the gift I’ve been given in this lifetime. I’m grateful for it, and it lets me help people. It’s very worthwhile work. It feels very mission-oriented to me,” Laurie said.