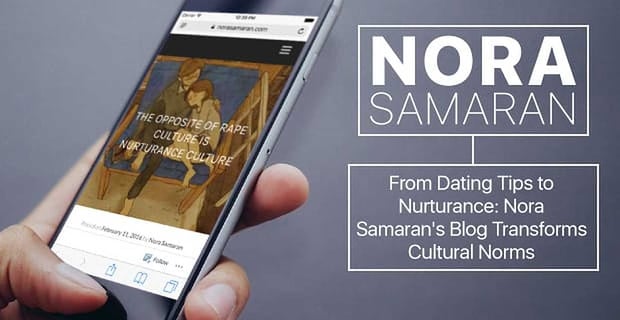 The Short Version: In 2013, Nora Samaran started a blog called Dating Tips for the Feminist Man as a joke. She was experiencing confusion and harm as a woman in the dating scene and wanted to address the assumptions she encountered among men who claimed to be feminists in public while acting in unconsciously patriarchal and even harmful ways in their private relationships. While working as a literature professor at a community college, she began blogging as a way to relax in between working on academic articles. Her thoughtful analysis quickly gained traction, and she soon found herself brainstorming, questioning, and conversing with thousands of people in 189 countries. Today, Nora is a leading feminist blogger best known for her articles about strengthening a nurturance culture to counter rape culture. Men can use her blog as a resource to understand and respect people of all genders in the 21st century dating scene.

When a Wisconsin-born pharmacist on OkCupid asked if he could treat me to dinner, I quickly scanned his dating profile to make sure I didn’t see any red flags. A particular personal question gave me pause. The question asked “Do you think mansplaining is a thing?” He’d said no and clarified: “You’re either right or wrong, and gender has nothing to do with it.”

Something inside me recoils at the dismissive arrogance of that response. I can’t argue with the statement itself, but.. that’s not what mansplaining is. It’s not about the guy being wrong. It’s about him devaluing or underestimating the knowledge and power of women.

“The phenomenon of the mansplain… [is] a result of the lifetime of pressure that molds men to fake it, to sound like they know things they do not know… and disregard women rather than perceiving us, simply, as we are.” — Nora Samaran, feminist blogger and theorist

Still, I thought his mansplaining ignorance was probably harmless, so I agreed to the date. Huge mistake. I was seething by the end of the night and biting back retorts like “Yep, I know George R.R. Martin is old — I just told you I loved his books” and “Yeah, I’m aware of Hillary’s 35,000 deleted emails — I majored in political science and lived on the planet in 2016.” I felt like I had front-row seats to a highlight reel of white male privilege.

Sometimes dating evokes feminist issues and brings out gender stereotypes in the worst way. It’s important for today’s daters, especially in the current political climate, to take these issues into consideration if they want to act in caring and constructive ways with a potential match. After all, the first step to solving a problem is to acknowledge that, yes, mansplaining is most definitely a thing.

If you want to learn more about the influence of gender norms on dating and relationships, you can peruse Dating Tips for the Feminist Man to gain valuable insight into this hot topic.

On her blog, Nora Samaran lends her perspective as cultural theorist, college professor, and geeky feminist. She delves into emotional topics such as physical and psychological abuse, social justice, attachment theory, sex, and systematic harm, such as in patriarchy or white supremacy. Her engaging articles deftly explore the psychological undercurrents that shape gendered beliefs and behaviors in today’s relationships.

“Many of us are so trained to accept being treated in reckless, un-empathetic, entitled, and irresponsible ways,” Nora wrote on her About page, “and these are actually not OK at all.”

How an Internal Dialogue Became a Viral Sensation

In 2013, Nora began the Dating Tips for the Feminist Man blog never imagining how it would take off. She didn’t want to start a movement or become a feminist leader — she just wanted to get a few things off her chest.

While working as a lit professor, Nora Samaran became a prominent blogger on feminist issues.

Nora flew through her first post, pouring out her thoughts in eight minutes flat. She didn’t think anyone would read it. She was just writing to herself online, organizing her thoughts while working on more serious academic articles. Never in her wildest dreams did she imagine her blog would go viral.

But within hours, the blog caught on. “I went from no readers at all to, suddenly, thousands,” she recalled years later. “It was all quite enjoyable, if puzzling.”

These issues remain painfully relevant, and Nora’s blog offers a meaningful contribution to the discussion of how feminist men can foster change in their own relationships and in the world at large.

Just before Valentine’s Day in 2016, Nora wrote an exhaustive essay about what the opposite of violence is — and how caring men can become part of the solution in today’s rape culture. Her ideas rang true with many readers who furthered the discussion by commenting and sharing in large numbers. “The Opposite of Rape Culture is Nurturance Culture” saw 300,000 views in one week. Today, the article has been read by over a million people in 189 countries.

“Holy cow,” Nora wrote on Twitter. “This touched something that is resonating around the world.”

By explaining how attachment theory related to the unstable and violent actions of men, Nora presented a case for fostering less insecurity and vulnerability in society by nurturing secure emotional bonds from a young age.

“The solution to this is not to pile on more shame and guilt,” she wrote. “The solution is a complete transformation of social relations to allow wholeness back into our world.”

Nora’s article on nurturance culture is a vehicle of discussion for compassionate people of all genders.

Ultimately, Nora hopes to contribute to the creation of communities of care that nurture stability, trust, and love without bounds. Her viral and thought-provoking articles raise awareness about the everyday actions individuals can take to support feminist ideals in meaningful ways.

“Compassion for self and compassion for others grow together and are connected,” Nora argued. “We must call on masculinity to become whole and nurturing of self and others, to recognize that attachment needs are healthy and normal.”

Nora likes to facilitate conversation and encourage vulnerability and genuine connection among people, so she often calls upon her readers, colleagues, and friends to give their opinions about her opinions. Something that sets the Dating Tips for the Feminist Man blog apart is the fact that Nora writes all of her pieces in ongoing conversation with friends, trusted colleagues, and readers. By making her creative process visible, facilitating ongoing interaction with readers, and reflecting on her own life experiences, she develops a cultural analysis that is alive and resonant.

Male readers who sometimes expose their own defensiveness in response to her writing intentionally or unintentionally reveal the cracks and fissures in Western culture, and that leads to stronger articles.

In 2017, Nora expanded this practice to include her lectures, posting a presentation she was going to give at Simon Fraser University to let it resonate with her international audience as she composed it. By giving her articles room to grow and change, she’s able to put into language experiences that often have no easy words. Each post is like a statue slowly shaking itself out of the sand.

Nora’s rewards are the many conversations that have grown out of the articles as well as the open-hearted, caring messages she receives every day from people of all genders who find the articles helpful in making sense of their own unspoken experiences.

“Actively taking on the identity of a feminist man means you are equally responsible to do your own research and actively notice these things.” — Nora Samaran

“I think of the rough posts as a kind of sonar that echoes out and sends things bouncing back,” she wrote. “The final posts are never complete, but are in a continual state of growing and transformation — in other words, they are alive.”

Nora facilitates conversation about issues of gender in contemporary relationships. Her blog sees a high level of engagement in the comments section, as people share stories, give critiques, and flesh out the ideas Nora professes. “Thank you for sharing this,” commented AtroposOfNothing on an article about consent. “It’s saying things I have struggled to articulate for a long, long time.”

“Thank you for this brilliant article,” Michael Vernon wrote. “It is incredibly inspiring to have your words connect so deeply with my heart.”

I’ve never considered myself much of a feminist, but when I was confronted by a condescending pharmacist — who paid lip-service to gender equality but undermined it in his actions and assumptions — I felt like refusing the free meal and burning my bra in front of him.

I’m sure he didn’t mean to make me so angry. He was big on Midwestern values and gentlemanly flourishes, and he’d probably say he can’t get a girlfriend because he’s too nice. He’d say he just got carried away on our date. I’d say he should read Nora Samaran’s blog for feminist men and get a clue.

With thoughtful analysis, Nora dissects the harmful gendered paradigms that lead to dysfunctional interpersonal relations, psychological harm, and sometimes physical violence. Her approach is always action-oriented and offers impactful solutions to the pernicious problems faced by singles and couples around the world.

“We all live in context,” Nora wrote in “We Need Allies Not Gentlemen” in 2016. “Thinking through how to be a genuine force for positive change is going to take changing the fundamental paradigms with which we relate to one another.”