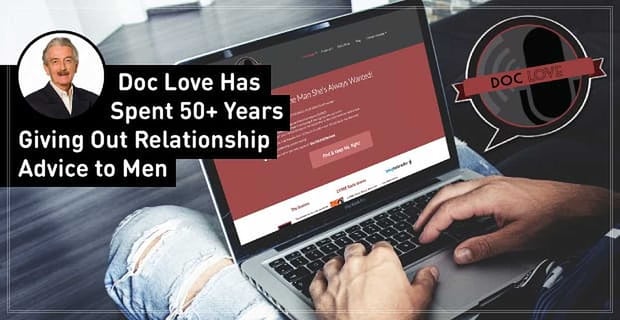 How to Keep Love Alive: Doc Love Has 50+ Years of Experience Giving Relationship Advice to Men

The Short Version: Doc Love, a relationship coach with over five decades of experience, advises men on what to do (and what not to do) to keep a woman in love for years to come. He came up with “The System” and “The Mastery Series” to teach men how to live out the saying “Happy wife, happy life.” His training resources go beyond simply getting a date and tackle the more long-term concern of satisfying your partner throughout your relationship. In his radio show, podcast, book, and blog, he recommends good manners, respectful attitudes, and constant affection as the keys to a woman’s heart.

In 2011, a Texas single named Blake had confidence, good looks, and a Golden Retriever, but what he didn’t have was someone to share his life with. To jump-start his love life, he bought a book called “The System,” written by one of his favorite bloggers and radio hosts, Doc Love.

“After years of failed relationships, heartbreak, wasted time, money, and emotion, I put my ego aside and realized I needed real help,” Blake said. “Your book and radio shows changed my life.”

The System taught him self-control, so when he met a gorgeous girl at the young adult group at his church, he knew how to approach her. He asked her for her number, waited seven days, and then asked her out. Rather than barrage her with texts between dates, he gave her space and added some mystery to the relationship.

Taking his time and showing restraint, he didn’t say the “L-word” until he proposed to her, earning her respect and devotion.

Relationship coach Doc Love receives dozens of these “you changed my life” letters each month. When we spoke with him, he brought up these pages of success stories with pride. “This is what I do for guys,” he said. “I train them to approach and handle relationships properly to keep a woman in love with them.”

Since 1965, Doc Love Has Studied Why Women Leave Relationships

At my brother’s wedding, my dad stood up to dole out some sage advice. He thoughtfully summed up his own 35 years of marriage experience with a perceived cliché phrase: “Happy wife, happy life.” Some chuckles arose in the room, but my dad didn’t waver. “That’s the key, son. You’ll see.”

On the surface, my dad’s words sounded like an antiquated notion. However, it turns out there’s research supporting the idea that the wife’s happiness is more instrumental to the husband’s happiness than the other way around.

“The woman sets the tone in the home,” said Doc Love, a relationship expert who’s been working with men since 1965 and has seen this phenomenon firsthand. “If the mother is happy, the kids are happy, the dog is happy, and the husband is happy.”

Thirty-five years ago, he began specifically looking into why women divorced men. He wanted to know if there was some big mistake these guys were making. After interviewing more than 10,000 women about their wants and needs, he saw a pattern emerging.

“Most men are clueless,” he told us. “They don’t know what to say or what not to say.”

In January 2000, he began writing a blog that posts every Wednesday to remind men not to take their wives for granted. Doc Love is dedicated in his mission — in over 16 years of blogging, he’s never missed a Wednesday.

From Getting Her Number to Avoiding Divorce: The System™ Tells Men the Way to Please a Soul Mate

Doc Love is troubled by a dating culture that leads to women initiating 70% of the divorces in the U.S. He set himself the ambitious task of turning these numbers around by educating men on how to maintain committed relationships throughout the years.

“I’m an inventor of what’s called ‘The System,'” he said, “which teaches men what to do right. If a guy does everything right, she’ll keep him around.”

Whether it’s picking up signals, appearing confident without bragging, or discovering her true agenda, Doc Love emphasizes the correct behavior for securing a long-term relationship. “The System” is available as a hardcover book, ebook, and audiobook, plus readers get an Interview CD and Speech CD included for free.

“The System” outlines desirable traits as well as red flags to be on the lookout for on any date.

Although “The System” only costs $99, the Doc guarantees readers will think it’s worth a hundred times that amount — or they can send it back for a full refund. He said his book has a less a 1% return rate.

“In a short time, I have learned so much,” said Phil, a loyal follower of Doc Love’s teachings, “and I know that having Doc as my teacher and friend will only mean even further growth for my future years to come.”

Doc Love enjoys hearing about the transformations of men who use The System. He sees his role as a corrector of dating and marriage mistakes. “Many men don’t know how to approach relationships and handle them properly,” he told us. “You have to constantly give your wife affection and romance, just a little bit each day, to let her know you really value her.”

His Radio Show Encourages Studying the Mind of Your Date

Doc Love’s Dating Women Radio Show answers real men’s questions about dating and relationships. Callers seek tips on everything from how to offer to pay for a date to how to please a significant other. Using the radio show to back up his materials, Doc Love tells his listeners straight up what they’re doing right or wrong.

He gave an example of a simple gesture that can go a long way. While your partner is washing the dishes, go up to her and kiss her, saying, “Honey, you’re the most beautiful dishwasher in the world.” (And maybe you could offer to finish up the dishes while you’re at it!) Taking the time to show you care is really going to make a difference in your relationship.

“If she falls out of love, it’s never the woman’s fault,” Doc Love told us. “Romantic love is conditional, so you’ve got to keep her happy.”

He tackles a wide variety of serious subjects on his show. One of his most popular radio segments condemned domestic abuse after a caller asked about hitting a woman because she cheated on him. You can catch an excerpt of Doc Love’s response below:

Doc Love knows the importance of picking Ms. Right and then treating her right. His G-rated radio show pushes men to become their best selves so they’re deserving of a woman’s love.

“You can’t keep her on looks alone,” he said. “You must have personality too.”

His advice helps men with all aspects of their lives. Scott, age 59, wrote to Doc Love to thank him for giving him the motivation to stop drinking, lose 40 pounds, and attract the love of his life. “Your advice is on point,” he wrote. “Now I’ve been happily married for three years, and my wife and I listen in to your radio show together. Thanks!”

For over 50 years, Doc Love has clearly communicated what men can do to make a relationship endure for a lifetime of happiness. “When you get married, that’s just the beginning,” he said with a chuckle.

Throughout his long career, Doc Love has heard many touching stories from listeners and readers like Blake who are committed to being the best husband they can be. The men who write in often say they’ve followed the Doc’s advice — whether on his blog, podcast, radio show, or book — and have maintained healthy relationships because of it.

Doc Love hopes to inspire many more life-changing stories as he continues spreading his message of love, respect, and devotion to men everywhere.

“Give her manners, show class, keep the conversation uplifting and positive,” he said, “and over the long haul, you’re going to get back respect, affection, and romance.”