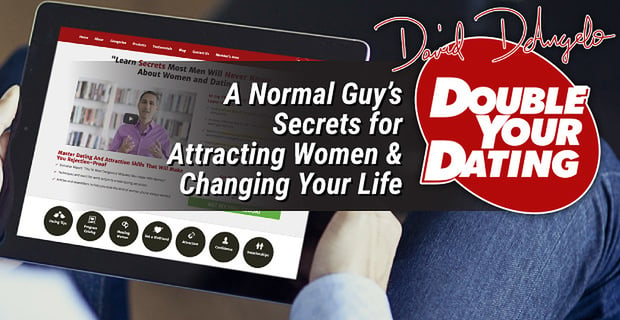 The Short Version: David DeAngelo is your average guy who’s figured out what genuinely works with women — no tricks, no games, no manipulation. Relatable and honest, David shares his everyday secrets with millions of single men through a series of helpful books, programs, articles, and videos on DoubleYourDating.com.

A lot of dating experts make outrageous claims — like they’ve been good with women since before they could even talk — but not David DeAngelo. He doesn’t pretend to have all the answers or make promises he can’t keep. David is just a normal guy from Oregon who’s worked hard to learn how to meet women, get a date, and create lasting attraction.

“The things I was learning from books and seminars… a lot of it didn’t feel right to me,” he said. “By hanging out with guys who intuitively got the attraction game, watching what they did, modeling them, and understanding their beliefs and how they saw the world — that was how I figured it out. I started to see patterns that no one else was talking about anywhere else.”

David’s newfound knowledge and desire to help millions of lonely single men is what inspired him to create Double Your Dating LLC. We spoke with David to learn more about his process of sharing tips based on his experiences, including how to approach women, avoid rejection, read body language, and build relationships.

Books, Programs & Videos Provide a Variety of Ways to Learn

David isn’t your typical dating coach who’ll reel you in and then hide the best secrets. He’s open about what he knows and sharing that with you.

He focuses on 6 main concepts — Dating Tips, Meeting Women, Getting a Girlfriend, Attraction, Confidence, and Relationships — and provides numerous ways for men to learn about each. Besides affordable books and programs, there are also several free resources, including articles like “8 Simple Rules for Texting a Woman,” videos like “Being a Mature, Secure Man,” and a newsletter that gives you access to even more in-depth advice and exclusive offers.

David DeAngelo offers tons of free advice about meeting women and getting a girlfriend.

These are great places to start for men who’ve grown tired of being single and are ready to make major changes in their dating lives. Below we’ll discuss some of David’s essential products and his unique style.

“Double Your Dating”: Starting You Off on the Right Foot

David’s first dating book, “Double Your Dating,” lays the foundation of his teachings and walks you through specific actions you can take to have more success with women.

“Double Your Dating” calls out all the bad dating tips men usually learn while growing up.

The best part is these tips have nothing to do with being handsome, rich, or any of those other stereotypes about what women want. These are all things every guy can implement into his daily life and that really matter to women.

“Double Your Dating” goes against what most men learned about dating, romance, sex, and love when they were younger and calls out how strategies like canned pickup lines don’t work. There’s more to it than people realize, according to David.

“There are more subtle aspects that once you understand them, it’s like putting on 3D glasses when you go to a movie — all of a sudden everything appears differently,” he said.

“Advanced Dating Techniques”: Your Boot Camp for Taking the Next Step

David said the biggest takeaway from this program is that you’ll get to explore the deepest assumptions men have about how to behave with women — namely, thinking that attraction is a choice, when millions of years of biological wiring says differently.

“Advanced Dating Techniques” takes you through a digital boot camp that will transform your love life.

“We do all these things to try to convince a woman to like us: giving her compliments, buying her gifts, saying nice things about her, trying to show our positive side, trying to contrast ourselves with the kind of guys she’s attracted to,” he said. “This stuff never works, and the reason why is, when it comes to this aspect of reality, she’s not choosing.”

He added that attraction is more of an automatic process, something that happens subconsciously when we see someone who meets our internal set of criteria, and we only consciously realize it later. We intuitively know how to flirt and trigger attraction and chemistry — we just need to learn how to access that upfront.

“We know how to take steps from one to the next — from starting a conversation to building rapport to getting the date to kissing. We need to learn how to get in touch with the parts of us that are already there, mostly just lying dormant,” David said.

“Our entire world can change with women. Literally our lives could be totally transformed because we can walk through the world with a confidence that we know how to do something that before we thought was magic,” he added.

A Best Friend Mindset: How You Know You Can Trust David’s Advice

Even as a kid David knew he wasn’t a natural with women. He’s had to work at it, which has made him humble.

“No matter how much I hung out with these guys and deconstructed what they were doing and reverse engineered all their techniques and practiced, I could never get even close to how good someone who’s just naturally good at it is,” he said.

David understands that he doesn’t know it all, and talking as if he does isn’t the way to help men absorb what he’s saying. He’s spent a lot of time thinking about how people learn and interpret information, and he uses his successes and failures with women to talk to men the same way he would his best friend. The value of offering advice in this way is that people know you’re genuine.

“I happened to get the gift of being a good explainer, and I’m taking things I’ve learned from a lot of other people, synthesizing it, and then adding that little 20% of flair that I figured out myself by looking at patterns,” he said.

From Dating to Relationships to Families: David’s Teaching Evolution

Growing up as a young kid in Oregon, David didn’t know how to talk to girls and didn’t get his first girlfriend until he was 18. While he had a few relationships in his early 20s, it was during his late 20s that he had a wake-up call. He needed to figure this dating thing out, so he started reading books, going to seminars, and hanging out with guys who seemed to have a knack with women.

Decades later, David now receives hundreds of thank-you letters and gifts. People even stop him on the street and at airports to say that he’s changed their lives.

“A lot of them were at dark, dismal places in their lives where they had given up, and then they found this material and used it and got a girlfriend, got a wife, started having a family,” he said.

“This book should be required reading for all men before they’re allowed to talk to women. The more I use the attitude and tips that you wrote in your book, the more women respond to me. It’s amazing. Who knew that you could actually learn to be more successful with women from a book? And your two bonus reports are truly amazing. They are probably the most profound insights about meeting women that I’ve ever seen or heard of.” — R.M., San Diego, California

Now married with a young daughter, David is adding to his content to reflect that new step in his life, particularly his latest program, “Love The Final Chapter.”

“You get to see the transformation of guys who are great at dating and have found their partner and are now talking about what to do to make sure that relationship works out,” he said. “I’ve embarked on this deeper study of relationships and intimacy and what to do when you find that magical, special, unique, soul mate-type partner.”

David is like no other dating coach or matchmaker and is making his own unique mark on this industry. We can’t wait to see what he does next.