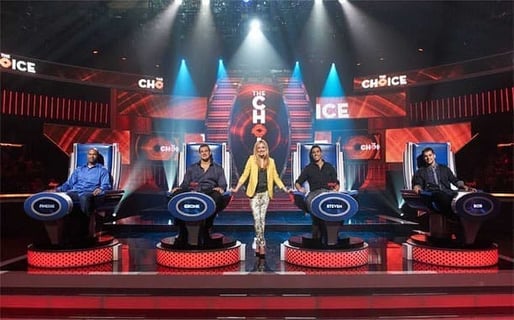 What Does “The Choice” Offer Men?

TV has given us some great philanthropic and heart-warming programs. “Extreme Makeover: Home Edition” builds new homes for families with special needs children or deserving humanitarian families in need. “Shark Tank” brings billionaire investors together with rank-and-file middle Americans with an idea to make it big in a business venture. And “Secret Millionaire” puts millionaires into volunteer roles with charitable service organizations that they end up helping out with a major donation.

At long last, the television industry has found a way to give hope to the neediest of all people in search of dates: wealthy, handsome young celebrity bachelors and smart, gorgeous twenty-something girls who have not yet been able to land a gig as a supermodel or starlet. Thank God for “The Choice,” Thursday nights on Fox.

It’s just a new twist on an old theme. “The Dating Game” started it all in 1965, and since we’ve had a flurry of dating shows including “Love Connection,” “Singled Out,” “The 5th Wheel,” and “The Bachelor.”  Dating lends itself well to the game show environment. Though, the shows don’t often result in the best connections.

“The Choice” borrows heavily from the NBC reality singing competition, “The Voice.” Four celebrity bachelors sit in revolving chairs facing away from the stage. This week we had a musician/actor, a skiing champion, a soap opera hunk, and a “Jersey Shore” alumnus who is now a disc jockey.

The girls come out one at a time and are given 30 seconds to convince the men to turn their chairs around for a chance at a date with them. If more than one bachelor turns, the girl will choose whose team she will be on. Once they have each picked three girls for possible dates, they will eliminate one, and then they will pick their date from the final two.

“Dating selection is still a lot like a meat market, and men can learn

a lot from the choices they see the men make on ‘The Choice.'”

Apparently I am just as shallow as the celebrity bachelors, as I was easily able to forecast who would be the first to go and who would be the ultimate date for each of them. No surprise: cooking and sewing were not the top criteria.

It did win its time slot on Thursday at 9 p.m. EDT with 4.2 million viewers. But it was a premiere with a lot of hype, and it was up against reruns on other networks.  Hostess, Cat Deeley, who also is the master of ceremonies for Fox’s “So You Think You Can Dance,” adds some good humor and charm, and the pretty bachelorettes might keep some people tuned in for a while, too. But it’s hard to say if the glitz will be able to overcome its overdone and vapid premise.

Hopefully, America is tiring of following the escapades of do-nothing celebrities with no definable talent (the Kardashians, Jersey Shore, Real Housewives) and the private lives of the rich and irresponsible, many of whom do have real talent in their professional lives. I’m not sure if viewers will care much if these celebrities and fabulous babes find true love (though we will learn about the dates next week, which will add a new and possibly sentimental dimension to the show.) Still, “The Choice” might teach us something about the way men and women choose their potential lovers.

Physical attraction is a key initial factor in getting a man to focus his attention on a particular girl. When elements of beauty are roughly equal, men do look deeper into the eyes and soul to see if there is someone inside who might capture his heart for a more substantial reason, but they will overlook the inner beauty if her physical appearance doesn’t match up to her competition. How easily we throw out the sweetheart who we could love for a lifetime in favor of the hot babe who we just have to love for an hour.

For some of the bachelors, the prettiest girl was also the sweetest, but the prettiest one was always selected. Dating selection is still a lot like a meat market, and men can learn a lot from the choices they see the men make on “The Choice.” We will surely see brash egos and spoiled brats, who have an endless supply of gorgeous girls to choose from, throw away golden opportunities and trample innocent hearts in the process. But we will also see some true gentlemen be honorable and genuine in the pursuit of a young woman’s heart. Maybe. Tune in Thursday to find out for sure.

What Guys Can Learn From Watching HBO’s “Girls”