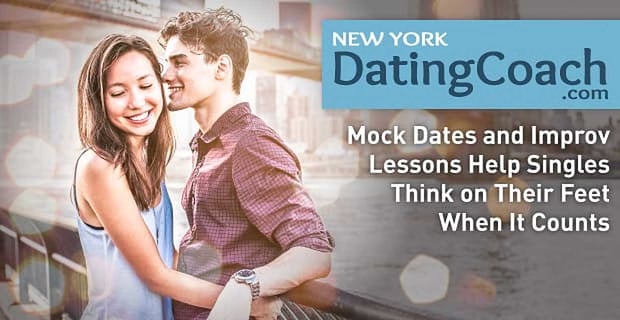 The Short Version: Getting a date is a skill that can be mastered by anyone. With a little practice and the right teacher, any single can learn how to approach dating with confidence and poise. At New York Dating Coach (NYDC), specialized dating experts help singles become their most attractive selves by teaching the skill sets to succeed in an evolving dating environment. While these coaches offer valuable tips on body language, tone of voice, image, and general best practices, the team as a whole is equally invested in self-improvement on a deeper level. Through practice dates and honest feedback, coaches like Hunt Ethridge give clients the tools to land a great date.

Hunt Ethridge was an actor in New York City, living in a dingy apartment, struggling to make ends meet, when he decided that it was time to make a change in his life — he just wasn’t sure what it should be.

During this transitional period, he went to a psychiatrist, who ended up giving him some valuable career advice.

She told him a lot of her male patients were at a loss when it came to dating. She could only do so much to help these men with therapy when what they truly wanted was a woman to spend their time with.

Impressed by Hunt’s breadth of knowledge and experience in the dating scene, she said as soon as he figured out a way to monetize his talents, she’d refer all her patients to him.

“So that was a free resounding endorsement,” he said.

Hunt Ethridge began his own company, Hunt for Advice, to advise singles on how to date.

Hunt took his psychiatrist’s words to heart and began working to make a difference in the lives of singles everywhere. He started his own company, Hunt for Advice. After a couple of years of giving singles constructive tips on this platform, he was brought into the fold at New York Dating Coach. Today, he’s a head coach specializing in daytime dating.

Based in Lower Manhattan, this date coaching firm builds the confidence and social savvy of male and female clients from all backgrounds. With a focus on social skillbuilding, the group consults on a person’s body language, tone of voice, image, and other important aspects of dating.

Hoping to change a dating culture focused on parties and pickup lines, Arthur Malov wrote “Park Bench Dating” in January 2007. This ebook explains how to strike up conversations in public places, like on a park bench. To further assist singles, Arthur then went on to found New York Dating Coach and filled its ranks with dating experts like Hunt.

Every NYDC coach has a different focus, gaining proficiency in a certain aspect of single activity. For Hunt, his area of expertise is daytime dating.

He comes up with techniques to mix and mingle somewhere other than a bar, a party, or online. These aren’t the only places to meet people and get a date. There’s potential for flirtation anywhere a person goes during the day: a bookstore, a grocery store, or a park.

While it may be a more intimidating prospect, it’s just a matter of practice. Hunt has a lot of personal experience and authority in the area of daytime flirting. He excels at bringing out that assertive side of people and opening their minds to the opportunities to form a lasting connection in everyday locales.

Collaborating Experts: The Sum is Greater Than Its Parts

New York Dating Coach looks for excitement, passion, and curiosity in their dating coaches. The personality matters because that’s what keeps a client engaged so that the lesson sinks in. Diversity of background and outlook also matters. For instance, it’s often important for the team to have a balance of genders available so that their advice is backed by firsthand knowledge as a man or a woman.

The dating coaches at New York Dating Coach learn from each other to become better teachers.

Alongside Hunt, experienced coaches like Richard, Antonia, David, Israel, and Jennifer bring a range of perspectives to dating. The coaches work closely together and learn from one another in a highly collaborative atmosphere.

The nighttime coaches, Israel and David, go out to bars and parties to bring people together in a casual setting. There are also image consultants, vocal coaches, and even wing women who accompany clients out on the town.

Surrounded by a diversity of teaching styles and supportive techniques, NYDC clients typically find at least one person to relate to and model behavior after. Almost any single problem can be addressed through the combined efforts of this dating think tank.

“What works for me might not work for you,” Hunt said. “But when you have all these people and their experiences, the client can pick a little of each approach and put it together in a way that’s going to work for them.”

Offering Many Methods and Strategies for Getting a Date

No matter what the client’s experience level, NYDC can address any shortcomings with knowledgeable strategies. Custom advice caters to the strengths and weaknesses of each individual.

Hunt commented that most often it’s the male clients who need the most assistance in how to converse, dress, and relate to women. For the most part, the ladies who come to New York Dating Coach have a fuller understanding of the social niceties.

NYDC helps singles build the skills and confidence to go on a successful date.

A team of experts work to hone a person’s conversation style, image, body language, meet strategy, and tone of voice to increase the odds of forming a real connection with someone.

Through the side-by-side comparison of techniques, a client can best judge what’s best for his or her personal style. New York Dating Coach isn’t about a few quick tips or easy lines, but offering a versatile approach to personal relations that’s confident, engaging, and attractive.

Beyond just getting a date, the coaches at NYDC teach people how to deal with life in general. An acting instructor named Richard teaches clients improvisation, an important technique on a date or any social situation.

“Life is just improv,” Hunt said. “You have to learn to adapt, learn to trust yourself, learn to lose your fear.”

Richard brings in someone to playact the potential date and run through scenarios with the client. That way, the client gets valuable practice for what could happen. The ability to think on your feet and keep conversation engaging is a valuable tool in any dater’s arsenal.

Treating improvisation and flirtation as one and the same, Richard helps unknown actors become famous and awkward conversationalists keep discussion flowing on a date.

Taking improvisation a step farther, New York Dating Coach puts together mock dates to prepare singles for an actual first date. By creating a hypothetical dating scenario and viewing the client’s behavior from a distance, the coaches are able to observe the client’s dating strengths and weaknesses in a more casual way.

A coach or former client plays the role of the date. The two converse while the coaches sit at a table just behind them, out of view, to gain intel.

“When you see them sit down with someone, that’s when you see how they act,” Hunt explained. “You see things that they may be unaware that they do.”

The mock date typically only lasts a half hour. After that, the coaches compile their notes and feedback to offer specific suggestions for improvements that can be made on speech patterns, body language, and other behaviors. The team picks up on important subtleties like not making eye contact or awkward body language.

The mock date is an effective teaching tool for both male and female clients. It’s a quick and easy way for the coaches to assess the assets and obstacles in a particular person’s dating style.

The Measure of Success: Higher Confidence and More Second Dates

These days, getting a first date is easier than ever simply by going online. However, that doesn’t make a person better at getting into a relationship. Overwhelmed by a plethora of options for singles online, some clients turn to a dating coach to offer a more targeted approach.

In recent years, New York Dating Coach has grown to appeal to younger clients in their 20s. These young people understand that dating is a skill to be learned and honed.

Hunt told us that one of his favorite success stories is about a young man from India with a willingness to learn. He came to the U.S. in his early 20s to attend Princeton and found the social scene to be a challenge.

“Coming from another culture, you get culture shock in whatever country you’re in,” Hunt said. “You really just have no idea what’s going and you’re competing against people who grew up around this dating lifestyle their whole life.”

To study up on how dating in the U.S. works, this student enrolled in a dating course with New York Dating Coach. He soaked in the lessons, honing his posture and conversational style, and grew as an individual.

When the student’s father came for a visit, he saw his son as a changed man. Impressed by the way he carried himself with more confidence and maturity, his father told him to go back to take the course again in case there was anything he’d missed the first time around.

“That made me happy that his father saw the man he’d become,” Hunt said.

Such transformations are common at New York Dating Coach, where confidence boosting is just part of the process.

“Rather than teaching me some magic lines and a few techniques, New York Dating Coach focused on my inner self, on how I see myself around women. It made me lose the FEAR of dealing with attractive women” — Jake M., San Diego

From 27-year-old virgins to 40-year-old divorcees, Hunt’s message to all singles is that the world is their oyster. Any errand, any red light, any place you go has the potential for meeting someone. Just strike up a conversation and see what happens.

“It’s really self-betterment through the lens of dating. So we’re making people better than when they walked in,” Hunt said. “That always feels good.”

New York Dating Coach Brings Out the Best in You

No longer an actor struggling to get by, Hunt has become a professional dating coach known for his expertise in advising single men.

Alongside his fellow dating coaches, he employs teaching methods that foster growth and improvement, so that clients not only get more first dates but also more second dates. With the advent of online and mobile dating, getting a first date is easier, but singles may need some extra tutoring to master getting a second date. New York Dating Coach helps singles get to that point.