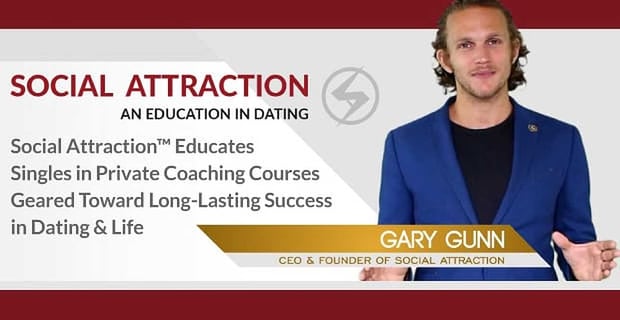 The Short Version: At age 18, Gary Gunn was in a car accident, and his injuries put an end to his dreams of playing professional rugby. During a period of self-discovery, he worked to win back his confidence by approaching and engaging single women in conversation. Over time, he overcame his fear of failure and developed impressive interpersonal skills. Other men took notice and asked for his secret, and that’s how he got into dating coaching. Gary founded Social Attraction, a UK-based dating coaching service, to give single men the support and resources he’d needed as a young dater recovering from trauma. Today, Social Attraction’s in-depth training sessions help clients all over the world address their insecurities, cultivate better dating habits, and get fast results in the modern dating scene.

Gary Gunn grew up with a natural athletic ability, and his speed won him success and adoration on the rugby field. At age 18, he felt on top of the world. His teammates looked up to him, and he was primed to become a professional rugby player. Plus, England’s rugby team had just won the World Cup Final.

The future looked bright for Gary. Then his car slammed into a four-by-four truck, and, when the dust settled, he knew he would never be the same. Gary sustained severe nerve damage in his neck and spine, which meant he had to quit rugby and find another direction for his life.

In the months following his accident, Gary told us he faced a crisis of confidence because he felt that his friendships, goals, and charm all stemmed from his athleticism. Without that, Gary wasn’t sure who he was or what he could do. He put on weight, became anxious in social situations, and began searching for a way to regain his footing and move forward.

“It was a long journey back to take control of my life,” he said. “At that time, I was really crying out for coaching or a company that could help me — and there wasn’t any.”

Determined to change, Gary trained himself for the dating world in the same way he’d train for a big game. He worked on his techniques, never gave up, and improved the more he practiced chatting people up. Over time, he became so successful at flirting that he decided to start a professional coaching business to teach men how to woo a complete stranger and make a date on the spot.

Today, Social Attraction hosts impactful and inspirational courses across the UK and Europe. In 2017, the team expanded across the pond and launched programs in New York City, Rio De Janeiro, and Los Angeles.

Social Attraction is among the UK’s premier coaching services for men, and Gary works closely with singles who want to develop savvy dating skills. His team’s personalized training sessions and consultations offer results-driven assistance in a variety of dating scenarios.

“My guiding principle now is to set up everything that would’ve helped me in that time after my car accident,” he explained. “It’s not just about coaching people for one day; it’s about having a lifetime impact, so it’s important to remember why we’re doing this.”

Gary Gunn’s coaching business emphasizes real-world exercises and actionable advice. Social Attraction provides a range of live training sessions tailored to the needs of single men in the UK. The individualized courses walk men through the nuances of the dating dance from making an approach to getting her digits.

The One-Day Intensive Course teaches dating strategies in a safe and controlled environment, starting with a learning segment about cultivating an air of confidence and finishing with interactive practice sessions in real-life scenarios. Many successful former clients return to offer advice and join the new clients in an outing to put the lessons they’ve learned into action.

“The support you get on the course is a thousand times more than you’d ever expect,” praised Peter Gunary, a satisfied course participant.

If you’re looking for even more practice and one-on-one guidance, the company’s award-winning Three-Day Course could be for you. In three six-hour days, Gary’s team condenses everything they know about flirtation, attraction, body language, and online dating. Skilled conversationalists demonstrate masterful dating techniques guaranteed to win women over. After they’ve outlined their key principles, the coaches take clients out onto the streets, to bars and art galleries, where they can start chatting people up and building confidence.

In recent weeks, Social Attraction has begun promoting the 30-Day Challenge to give clients an affordable alternative to intensive courses. Each day for a month, the coaches email participants simple and specific dating challenges to motivate them to flirt with women and make a strong first impression. Those men who stick to the program and complete each challenge earn lifetime access to Social Attraction’s resources.

One of Gary’s most important rules for successful dating is not to voice negativity or talk down about yourself to a date prospect. The dating expert wants to build men up and show them a positive path for their lives. In the coming months, Social Attraction will launch a 60-Day Self-Development Challenge to inspire clients to get in the right mindset so they can meet the right person.

“What we tend to do is look at our clients’ bad habits and instill new and better habits,” he said. “We’re basically helping people overcome fears of rejection and failure — which is transferable to other areas of life as well.”

Gary’s goal is to give singles access to proven dating strategies so anyone can feel confident chatting up date prospects and cultivating relationships. Recently, he co-wrote a self-help book called “An Education In Online Dating: The Online Dating Guide For The Modern Man In The Cyber Century” to focus on the obstacles and opportunities faced by online daters everywhere.

Gary wrote a book to help the modern man attract a date online.

This step-by-step dating guide discusses how to set up an attractive profile, send appealing messages, and garner positive attention on any dating site or app. The books email template system provides a simple three-step plan to increase your odds of getting a response from your crush.

One Amazon reviewer who calls himself Foxman said he changed his dating profile according to the book’s guidelines and received messages from two women within 10 minutes, which had never happened to him before. He raved that the book’s advice was brilliant and “changed the whole way I looked at online dating.”

“Following the instructions in this book was really easy, and, after only a few days, I’ve noticed a big improvement,” wrote Simon T. in a four-star review. “I actually feel like I know what I’m doing with online dating now.”

Gary’s thoughtful prose encourages online daters to be authentic and assertive when making dates online. If you want to avoid the classic blunders and set yourself up for romantic success, this book is a must-read.

Over the years, Social Attraction has had a deeply personal impact on many men throughout the UK, but Gary said his proudest moments came when his clients fulfilled their dating potential and then actually became part of the coaching team.

Dr. Neel Reddy got in contact with Gary after reading an article he wrote in the paper. Neel was one of the trauma doctors who had saved Gary’s life after his car crash, and now the doctor wanted to enroll in his former patient’s coaching services.

In an unexpected turn of events, Gary got the chance to repay his doctor by helping him on his journey of self-exploration. The two men became good friends as they worked together. Eventually, Neel decided to pursue his interest in fashion by becoming a fashion consultant for Social Attraction. “It’s surreal how it happened,” Gary said. “That’s one of my favorite stories.”

Dr. Neel Reddy teaches single men to develop a sense of style and look their best on dates.

Paul Collins is another example of a coaching client who became a dating professional after working with Gary. Paul had experienced a setback in his career and had split up with his wife when he came to Gary for guidance. After a few months of coaching, Paul got back together with his wife, and they’re now happily married and raising a baby boy.

Shortly after his coaching sessions were over, Paul joined the Social Attraction team as Head of Operations. Gary told us that Paul is an effective manager because he’s passionate about the company’s mission and has experienced the coaching services from the client side. He can testify to the transformational power of Gary’s coaching programs — because he’s lived it.

Gary loves empowering men to take control of their lives and pay it forward in their work. “I’m just grateful to be part of the process. Seeing someone overcome something that’s challenged them for years is just spectacular,” he told us. “When people get in contact with me to say they’re married, there’s no better feeling than that.”

Social Attraction: A Paradigm Shift for Daters in Crisis

Gary thought he had it all going on as a teenager, but, after his car accident, he found himself having to rebuild his self-esteem one conversation at a time. What began as a crisis of confidence became an opportunity for growth as Gary developed strong communication skills and started to take pride in his ability to score points with women rather than on the rugby field.

After years of perfecting his flirtation strategies, Gary now has the experience to educate men about what it takes to land a date in the modern world. Social Attraction offers personalized training sessions packed with comprehensive lesson plans and real-world exercises that reinvigorate single men in the search for a short-term date or a lifetime love.

Looking ahead, Gary told us he’s interested in taking his coaching to corporate settings to teach people to develop healthy relationships in the workplace. The seasoned dating expert sees a growing need for education and awareness in this space, and he’s eager to lend his interpersonal insights to a wider audience.

“You don’t realize when you start coaching how big an impact it can have,” he said. “We’re impacting the lives of the people we’re coaching and everyone they communicate with from that point on. So that’s really empowering for me.”