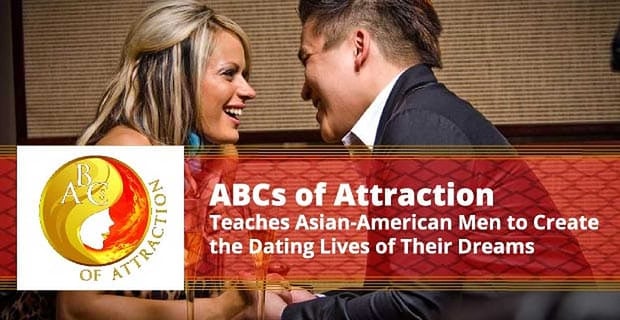 The Short Version: JT Tran, better known as “USA’s #1 Asian Dating Coach,” understands what it’s like to be an overlooked Asian-American dater. For years, he worked to overcome his own dating dilemmas, some of which had been ingrained by perceived attitudes toward Asian men. To help others like him, JT developed ABCs of Attraction, dating bootcamps for men seeking to boost their confidence and successfully court women through authenticity. He teaches daters strategies for changing their thoughts, actions, and communication — the three levels of the dating game. JT wants to create confident Asian-American role models who can, in turn, inspire younger men to take pride in themselves and their heritage.

It’s no secret that some singles have an easier time navigating online dating platforms, but one ugly secret that can make a dater less desirable? His race.

“When it comes to online dating, Asian men are at the bottom,” said JT Tran, founder of the ABCs of Attraction. “If I want the same response rate as a white man, I need to make $247,000 more than him. Basically, that means my profile picture has to include a Bentley.”

With that statistic in mind, JT recognized that Asian male daters needed more effective methods to attract the women they desired. Sometimes, those daters didn’t have the tools to attract the same women that men from other backgrounds can.

That’s why JT holds ABCs of Attraction bootcamps and week-long training courses that help primarily Asian daters overcome confidence issues and foibles. After the training, participants can employ strategies that will make them stand out more — both online and in-person.

The bootcamps are typically geared toward Asian and Asian-American men, who face a specific set of challenges while dating in the United States.

Most participants are in their 20s or 30s and are career-driven men who were taught that, if they had good jobs, nice houses, and flashy cars, they would attract girlfriends or wives.

However, some of these professionals aren’t skilled in the areas it takes to find the right woman.

“They’re guys who are successful, but they’re only great boyfriends on paper. They’ve never worked on socializing or dating skills,” JT said.

Over the three-day bootcamp, attendees learn strategies for successful dating. Before they meet any women, participants attend lectures, drills, and practices that prepare them for typical dating atmospheres — like bars or clubs. They learn how to tweak their body language, approach women, and make small talk.

After sessions, participants go out into the dating field for practice — both during the day and at night.

“We put them out into the water and see if they can swim,” JT said.

The ABCs of Attraction bootcamp covers the three major factors in successfully courting and wooing a woman: thinking highly of yourself, acting powerfully, and speaking confidently.

There are multiple levels of each of the three strategies, which JT describes as inner game, outer game, and verbal game. Considering one’s inner game means grappling with issues that may have arisen from trauma or internalized racism. Outer game and verbal game deal with strategies for meeting and speaking with women.

Participants have different starting points for each of these three levels when they begin the bootcamp — depending on their mindset coming in.

“Students come in at different levels. I’ve had bootcamps where not a single student spoke English as a first language,” said JT. “Or I’ll have Asian-Americans who are tall and attractive, but because they’re raised here, they believe they’re second-class social citizens.”

During bootcamps, participants take their skills out into the field to learn more about their game.

If daters want a more extended period to practice the three strategies, they can enroll in a Euro Program or a Vegas Program. These programs focus even more on inner game.

“We do all inner game, delving into our internalized racism, releasing trauma and triggering events,” said JT. “Many men end up just crying out their issues and becoming stronger men in facing their fears.”

JT is confident in his program because he has seen the effects as he developed the strategies. Like the Asian-American men he mentors, JT knew very little about romance or how to spot it. He didn’t even know his college girlfriend liked him until she was very blunt about her feelings.

After that relationship ended, though, JT was back in the weeds. He failed at online dating and speed dating, so he sought out ways that he could become a better dater. As a former rocket scientist, JT was confident that he could crack the dating code.

Offering Hope for a Romantic Future

After studying psychology, communications, and pick-up strategies, JT’s dating success rapidly increased, but he was still surprised that he could learn to date the same way that he learned other subjects.

“It was a revelation to me that it was something you could learn,” JT said. “I thought there was no hope for you if you didn’t already have it.”

JT didn’t want to keep these dating secrets to himself, so he presented these strategies to other daters on his blog, The Asian Playboy. JT describes the blog as Sex and the City for Asian men. It featured JT’s own triumphs in dating, but also his embarrassments and failures.

From there, the ABCs of Attraction was born.

One of the bootcamp’s success stories is that of William. Even though he was professionally successful, William had trouble attracting women when he went out to clubs with his friends. Though he worked on Wall Street and owned a condo, he was so disappointed that he was considering moving to Taiwan and seeking out a mail-order bride.

“He calculated he went on two dates each year of his life,” said JT. “Not dating two women, going for two coffees.”

After one of his friends convinced William to try the ABCs of Attraction, he began going on dates with the types of women he desired. Soon after, he recognized that he wanted to get married and settle down. And when he did find the woman he wanted to marry, he sought out the man whom he credited for his success.

That is why JT was asked to be the officiant at William’s wedding.

ABCs of Attraction Shows That Self-Love Translates Into Confidence

Because the Asian men who often seek JT’s help are so down on themselves as daters, he suggests his bootcamps do more than help participants find sex partners, but, instead, improve their lives.

“It’s gratifying to go from seeing our clients depressed to being role models to other Asian men, fulfilling that important role,” he said.

ABCs of Attraction doesn’t merely offer attendees a series of dating tips, and the workshops aren’t solely about dating. Instead, the programs are about finding confidence in your heritage and attractiveness.

JT recalls an Asian-Canadian mom who wanted him to help her teenage son who was struggling with dating and confidence issues.

“I knew I had to develop a strategy that would help him grow without turning him into a pickup artist,” he said. “So I developed a holistic system that’s more well-rounded. Something that took into account his background and made him proud of being Asian.”