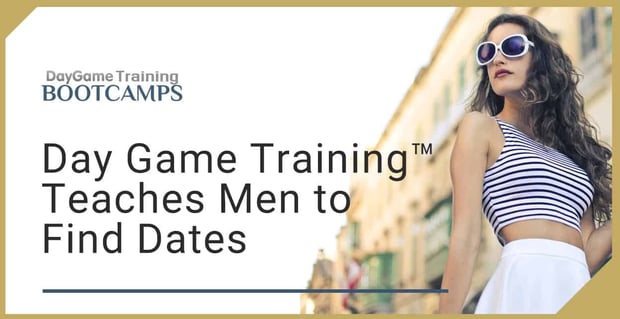 The Short Version: Many single guys want to date the beautiful women they see at the grocery store, the gym, or other public places, but they lack the knowledge or skills to make that connection. Men can struggle with confidence issues or not know what to say as a conversation starter. How do you get a single woman’s attention without coming off as desperate or creepy? That’s one of many dating questions answered by Day Game Training. Dating expert Matt Artisan has developed immersive and interactive dating workshops to support and educate single men around the world. Matt can mentor the average shy guy and teach him how to attract women in the daytime and build confidence.

Matt Artisan, an award-winning dating coach and the founder of Day Game Training, runs workshops for single men who are struggling to meet and attract women. Matt’s expertise in the dating scene comes from years of practice and experience.

Matt Artisan is a skilled dating coach who works with single men.

Years ago, Matt said he thought his only option to meet women was to go to bars and clubs. But those nighttime spots were too loud and dark to facilitate a genuine connection. Plus, he was new to Newport Beach, California, and still developing his social circle. Next he tried online dating, but he wasn’t impressed by the limited options there.

That’s when Matt realized that beautiful women were everywhere: at the grocery store, in line with friends at the movies, or walking a dog down the street. The only problem was he didn’t have the confidence or the skills to engage these women in conversation.

He decided to attend a dating workshop for men in Los Angeles, but he was immediately disappointed. The training was little more than creepy, generic pick-up lines from a pick-up artist. He didn’t want to come across as a jerk, and he also wasn’t sure those lines would work during the sober daylight hours when he wanted to meet women.

Not giving up, Matt later went to another dating workshop — this one geared specifically to daytime dating outside of clubs and bars. The instructor offered the participants 15 different ways to start a conversation, and Matt started testing them out in everyday situations. He memorized the script, and he started getting dates.

“The problem was it was fake, and you’re using someone else’s personality,” Matt said. “That’s where I branched off and started my own thing that was more genuine and direct. It wasn’t using lines. The approach we teach is genuine, how a normal guy would go up to a girl and try to meet her.”

Instead of teaching gimmicks, Matt’s team offers an immersive experience in which single men gain the confidence they need to approach women wherever they may be. Day Game Training offers live, in-person workshops that have already trained men in 43 countries around the world.

Matt said he expanded his company internationally, in part, because he loves to travel. He has led workshops in India, Qatar, Japan, China, and many other places. The men in attendance tend to range in age from 25 to 55, and they often have good careers as engineers, entrepreneurs, and doctors.

Day Game Training puts men in a position to pick up any woman they see in daily life.

Matt’s team consists of both male and female trainers who specialize in different aspects of modern dating. Lynn works in L.A. and dives deep into connecting with women through authentic conversations. Cal, who is based in Canada, specializes in texting, Instagram, and online dating. Josiah and Julia are a couple who work together as daytime date trainers to help men get out of their heads and into relationships.

Some team members bring extensive dating experience to the table, while others have academic backgrounds that help inform training sessions. David is a trainer based in Europe, and he approaches dating from a psychological angle because he earned his master’s degree in psychology. Other trainers have more strategic approaches or offer spiritual insights.

Matt described himself as providing softer and gentler guidance to helping guys figure out their ideal dating strategy.

“It’s very dynamic. It’s like the Avengers, where everyone had different skills and talents,” he said.

Day Game Training offers a variety of boot camps that range from a three-day experience to a 17-day immersion. The 3-Day Natural Attraction Boot Camp is popular because it can be completed in a weekend and teaches guys how to approach a woman in the daytime. Matt said the key is overcoming nervousness, anxiety and fear.

“You should give her a sincere compliment, something you actually think about her, not a weird line or questions you don’t care about,” Matt said. “It’s not about what they say, but how they’re being.”

Of course, most single guys aren’t sure what to look for in a woman’s behavior to know whether it’s appropriate to ask for her number or ask her on a date. So the team brings in beautiful women to role play, and they film the situation so the single guys can see what’s working and what isn’t. The women also provide helpful feedback.

“We run through different drills, not just conversation but tension exercises,” Matt said. “When they go up to a stranger, there will be tension. They need to be calm and comfortable in that awkwardness. Then we go out and approach women.”

The 7-Day Workshop goes beyond the initial approach and tackles issues that arise on dates. It basically picks up where the three-day training ends and gives men the tools to build a strong relationship with the woman of his dreams.

Day Game Training workshops are held in big cities — New York City, Los Angeles, Las Vegas, Phoenix, and Cancun — so the participants can engage in real-time practice at bars, clubs, and shopping areas. The goal is learning how to take things to the next level and succeed where less knowledgeable and less confident guys often fail.

Day Game Training: The Mentorship Program Adds to the Success

Matt said he wants to train men to think differently about dating and where to meet eligible women. Day Game Training is all about being prepared to take advantage of the opportunities that arise naturally.

“It’s not about approaching every girl you see, but it’s more about when you go about your day and see someone who looks interesting. You need to have the confidence to strike up a conversation or ask them out,” he said.

Recently, Matt launched an e-book called “The Secret Language of Attraction,” and he’s already working on an update. Soon, he plans to unveil a new app called Pocket Wingman, which will help guys find potential wingmen to join them in the dating scene.

Day Game Training has plenty of success stories from guys who have gone through the programs. Many write to share that they’ve become engaged or that they feel like they have a superpower because their confidence is so high.

As a bonus, the men who sign up for the three-day workshop will also receive 90 days of personal mentoring. The new coaching program provides action steps for participants to complete every week, and the trainers hold men accountable for their work.

Matt said the follow-up mentoring is an important part of the process because so many guys may feel comfortable approaching women at the workshop but not when they get back to their hometown.

“Our mentorship program is still in its infancy, but guys are getting good results going through the 90-day program, even if they don’t take a workshop,” he said. “All you have to do are the action steps, which really aren’t that difficult.”