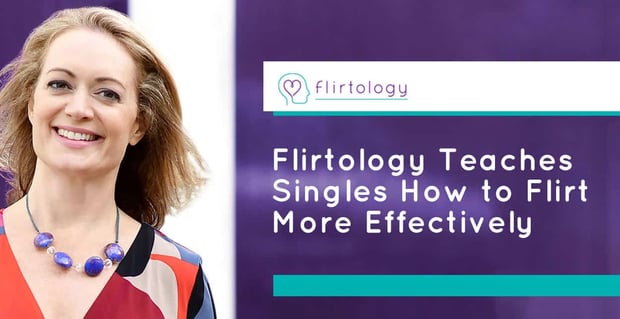 The Short Version: Many singles understand the challenge of flirting successfully on the dating scene. Jean Smith saw that lack of confidence and miscommunication often kept people from flirting with potential partners, so she founded Flirtology. The practice leverages Jean’s cultural and social anthropology background to coach clients about the best — and worst — ways to flirt with someone. She also helps people through her group workshops and book on the subject.

It’s often clear when someone is trying to flirt. Telltale signs include prolonged eye contact, hair flipping, and laughing — perhaps a little more than necessary. Some singles may shoot a series of brief glances or make not-so-funny jokes to show their interest. Daters also should know that when someone is giving them light touches on the arm or leg when talking, that’s probably flirting.

Jean Smith teaches people how to flirt through coaching, workshops, and her book.

However, that’s not the type of flirting that Jean Smith teaches in her Flirtology training courses. Jean grounds her coaching in her experience and knowledge as a cultural and social anthropologist. She shows singles how to express themselves romantically with coaching sessions, group workshops, her thorough book.

Jean, who is currently based in London, has lived all over the world and had to learn how people’s flirting styles varied from country to country — and not all of them are successful.

“In Japan, I was teaching in English. There was a teacher who had to be my translator for male flirting, but it went over my head,” she said. “So I learned the different ways that they were flirting.”

When Jean moved to the West Coast of Ireland, she discovered a completely different form of flirting. There, she said, singles engaged in “cheeky banter” to let someone know they were interested in romance. She also compared each new place to her native United States, where she said flirting was a bit more straightforward.

All of those experiences have helped mold Flirtology into a comprehensive flirting resource that can help singles communicate more effectively when they want to show someone they’re interested.

When Jean moved to London 20 years ago, she became very interested in flirting from a scientific perspective.

“With all these insights, through my travels and my many different jobs, I noticed different patterns,” Jean said. “I noticed that British people don’t really talk to each other, and why was that?”

That’s when she started the research for her master’s dissertation. She studied flirting in cities like London, New York, Paris, and Stockholm to integrate social science research with real-life situations.

The biggest thing she learned was how clichéd and useless much of the dating industry’s flirting advice was.

“Having been in this industry for a really long time, I’ve seen such different offerings. It’s good to want to help people, but a lot of it is perpetuating stereotypes and clichés rather than actual truth,” Jean said. “By doing anthropological research, learning the methodologies, and interviewing people, I think that advice is a lot more useful than, ‘Oh, that’s a good idea, and you should try this.’”

Her clients aren’t just looking for tips on how to catch a special someone’s eye. Often, Jean said, people need advice on understanding what type of behavior is acceptable in the modern dating world and how to freely express themselves to someone they may not know so well.

“If we just felt more comfortable with ourselves and free to do what we wanted to do, we wouldn’t have to learn,” Jean said. “We know these things, and it’s learning how not to be afraid of showing people who we are.”

Jean said that, when governments started issuing stay-at-home orders, she feared that she wouldn’t be able to help singles who were coming to her for flirting advice. But she’s found that the video coaching has been extremely successful.

“It’s so much deeper than flirting, but flirting is a great medium on how to help people,” she said. “When you address flirting, you address issues that make people vulnerable, like rejection, attractiveness, and sexuality.”

None of those things are going away anytime soon, and plenty of singles are still interested in finding romance — even if the process may take a little longer during the COVID-19 pandemic.

“Clients that I’ve had keep booking more sessions. They really like someone to talk things over with,” she said. “It’s not just one area of your life; it’s all areas of your life.”

Jean offers 60-minute video sessions, sold in packages of six or nine. Previously, she had offered three sessions as the smallest package, but she discovered that people needed a little more time to facilitate lasting change and learn new habits or mental patterns.

She continues to sell her book throughout Europe, and it’s available on Kindle in the United States. Jean said she receives feedback from people around the world telling her how the book helped them feel more confident to pursue new relationships.

“I found that this is a time for cleaning house because we don’t have so many distractions. Things are coming up, and we have to look at them and deal with them,” Jean told us. “This is a really good time for everybody to work on themselves.”

Jean said one of the first questions many clients ask is where to meet other singles. The COVID-19 pandemic has forced many of the world’s singles to find partners online, but that won’t last forever, according to Jean. Singles who work with her will have the tools to connect with potential partners anywhere.

“I’ve found that it’s less about giving people a secret address, and it’s more about working through obstacles that we put in our own way,” she said. “We look at the mental models and the things that are blocking them. Everyone thinks it’s a matter of ‘There’s nowhere to meet people,’ but look at yourself and see what’s stopping you.”

She said her clients often start to see that people all around them — in their yoga class or at the bicycle shop — have been flirting with them, and they never even noticed.

Meanwhile, men often ask her about how they can avoid being too forward and making potential partners uncomfortable. Jean said she works with her male clients to review different types of behavior and help them understand what’s appropriate and what’s not.

Once the pandemic eases, Jean said she’s looking forward to resuming her small group workshops called Fearless Flirting Tours. She holds the workshops in large cities, including London, Melbourne, Malta, and Edinburgh. The workshops take 12 people out into the streets to actively teach them how to flirt in real time.

“The live, practical aspect of the flirting tours is powerful because we challenge what we think is true vs. the raw reality of what is actually true. This frees us to break out of old mindsets,” she said.