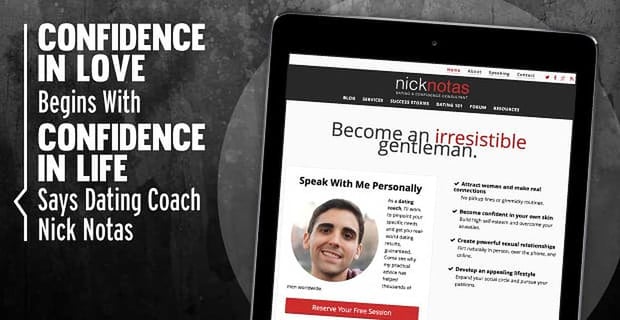 The Short Version: The confidence required to walk up to a stranger and strike up a conversation comes from within. In his years as a dating coach, Nick Notas has learned that the first step in helping his clients be better daters is to help them gain more confidence in themselves so they can show their worth to others. His method emphasizes honesty, vulnerability, and embracing social situations as opportunities to meet new people and potential partners. In the past 10 years, his focus has shifted more toward life coaching and motivational speaking — as well as incorporating more female points of view to his content, furthering the reach of his overall message.

Being likable or charismatic or engaging doesn’t require you to change who you truly are, but it does require a shift in mindset. Afterall, changing your mind doesn’t actually change your personality.

If I choose mint chocolate chip ice cream as my new favorite instead of cookie dough, does it fundamentally change me as a person? Of course not. Do I still like ice cream and its various delicious flavors? Most definitely. The same is true for becoming the kind of person other people want to be around, whether it’s in dating or in other aspects of our social lives. Having been successful in shifting his own mindset, date coach Nick Notas is on a personal mission to help men learn how to flip the switch that builds magnetism.

Life and date coach Nick Notas helps daters in Boston and beyond gain confidence in themselves.

When we spoke with Nick recently, he explained that he has always been interested in relationships, specifically romantic relationships with the opposite sex. “I never had a cooties phase,” Nick laughed. “I remember trying to pass love notes to girls in first grade.”

At 19, though, a series of unfortunate events unfolded: He had to leave college to move home and help out his family, his previous circle of friends was non-existent because they were still all at college, and his girlfriend had just dumped him.

Nick needed to adjust — quickly. He began to study the ins and outs of attracting others so he could find a new job, new friends, and a new girlfriend. His success drew some attention, and that’s when he realized he could help others learn what it takes to charm people.

More than a decade later, not only has Nick just married a woman he describes as “amazing,” but, through his blog and speaking engagements, he’s also assisted thousands of clients, and influenced thousands more in reaching their charismatic potential.

From the Positives of PickUp Artistry, Nick Crafted His Coaching Style

Nick described his first foray into the dating world as working for a few organizations that specialized more in pickup artistry. He spent about four years bouncing between those companies before starting his own coaching service based on what he thinks daters should focus on.

“I realized very early on that pickup artists were thinking of things in kind of the opposite way,” Nick said, explaining that it was more like advising people to do a list of things to be a specific kind of person that people will like. “Instead of trying to box people into this one idea, I wanted to take the principles at work and show people how to embrace that in their own lives to express their personalities as best as possible.”

He went on to detail how he quickly grew tired of the routines and tricks and lines, which made him feel like he was being fake. Honesty is one of Nick’s core philosophies, and it’s a recurring message throughout his blog and our conversation with him.

But he does credit his roots with a positive attribute: “For a lot of guys, if it wasn’t for the idea of pickup, it probably wouldn’t have inspired a bigger self-improvement journey in that they are told they can learn how to be social, to be more confident.”

Life Coaching — The Base of Date Coaching Success

Over the years, Nick has learned that date coaching begins with some life coaching and psychology, a favorite topic of his. You first have to build confidence and be honest with yourself before you can approach other people. While honesty is one of the ideals Nick most values, vulnerability, Nick said, is the key to individual happiness.

“To learn how to date, it’s about learning how to be more self-sufficient, how to be more confident and communicative,” he said. “And those things apply regardless of dating — they’re life skills and they apply to being a better friend, partner, worker.”

As his focus shifted to helping clients work on themselves before winning others over, Nick rebranded his site. Formerly known as The Dating Specialist, Nick now just works under his name as a date and life coach as well as motivational speaker.

“Just in our first conversation, I could tell that Nick was in a league of his own. Nick is not in this game just to help guys get girls. Instead, he’s helping people improve themselves.” — Chris, a client of Nick’s from Massachusetts

Confidence isn’t something that can be taught,  Nick explained. It’s something that can be acquired by repeatedly putting yourself out there and meeting new people. Moving past your comfort zone to confidently walk up to someone and strike up a conversation places you in a position of vulnerability that is especially useful for helping others see your worth.

“You have to understand who you are and put that out in the world,” he said of practicing vulnerability.

The other overarching aspect of Nick’s philosophy is being a gentleman because, as his site says, “like attracts like.” It’s basically a restatement of The Golden Rule, reframed for dating: If you want to meet someone who is nice, you should be nice.

From A Focus on Men to Providing Broader Guidance

Because of his early work with pickup artistry, and the fact that he could relate better to his own gender, Nick has focused most of his blog and coaching on helping men build confidence. He believes men can greatly benefit from in-person coaching, so he is hosting a five-day coaching retreat called Conquer Confidence at the end of July. The retreat includes group and one-on-one coaching for up to 12 men on the Spanish island of Majorca. From hands-on experience at the local bars to exercises that help grow confidence, Nick is certain attendees will walk away with a new skill set.

Nick Notas is hosting a retreat at the end of July.

While his upcoming retreat focuses on men, he has sought to speak to a broader audience through his blog and plans to continue that trend at future meet-ups.

His readership is about 80% men and 20% women, mostly from North America, although he has done some coaching for Europeans. Regardless of where his clients or readers live, he suggests everyone try to get out of their own minds and into the real world to try to just talk to people.

“I like encouraging people to meet people in the real world because the more you meet people, the easier it gets,” Nick said. “You have so much more at your disposal in person — body language, tonality, humor, inflection.”

Nick told us his blog topics come from the hundreds of clients he coaches each year, something he experienced personally, or from the 10-20 questions he receives via email each day. His soon-to-be wife reads over most of his writing, and he welcomes her critiques and female perspective. Before penning any new entry, Nick said he asks himself, “How can I provide real value?”

Success for Nick = Realizing Your True Self & Making Connections

The process of transforming from wallflower to the most interesting man in the world is easier than you may think. Confidence, described by Nick, is a mindset — you have to choose to feel worthy of the attention you desire.

Nick Notas offers several resources on his site, including an e-guide for texting and approaching women.

Flipping the switch from negative to positive makes all the difference in the world, and doesn’t actually require you to change who you really are, which Nick knows to be true because he’s done it. In his coaching, Nick suggests being honest, embracing your true self, and being vulnerable as the beginning to a happier and more confident life.

Over the years, Nick has learned that all connections, even the casual ones, are still relationships, and relationships are all built on the same stuff — honesty, vulnerability, and respect.

“The reason I do this and am so passionate is because I’ve seen it happen a thousand times,” Nick explained. “It starts with, ‘Hey, let me learn how to date and meet women,’ and it ends up becoming, ‘I’m so much happier as an individual.'”