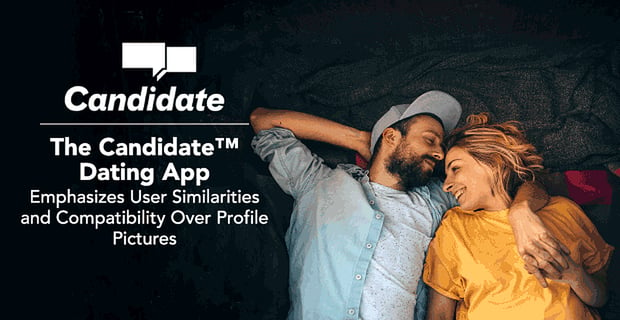 Short version: The founders of Candidate set out to create an app for daters who were tired of superficiality. Instead of focusing on profile pictures, Candidate asks users to create a series of questions for potential daters to answer. Then the user ranks the answers and initiates a conversation with the individuals who provided the most compelling responses. Candidate has seen much success not only for its unique platform but also for its friendly working environment. After seeing its popularity explode in German-speaking countries, Candidate is setting its sights on worldwide expansion.

While many dating sites heavily emphasize profile pictures, Candidate differentiates itself by highlighting its users’ cleverness through a unique question-and-answer format.

The app invites users to create profiles that include up to five questions they find useful in sorting through potential matches. The questions can range from “What’s your favorite movie?” to “What do you do when you finish a roll of toilet paper?”

Users develop these interesting queries to gauge respondents’ personalities, according to Markus Mellmann, Co-Founder and Head of Marketing for Candidate.

Markus Mellmann, Co-Founder and Head of Marketing for Candidate, said he’s proud of the dating app for shaking things up.

“Some questions discuss how you would raise your children, where you want to live, what a relationship looks like in your mind,” he said.

The idea is to create questions that both entice respondents and give users a way to winnow down potential matches. Up to five respondents — called candidates — can answer a user’s questions.

Once candidates post their responses, the user can rank them, start chatting with — and potentially date — those who are most compatible.

“After the creator rates the answers, he or she will see the candidate with the best ratings, and that’s the first time he or she sees the profile of this candidate,” Markus said.

This question-and-answer format is different from any other app on the market, which is precisely why it was developed.

“Most dating apps are based on superficial values,” he said. “Of course it’s important to know what people look like, but we wanted to create a dating app to help people get to know each other in a more meaningful way.”

Candidate is already an incredibly popular app in German-speaking countries.

“Our typical user is about 25 years old, and we have a 60% male user base, and most come from German-speaking areas because we started in Austria.”

Users appreciate Candidate, available on both iOS and Android, because it offers them a refreshingly unique experience in the world of dating apps. And while the platform is centered on the question-answer feature, users have two ways to use the function.

“The first is you see the user’s profile; then you see their questions. If you want to get to know the guy or the girl, you answer the questions,” Markus said.

If you answer the questions, the user has access to your profile, as well as your answers. Based on your profile and responses, he or she can decide if you’re a match.

Candidate helps users get to know each other through questions and answers.

“In Challenge Mode, you create games and users can answer questions without knowing who is asking them,” Markus said. “We give users the opportunity to get to know each other based on interests and mindsets on specific topics.”

Candidate continues to develop new options for daters to move beyond profile pictures by looking to its employees and sharing ideas across departments.

“We all have a little bit different mindsets,” Markus said. “We’re a very mixed company, and we try to get input from all departments. If we want to try a new marketing strategy, we ask our IT guys, ‘What do you think of the plans we’re working on right now?’ In our minds, it’s important to get many different views. That’s how we make our decisions. “

A Company Staffed by Friends

Candidate has a more cohesive vibe than other dating apps because of how it started — as a collaboration between friends.

“At first, we wanted to develop a question-and-answer game. It didn’t have anything to do with online dating,” Markus said.

Forces in the app market prompted the team to consider a question-and-answer-based dating platform. When two of the original developers got back into dating, the platform started shifting toward finding romantic matches for users.

“While testing some prototype rounds, we also recognized our test users were interested in getting to know each other,” Markus said. “At the same time, two of our guys’ relationships switched to single again. So, we ended up creating one of the biggest dating apps in the German-speaking world.”

Since Candidate’s inception, its team of developers has maintained its camaraderie — both in and outside of work.

“We’re a mixed company. We’re not just colleagues, we’re friends,” Markus said. “We like to go get a beer after work or meet at the pool if the weather is nice. That’s a great approach for our development.”

“One of our great success stories happened to one of our founders, Anna,” said Markus. “She met her boyfriend on Candidate. It looks like she found the love of her life using her own app. And we got to help find someone for her.”

Candidate is Expanding From German-Speaking Daters to a Worldwide Audience

Next for this pioneering dating platform is a website update and an app makeover that will further distinguish the platform’s different question-and-answer modes.

“We are privatizing, but we still want to offer our main functions for free,” said Markus.

Those aren’t the only big changes on the horizon for the dating platform. As Candidate has grown in popularity, it has also started attracting users from other areas of the world.

“We are seeing more users coming from the US and Denmark,” he said. “The US is a particularly big jump for us.”

The growing number of users outside of German-speaking countries shouldn’t be surprising. Users have praised Candidate for its individuality in the glutted dating app market.

“It’s a great feeling to help people,” Markus said. “We receive a lot of success stories by mail. People write to tell us that we’ve helped them find the love of their lives. When we receive messages like this from people who are very thankful, we see that we are changing lives. That’s just a great feeling.”