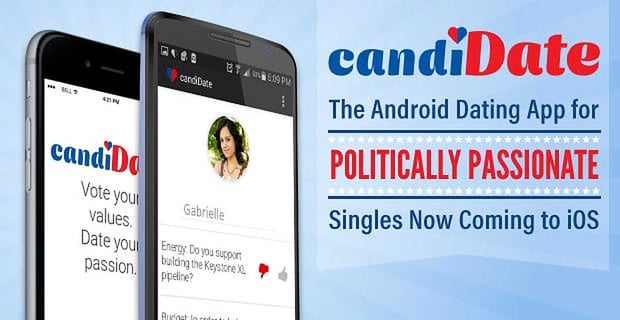 The Short Version: While it began a few years ago as a hackathon project to benefit Rock the Vote, the Android app candiDate is thriving. Soon to be released for iOS, candiDate seeks to connect singles with politically similar matches because if you’re passionate about certain values, finding someone who shares them can make fostering a real connection even easier. The goal of the app is to match users based on their answers to an initial political survey while getting people talking about and participating in the election process.

Have you ever told someone to unfollow you after they posted something to your social media that you didn’t agree with? Was that something a conflicting political idea?

When you are single and passionate about politics, you’re probably looking for someone who shares your values regarding the big picture politics affecting society rather than wanting to spend time trying to change your date’s fundamental beliefs. (Unless, of course, you enjoy debating politics and wish to do so regularly, which actually can be done successfully — just look at the 20+ years James Carville and Mary Matalin have made it work.)

So if you share your political leanings across social media, or if you think a campaign rally is a great first date, you might want to try candiDate as a way to meet your next match.

The app was created during the 24-hour social good hackathon Causathon, wherein Rock The Vote was seeking a way to better reach the millennial audience, explained Michael Bellavia, one of the app’s co-founders and its current CEO.

CandiDate incorporates quick access to voter registration and election rules while providing a way to find singles with similar political leanings as you navigate the app via a simple Tinder-type design. While originally created only for Android, the app will soon be available for iOS.

The candiDate app helps get more singles talking about politics together.

“We give you the person who is the closest match to you, but if you burn through them, you’ll gradually get to people who are further away from you politically,” said Michael of candiDate’s matching logic. If you’re looking for someone across the aisle rather than a match based on shared beliefs, you can click through to the next profile until you reach those who disagree with you on certain topics.

Right now, more than half of candiDate’s users are between ages 18 and 35, its target millennial demographic. The gender split on the app is about 60% male and 40% female, and Michael believes breaking the ice comes more easily and naturally on the app because users are presented with a match based on the fact that they have something in common.

15 Days to Chat With Matches Based on Political Survey Responses

While traditional speed-dating can be fun, it comes with two major pitfalls — offering completely blind matches you must try to connect with and then fostering that relationship in less than two minutes.

The beauty of candiDate lies in the fun of it still feeling like speed dating, but because it matches users based on political sameness, there is an familiarity that helps reduce the awkward, get-to-know-you phase.

Embedded throughout the app are reminders of the political process, such as registering to vote.

Once you sign up, you’ll be prompted to vote up or down your views on the issues that matter most to you. Each issue is categorized by overarching theme such as energy, economy, students, and more with questions asking if you support, for example, the building of the Keystone XL pipeline.

Then the app presents you with a list of ten different members of the House of Representatives and Senate whose voting records align with your beliefs. You again vote by swiping “yay” or “nay” on these politicians to bring you to your actual matches — singles who have taken similar actions on the app.

In order to foster a deeper relationship with each match, users are presented only one at a time for the 15 days communication window. If you don’t take action and chat within those two weeks, you will automatically be shown the next match in order for you to find someone you do end up connecting with.

Born for the Social Good — The Creation of CandiDate

A few years ago, Michael entered the Causathon as a representative of his consultancy HelpsGood, which has created marketing plans and creative content for the Ad Council, Keep America Beautiful, and Smokey Bear.

Everyone at the Causathon was there to support one of the of many causes in need, and in Michael’s case, he chose to support Rock the Vote. Two other people — an engineer and a designer — joined his team to create something for Rock the Vote that would be a disruptive way get more young people interested in politics and voting.

In 24 hours, candiDate was selected as a finalist, and Michael brought the app to his HelpsGood firm as a passion project for anyone interested in lending a helping hand. Doing good runs deep in the veins of Michael and his team, so adding candiDate to their offerings made sense, and many of his colleagues jumped on board.

The app has since been developed for iOS (due to the time constraints of the hackathon the original development was only for Android) and is pending release in the App Store.

From hackathon finalist to fully functioning app with over 50,000 downloads, candiDate combines political interest with dating on a platform to help users connect over what matters most to them.

Because the app attracts people who are politically minded, most users are looking for an actual relationship rather than a hookup. By finding someone with similar values and beliefs, making that deeper connection becomes easier.

While you don’t have to date within your own political party, or to find someone with similar beliefs, Michael thinks paying attention to those details, especially if you’re passionate about it, definitely helps break the ice and pave the way for a relationship.

He recognizes that his app is niche — not only is audience single dates, but they also should have strong political leanings. Niche dating has become increasingly popular as singles seek matches that are guaranteed to be more like them, and Michael hopes to eventually use the candiDate concept and platform to help daters find each other based on other preferences like their Netflix queue or favorite books.

“Instead of keeping up with a ton of virtual relationships, we want to help people really find the ‘one’ based on true passion,” Michael said.